Upasana Jain on Rain and Windowpanes Upasana’s background in design helps her in structuring her frame. Photograph/Upasana Jain

Upasana Jain speaks to Chandni Gajria about her love for design, architecture and her shift to photography with the series Mumbai Monsoon.

While studying architecture in Mumbai in the late 90’s, Upasana was introduced to film photography. “I captured my first images with a Minolta 35mm SLR and also learnt to develop photo in a darkroom.” After moving to USA and being introduced to digital photography, Upasana did take a lot of photos during her travels but… “ I drifted away from photography as a medium of visual narration. Then in 2009, while in Mumbai, I rediscovered photography through the photowalks I attended.”

For the Love of Monsoons
While growing up in Mumbai, I remember monsoons to be the most awaited season after the brutal summer heat. First rains were always very special.

Getting drenched in the pouring rain, gorging on garam pakodas, corn and making paper boats were a few things I would look forward to. Even the change in landscape brought out the romantic side of nature. Hence, after moving back to Mumbai after a decade, I was very excited to capture the first rains of the city. In a way, my nostalgia for monsoon had already taken over me and a theme was already developed in my mind even before the monsoons actually began.

Watching the downpour at home, office or while driving to work from windows brought back old memories of my experiences in the city’s rainy season.

The washed out sepia tone and colours really bring out the mood of the monsoon throughout the series. Photograph/Upasana Jain

A Visual Diary of the City
Upasana’s series Mumbai Monsoon is a visual diary of the city during one heavy downpour. What’s interesting is that the photographs were shot instantaneously and the series was a spontaneous effort. “The series was born on a day when I was heading to work. However, what was suppose to be a fifty minute ride to my office, turned into a three-hour commute.

While still stuck in traffic, in a sort of moving car, Upasana started making photographs of the scenes she saw through the rain drenched window. “I had nothing but my iPhone and I used its camera to create these images. With closed windows and rain dripping over the glass, a painting like visual seemed to unfold before me. I saw trees dancing in the wind, people running to find shelter and streets covered in rain. Each and every scene looked beautiful.”

From an Architect to a Photographer
It is interesting to note that Upasana spent a decade living and working as an architect in the USA. However her love for photography caught up to her soon. After toying with photography as a hobby, she finally ventured into it professionally and has been freelancing since 2011. Today, Upasana has her own design firm which is based out of Mumbai.

Designing Structures or Photography?
“Although I love architecture and designing structures, it is still a struggle every day. Photography compared to that is a breeze. Its therapeutic. Photography is everything what architecture is not. I won’t say no to a design project, but I’ll never refuse a photo opportunity either. I guess I can have both the worlds in my palms.”

With these pictures, Upasana has worked the constraint of being in one place to her advantage. Photograph/Upasana Jain

• Make Photos Everywhere : No matter where you are or what you are doing, there is always a story to tell. If you are bored, start by making one picture in your surroundings and you will automatically will be inspired to make another one with better composition and settings.
• Edit Your photos : Not heavy postprocessing, but just because you have photographed the same scene twice does not mean you have to keep both images. Learn to sort the best and edit out the bad pictures.
• Work With Similar Tones : While chalking out images for a series, make sure that the colour tones and effect you apply are similar and that images flow well together.

Fun Tricks To Try
If you are confused about tilted horizons and straight lines, do not fret! Go to your settings in your camera app and turn on the ‘Guidelines’ option. The grids will appear.

About Upasana Jain
She gets her inspiration from the works of Ansel Adams, Ezra Stoller, Iwan Baan, Henri Cartier-Bresson and Pablo Bartholomew. The lives of Jain monks and different types of Jain temples in India also interest her. She loves photographing her three-year-old daughter Shriyaa. 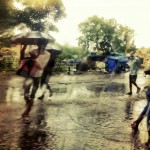 Being on one side of the window brought more focussed attention to what I was photographing. Photograph/Upasana Jain 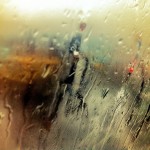 Even with so much condensation on the glass, this picture creates a mood of the rains in the city. Photograph/Upasana Jain 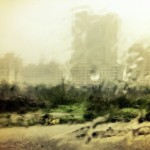 Upasana did not wait for any spectacular object to pass her way. She gave a chance to anything that she saw and captured it. Photograph/Upasana Jain 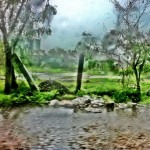 Upasana believes that a camera is just a tool to see reality in a different light. How you visualise a scene, depends on you. Photograph/Upasana Jain