Pratik Pradhan: All Things Bright and Beautiful All Creatures Great and Small…

In conversation with Pratik Pradhan, Natasha Desai discovers his inherent need to photograph nature in his own unique way, by bringing his visions to light. Mating crane flies hang from a spiderweb. “At first sight the picture reminds me of a circus trapeze act,” says Pratik. Photograph/Pratik Pradhan

Author Malcom Gladwell famously propounded the 10,000 hour rule. The gist of the rule is that in order to be a master of a natural ability to do something, one must practice it for 10,000 hours at the very least. 23-year-old Pratik Pradhan has shot religiously and practiced photography for almost 200-250 days in a year, for the last five year. If Malcom Gladwell’s observation is anything to go by then Pratik is well on his way to strengthening his already keen photographic vision.

A Deep Rooted Connection
The natural world always held an allure for Pratik. He would trek and doggedly explore the greenery around him as a school child. When his father gifted him a point and shoot, it opened up a path he never thought he would be on. A stint with an animal rescue group brought Pratik in close contact with urban animals, cementing his compassion and hunger to document wildlife. As a college student, Pratik would spend most of his time obsessively photographing, learning online and honing his skills. A course in photography from the J J School of Arts in Mumbai furthered his knowledge and introduced him to artificial lighting, which Pratik uses cleverly and almost unobtrusively in his photography.

He was consumed by the work of Art Wolfe, Frans Lanting and Jim Brandenburg. He also happened upon the photography of Indian stalwart, Ganesh Shankar, which had a profound impact on him. He began to delve deeper into the congruence of creativity and nature photography. “I am always thinking about how I can combine natural history and fine art together. Bringing a different kind of aesthetic to regular subjects is always exciting for me. I try to evolve my vision by learning new techniques and developing my artistic side by practicing as much as possible.”

When asked about his other inspirations, he quotes Ansel Adams, “You don’t make a photograph just with a camera. You bring to the act of photography, all the pictures you have seen, the books you have read, the music you have heard, the people you have loved.” The spectrum of light on the web of tent web spider feels like the spider is celebrating life in colours, according to Pratik. The light falling on this web lasted only for a couple of minutes. Photograph/Pratik Pradhan

The Vision Within
Whenever Pratik decides on his next subject, he spends time doing his research on it, planning a trip during the appropriate season. On field itself, he takes his time studying their movement and behaviour for a few days, before actually making pictures. Through all the research and planning, pre-visualisation plays an indispensable role. He has at times waited for over three years to make an image exactly the way he saw it in his mind. This understanding of the craft was one of the key reasons that Pratik won the Emerging Photographer of the Year Award in Better Photography’s Wildlife India Photography Awards 2017. His edited JPEGs were almost identical to his RAW files, barring minor colour and contrast adjustments. On winning, Pratik was surprised and pleased in a calm sort of way. There was no elated pumping of the fists at the awards ceremony but the presence of a quiet smile. He didn’t expect to win.

The Unseen World
While he does photograph a variety of subjects, Pratik is primarily attracted to the macro world. His interest lies in casting a spotlight on the abundance of miniscule life teeming all around us. “I want people to understand their importance in biodiversity.  Einstein said, “If the bee disappeared off the face of the Earth, man would only have four years left to live.” If my pictures emotionally trigger the viewer and help create a bond with nature, only then will I think I am successful.” Sleeping insects have always fascinated Pratik. This state of deep rest is called torpor, and is the closest behavior to true sleep that bugs exhibit. The spectrum of light on the web of tent web spider feels like the spider is celebrating life in colours, according to Pratik. The light falling on this web lasted only for a couple of minutes. Photograph/Pratik Pradhan

Always on the Move
It was almost impossible to get a hold of Pratik for this interview. He takes up anything from weddings and portraits to commercial assignments in order to finance his natue photography trips across the country. And, as with most artists dedicated to their craft, he would much rather be out shooting than doing anything else. As Art Wolfe said, “It is in the wild places, where the edge of the earth meets the corners of the sky, the human spirit is fed.”

Based in Badlapur, Maharashtra, Pratik Pradhan has previously been the overall winner of the Zoological Society of London Animal Photography Prize 2016 and has also received the merit medal in the Hamdan Bin Mohammed Bin Rashid Al Maktoum International Photography Awards (HIPA) 2015. 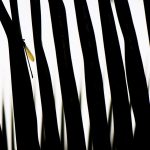 A clear-winged forest glory damselfly rests on coconut leaves. He exposed the image against the bright cloudy sky, which resulted in white background. The sillhoutted parallel stripes of coconut leaves created the illusion of it perched on a zebra. Photograph/Pratik Pradhan 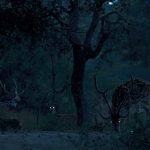 Pratik shot these spotted deers in the Keoladeo National Park. It was almost dark and difficult to photograph. He fired a flash at a very low intensity to illuminate just the eyes and create a magical, starry mood in the image. Photograph/Pratik Pradhan 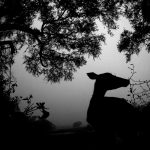 The nilgai or blue bull is the largest Asian antelope and is endemic to the Indian subcontinent. Pratik spotted this nilgai feeding on a woody plant and approached it cautiously. He set up his GoPro nearby and waited for it to enter his frame before triggering the camera remotely. Photograph/Pratik Pradhan 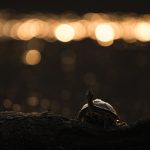 An Indian roofed turtle settles on a tree log to bask in the late afternoon. Photograph/Pratik Pradhan 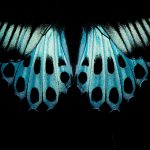 A Blue Mormon, is a large swallowtail butterfly.“I used just the right amount of flash in the dark to record the beautiful blue patterns on its wings.” Photograph/Pratik Pradhan 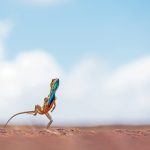 It took Pratik three years to get this image of a male Sitana ponticeriana. Photograph/Pratik Pradhan 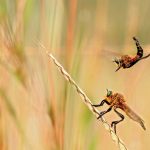 A female robber fly sits on a tip of a grass while the male hovers around her. This is common behaviour before mating, during the winter. Photograph/Pratik Pradhan