“The complexity in photography disappears once one is in harmony with their camera. After this, you can simply concentrate on expressing your freedom,” says Pierre. Photograph/Pierre Poulain

In conversation with Israeli photographer Pierre Poulain, Chandni Gajria experiences the philosophical aspect of photography and learns the secret to seeing the invisible.

For a taxi driver in Paris, France, it was one of those usual evenings of driving around. Pierre stopped the taxi at a point, and happened to notice a poster from his cab window. It was about a lecture on philosophy. So fascinated and curious was he, that he made it a point to attend it. Thus began a profound interest in a second subject. The first, of course, was street photography, which he funded by plying his taxi. Little did Pierre Poulain realise, at the time, that these two esoteric interests would become lifelong pursuits.

The Beginnings of Change
Pierre was 20 years old when he bought his first camera, a Pentax MX, a camera and brand for which he professes his unwavering loyalty. However, in a journey that has spanned more than 30 years, nothing remains the same. Life changes… and so does the way Pierre feels about how he photographs now.

“When I started out, I use to shoot anything that I was attracted to, without knowing why. Today, I have disciplined myself to control and think about why I capture a moment. Interestingly, what has remained constant over the years is my belief that capturing a frame is akin to stealing a moment from reality and from life. Some native American tribes believe that the camera can steal one’s soul.”

A Point of Contact with the Universe
A moment captured within a camera connects the photographer to the universe. This is Pierre’s inference over years of practicing photography and philosophy. He says, “When the camera freezes a part of reality, it displays the nature of the photographer, since it is the he who has captured the moment. The joy that he exhibits, while capturing this moment, is equivalent to participating in the nature of the universe.”

To See Maya and Beyond
Photography is all about transmittingsomething unquantifiable. “How can one describe a photograph? It is in black and white… we see water… the sea… at a corner, a lady wears a hat. Would this really describe an image?” asks Pierre. “A good photograph is one where the essence of the moment has been captured. A physical description cannot transmit what it feels like. What is significant is the invisible.”

The concept of the invisible can be understood from Pierre’s explanation of Maya or illusion, a term from Indian philosophy. In photography, describing what is only visible to your eyes is Maya. The sentiment behind the actual photo is the truth. “You need to see this sentiment with the eyes of your soul,” he says.

The Art of Not Recognising
A scene may trigger a memory. It may be a comparable moment or an experience. Drawing a similarity, Pierre says, “If you recognise a scene, then you might make the photograph because you have seen the scene before. On the other hand, you might not make any picture because it would be a copy of the original. Thus, with photography, as it is with life, there is a process of recognition. But it is important not to recognise.”

“One might not recognise a scene, and yet, shoot it. If the image reveals the invisible to the photographer, he will try to frame the same scene differently. He will keep shooting until he gets something satisfactory. As photographers, we know this is normal. But, if you look at the entire series of photographs, the first shot will, more often than not, be the best one.”

Pierre also believes that an individual’s intuition is what prompts him to shoot regardless of whether he recognises the scene or not. “When you see through the eyes of the soul, then you should not worry about the results,” he says.

Learning to be Lucky
If intuition helps you see the invisible, what if there is nothing to be seen? “Then, you need to be lucky. But, you have to learn how to be lucky,” says Pierre. However, we use the term luck when we do not know how or why something has happened.

Pierre narrates a tale of two friends, by the Chinese philosopher, Confucius. One friend planted wheat in September. Six months later, he reaped a rich crop. Seeing this, the other friend also planted wheat, but in March. However, he did not reap a crop and felt that his friend was merely lucky. The reason for the success of the first friend was that he had followed nature’s laws, which the other had ignored.

Pierre explains, “To be lucky, we need to stop ignoring the rules of nature and be more aware of the opportunities around us. We choose not to be receptive to these decisive moments, which is why we cannot see them. To see them, the emotions, mind and soul need to be in a quiet place.”

Philosophy or Photography?
For someone who has been deeply enriched by philosophical concepts, Pierre feels that philosophy is not just an intellectual exercise, but a way of life. He feels that there is a bond between philosophy and photography that eventually leads to wisdom. “The constant practice of photography will change our way of seeing. We shall begin to see the invisible beyond the visible, the reality beyond the appearances.”

Pierre presents a spectrum of concepts that takes you through a journey of his mind, which is an exhilarating experience. When this is mentioned to Pierre, he brushes it aside by quoting Pythagoras, “I am not a Sophos, a wise man… I am only a lover of wisdom, a Philo-Sophos.”

This article originally appear in the February 2011 issue of Better Photography. 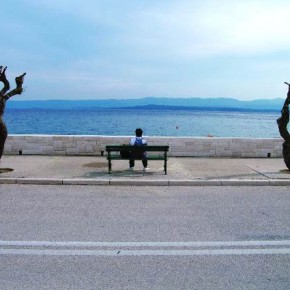 Island of Bolt, Croatia, April 2009 Pierre feels that there is something cold in this image with a dominanting blue, dead trees and a person alone on a bench. The movement of the sea and the light of the sky form an irony of hope. For him, this image is a passage between death and life. Photograph/Pierre Poulain

Croatia, April 2009 “This woman was selling postcards outside a church. At one moment, she looked up to the sky and searched for an invisible God to ask why nobody came to buy a postcard.” Photograph/Pierre Poulain

Paris, July 2008 Being the center of a group of visitors, Pierre fi nds the woman alone in her world. In this image, he sees the ability of humans to get rid of the distractions and begin a journey within themselves. Photograph/Pierre Poulain

Ireland, July 2010 This man wrote a poem on the street, in Dublin. Only after shooting the picture did Pierre realise that most of the words were hidden by the man’s body. What was visible: “Always an artist”, gave the image new meaning. Photograph/Pierre Poulain 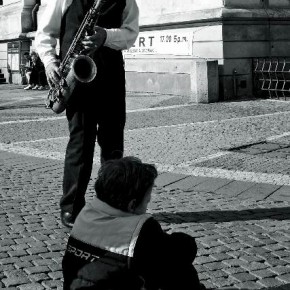 Prague, Czech republic, October 2010 “Like a freely consented master-disciple relation, the child sits to listen to the music while the old man pays all his attention to educate the child,” Pierre observes. Photograph/Pierre Poulain 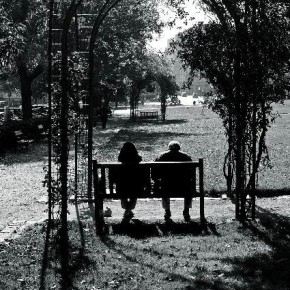 Czech Republic, October 2010 For Pierre, this photo is like the enigma of life. To him, it seemed that a mirror had been placed between the couple. “Though they sit together, each one is alone,” he says. Photograph/Pierre Poulin 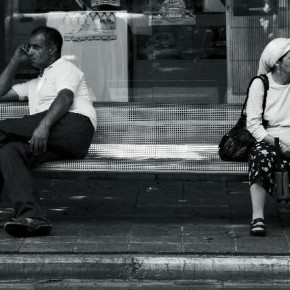 Dal Lake, Near Tibetan Children Village, 2008 Pierre feels that a photograph is always subjective as the photographer does not transmit reality as it is but, fi lters it through his own sentiment and vision. Photograph/Pierre Poulain