Manta Ray magic: manta Rays are graceful giants of the sea, and swimming with them is a lesson in humility. These mantas enjoyed feeling the tickle of the escaping bubbles upon their bellies. Photograph/Umeed Mistry

Humans have always wanted to explore the unknown. Supriya Joshi speaks to Umeed Mistry, a chronicler of the life and mysteries within the ocean.

During an underwater dive last year, Umeed Mistry saw a huge Dogtooth Tuna and Gray Reef Sharks attacking a large school of Fusilier fish. “The Fusilier were furiously swimming past the divers and the action was short-lived, but intense. I was in awe of the speed and efficiency of the attack. Though I managed to take a few shots, I could not help but lower the camera and gape at the Sharks that had three fish struggling between its teeth just a few feet away from me. It all happened so quickly, but thankfully I still have all my fingers and did not dive.” toes intact!” quips Umeed Mistry, a scuba instructor and underwater photographer, about one of his expeditions.

It Began With a Dive
Umeed was 16 when he went for his first underwater dive in the Maldives, and fell in love with the sea. He was so captivated with the ocean that he chose Marine Biology for his higher studies and went to California to pursue a degree. However, he never got to finish his studies. “I realised that my passion for the sea could not be adequately expressed through a study of biology and chemistry in a classroom,” Umeed remembers of his early days. He left California in 2002 and went to Lombok, Indonesia, where he spent seven months dive training. Upon receiving his instructor certification, he moved to the beautiful little island of Bangaram, Lakshadweep and started running a dive centre there. About his beginnings in underwater photography, he says, “I was surrounded by such an incredibly beautiful ocean; I wanted to share what I was seeing with the rest of the world that did not dive.”

When it comes to any sort of nature photography, it is important for photographers to keep themselves abreast about the species they intend to photograph. It is is necessary for one to know all about the happenings in the animal kingdom. For Umeed, whenever he comes across something he has not seen before, he tries to find some literature on the subject. “The photographic opportunities I have had are a combination of both awareness and chance. I have a strong curiosity about nature.” He has been fortunate enough to witness some of the most majestic and mysterious sights. Often while shooting wide angle images on a familiar reef, he also happens to observe certain creatures that he knows he would like to photograph with a macro lens. “I return to the same place the next day with the appropriate lens and invariably find that very same animal again; often in the very same location I observed it in on my previous day’s dive.”

A Constant Threat
Like any form of wildlife photography, underwater photography is equally, if not more, dangerous. On top of everything, there is also a threat that something may go wrong with the oxygen system. I was curious to know how Umeed dealt with these concerns. “The marine environment can be very unforgiving and hostile—at the end of the day, human beings are nothing but awkward visitors reliant on life sustaining equipment to keep them safe in the water,” he explains. Umeed has been in extremely challenging diving situations, and to him, they have highlighted his limitations and shown him just how small he is in the sea. “I would think that the greatest danger of underwater photography is the distraction of photography itself. Diving requires constant monitoring of depth, time, air supply, currents and marine life. These things can sometimes be overlooked in the search for good images, and most diving accidents are based on human error.”

Getting Closer
I have often wondered how one can capture the perfect shot because of the movement of the fishes. Some of Umeed’s works feature marine life really up-close, and I asked him how he could manage to make great compositions in split seconds. Pat comes the reply, “Many hours over many days spent watching animals will eventually result in an increased sense of comfort on the part of even the shyest animal.” Umeed compares underwater photography to bird photography, in the sense that just as a good bird photographer is able to anticipate a flying bird’s next move, so should an underwater photographer learn to work under constantly changing conditions. “After years of diving, one gets accustomed to quickly making certain key observations that then allow for more educated anticipation of a certain movement or behaviour,” he elaborates.

Being Patient, Sharing Stories
Photographing marine life also requires a lot of patience. “It often takes me three or four days to achieve a single macro photograph of a fish displaying peculiar behaviour. As for missed opportunities, any wildlife photographer will tell you that there are plenty. Thankfully, the frustration of a missed opportunity drives a great learning curve,” he said. One of Umeed’s reasons for taking up underwater photography was to share the beauty of the underwater world with everyone. His desire remains just as relevant to his work today. “If I can instil a sense of awe and curiosity in people through my images, and if they translate to an awareness and sensitivity towards the ocean environment then that is ideally what I would like my work to achieve,” he signs off. Needless to say, Umeed’s work as well as his commitment towards environmental preservation, truly makes his photographs timeless. 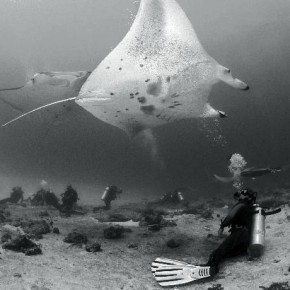 Manta Ray: Magical manta Rays are graceful giants of the sea, and swimming with them is a lesson in humility. These mantas enjoyed feeling the tickle of the escaping bubbles upon their bellies. Photograph/Umeed Mistry 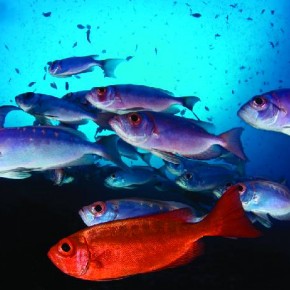 Bloch’s Bigeyes I saw this school of Bigeyes and noticed the one fish which was red. The image would not have been as striking if not for the red individual. Photograph/Umeed Mistry 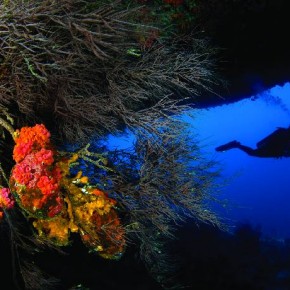 Cavern This clump of coral and sponges were growing just inside a small cavern. The diver added a human element and also defined the scale of the coral. Photograph/Umeed Mistry 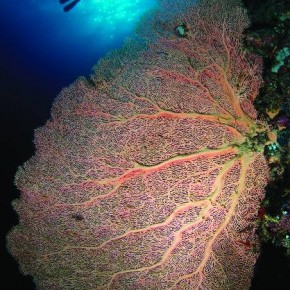 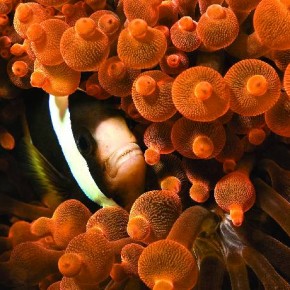 Clarke’s Anemonefish This beautiful fish took a lot of patience to photograph. Anemonefish rarely stay still and there is a great deal of good timing that goes into shots like these. Photograph/Umeed Mistry 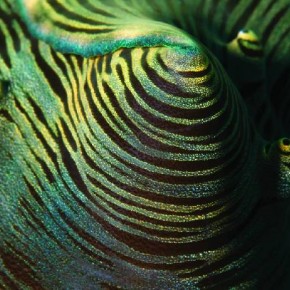 Giant Clam This macro image of a fold in a Giant Clam’s mantle highlights the strange colours and textures of the creature. Photograph/Umeed Mistry 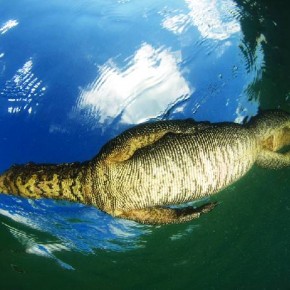 Monitor Lizard I spent 30 minutes swimming with this monitor lizard in 4 feet of water. At times he would swim to the surface to breathe and I managed to get underneath. Photograph/Umeed Mistry 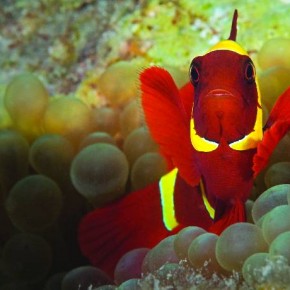 Spinecheek Anemonefish As these fish are always moving around, several frames were taken before this composition was achieved. In such situations, continuous focus is a blessing! Photograph/Umeed Mistry 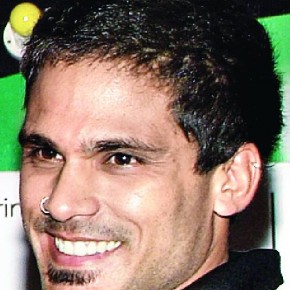