There is only one thing that Rajesh Pardeshi can imagine himself doing in this lifetime—wildlife photography. He talks about his passion with Shobhan.

Rajesh Pardeshi may not be a name known to many but he has earnestly been capturing the myriad moods of wildlife for over a decade now.

Humble Beginnings
In his early childhood, his father’s close friend gifted him a Yashica Electro 35, a range finder camera. Rajesh began by shooting people and functions at home. He also had a lot of pets at home which, more often than not were his subjects. He recalls, “We used to have a lot of pets at home. The family loved animals and I inherited this love for animals. This liking eventually deepened and thus, began my affair with wildlife and nature. By this time, I had also grown fond of photography.” Both loves combined, it transformed him into what he is today—a concerned environmentalist and a passionate wildlife photographer.

Family Business vs Passion
Rajesh never trained in photography. What he actually trained in was pharmacy. Given his family business of medicine it was only obvious that he also should have followed suit. He even earned himself a degree in Pharmacy from the Bijapur Liberal District Education Association College in Bijapur, Karnataka. But, Rajesh can rarely be found behind the counter in his father’s medical shop. The place to look for him is a studio that he runs, called ‘Photo Track’ in the small town of Ahmednagar, where he lives with his family.

Rare Moments, In depth Knowledge
A photograph of Demoiselle Cranes taken in Rehekuri near Karjat district in Ahmednagar, flying in an inverted ‘V’ formation was the starting point of his career. It is, he says, what got him ‘serious’ about wildlife photography. It also happens to be a rare photograph, which has won prizes in several contests. It is interesting to note that if you ask him about a specific photograph shot by him, he always has some insight into the creature’s behaviour or an interesting story behind the picture. For instance, while talking about the Demoiselle Cranes, Rajesh says, “Do you know why the birds form this particular pattern? There is a scientific reason behind it. This pattern helps them in flying faster. The aerodynamics aspect of this formation helps them overcome the force of the opposing wind.”

He also has some rare shots of a Striped Hyena with its cub, which he shot in his home town. “I was a little scared when photographing the Hyena. It was coming towards me while I stood in a deeply dug area. At the same time, I did not want to let go of the opportunity either.”

Rajesh is also very proud of his photographs of the Siberian Cranes that he got in Bharatpur, Rajasthan. But this pride also has a mist of sorrow. He happens to be one of the few photographers who photographed the migratory cranes in 2001–2002. “But”, he laments, “due to ecological imbalances, these birds do not migrate to our country anymore.”

In Awe of the Wild
Rajesh believes, “Mother Nature is the only real creator. The rest of us can only marvel at what she has already created.’’ We may not have been patient and quiet enough to hear the stories nature has to tell, but Rajesh barely has missed a chance, not just in getting the story right but also capturing them for posterity. According to him, “My mission in life is to capture a little slice of the beauty of nature’s varied creations through my camera”. For Rajesh, there is so much nature has created that it is impossible for one person to try and capture through a camera. “We all have to specialise in one particular area. My forte is wildlife. Although it is called ‘wildlife’, it is actually a very structured set of patterns and behaviours that help animals and birds survive, reproduce and share love with its family and society. Just like us humans.”

Spreading Awareness
Apart from shooting Rajesh also conducts nature treks for nature enthusiasts and photographers. In addition to this, he also makes presentation and slideshows for schools and institutions.

His goal in life is not limited to photography alone. He also wants to conserve and protect our environment and spread awareness about it. His disappointment is palpable when he says, “Even elders and well-educated people do not know what is their own state animal. It is disheartening. This state of ignorance towards our environment and nature must change.”

Rajesh’s ultimate goal in life is to conserve nature and protect the wildlife. He firmly believes that saving wildlife and environment is our collective responsibility. He does his bit for nature and wildlife through photography. He says, “My part in this work is to document wildlife through photography. A photograph has the ability to directly affect the heart of the viewer. This is my work—to touch the hearts of viewers with my photographs and to inspire them to see the beauty of wildlife and nature. Out of those who will be initially inspired few may later take some action to protect wildlife and environment.” 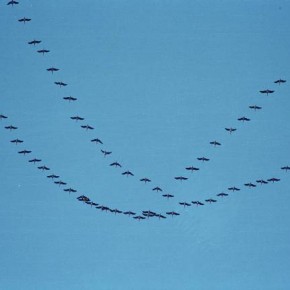 DEMOISELLE CRANE, Rehekuri near Karjat district, Ahmednagar: These birds fly in flock and they always fly in an inverted ‘V’ formation. The aerodynamics of the formation helps them fly faster. Photograph/Rajesh Pardeshi 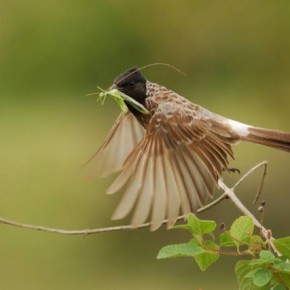 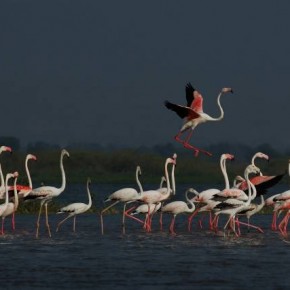 GREATER FLAMINGO, Near Aurangabad, Maharashtra: The Greater Flamingo is a peculiar bird with long neck, long pink legs, pink feet and pink feathers. The bird has a large hooked bill with a black tip that is curved down. Photograph/Rajesh Pardeshi. 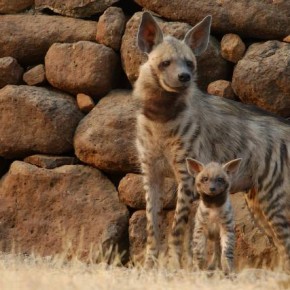 STRIPED HYENA, Near Ahmednagar, Maharashtra: Striped Hyenas are scavengers by nature and can seldom be found roaming around in groups. Striped Hyenas of India are nomads by nature. They have been declared as a nearthreatened species. Photograph/Rajesh Pardeshi. 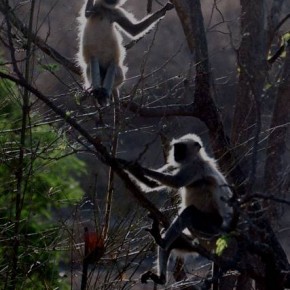 COMMON LANGOOR, Near Omkareshwar Madhya Pradesh: As the name itself suggests this specie of Langoors are common. Perching on a tree, the langoors were beautifully backlit. Photograph/Rajesh Pardeshi. 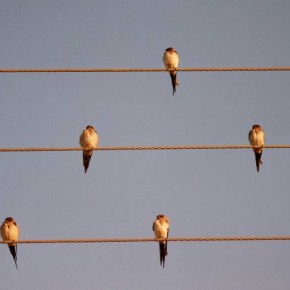 SWALLOWS, Near Ahmednagar, Maharashtra: On a winter morning, the swallow birds soak the sun sitting on telegraph wires. Photograph/Rajesh Pardeshi 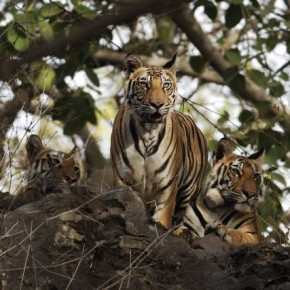 TIGER, Bandhavgarh, Madhya Pradesh: Once a hunting reserve of the royal family of Rewa, Bandhavgarh was declared the national park in 1968. Photograph/Rajesh Pardeshi