A lot of Monica’s pictures come across as disconcerting because elements seem to merge and appear from where we least expect them to. Photograph/Monica Tiwari Raj Lalwani discusses photography with the young Monica Tiwari, to understand the motivations behind her multi-layered documentary images.

Monica Tiwari’s images are largely within the realm of old-school documentary photography, but look at them closely and you will realise that they are indicative of a very interesting mind at work. A mind that is not satisfied with a straight-on shot, one that wants to tell us the same story, but with a few extra spins.

Layer upon Layer, Brick by Brick
I had always found her frames strangely attractive. I guess that’s an odd way of describing someone’s work, but it was only when I met this 25-year old for some coffee over the viewing of photographic prints that I realised why I like her images.

Ask her any question and she will give you a quick, instinctive reply. Then, she will explain it further. And then add a counterpoint. Almost as if she is building up a larger thought, bit by bit. Her photographs are similar.

Monica’s pictures tend to stir a sense of discomfort, a nagging feeling that there is a lot more to this image than your first casual reaction. Then, you notice another element, there is a clash of mood and you join the dots. And once you sense this pattern in her way of seeing, it’s almost like a puzzle that you want to keep solving.

This urge to weave a story gradually, all come together in the single image. But the germ of this vision probably comes from her love for cinema. “My heart was always set on the filmmaking course at the Jamia Millia Islamia institute. It was only by chance that I used my brother’s DSLR to shoot some still pictures, and realised that I enjoyed it.”

“I do not look at too many photos. It’s a bad habit, perhaps, but I want to search for my own identity.” Repetitions and associations fascinate her. The juxtaposition of the X on the train engine with the X formed by the passerby is typical of her pattern-loving style. Photograph/Monica Tiwari

Personal Connections
These first pictures were actually portraits made as a birthday gift for a friend. Friends and personal connections have always opened new doors for Monica. She photographed a project on her closest friends and it was selected to be shown at the Nazar ka Adda, a photography discussion that regularly takes place in Delhi.

“She was showing this project on her friends and I noticed how her portraits were carefully constructed. It almost seemed like an advertising shoot, in terms of its careful attention to detail and the overall visual feel.” I was talking to senior documentary photographer Amit Mehra, who has been mentoring Monica since the Adda event where he first saw her work.

Lazing, to Go that Extra Mile
“But then, a lot of people do that,” Amit continues. “What I was impressed by, was one particular portrait. She wanted to photograph her friend Ishaan who loved the railways, but lived in the US. She put a placard with his name on a handcart at the railway station. He was present, despite being absent. I thought to myself, here is a young photographer who is willing to think differently and go that extra mile.”

Monica laughs and tells me, “I am a lazy photographer. I keep getting scolded by Amit sir that I should be shooting a lot more. But when I am shooting and spot a potential frame, I don’t mind waiting for hours. I want to keep working on the image in my head, like someone who is constantly tapping away on a window, waiting for it to open.

She ponders a bit and adds, “I like discovery. I want to play with a viewer’s mind. Complexity attracts me. Frankly, the whole process of waiting for every element to fall in place is cathartic. It’s like settling my own mind.”

“Every once in a while, I like to feel empty. To get that knock in my guts that I don’t know anything. And then, I start from scratch.” For her, the perfect moment is a result of waiting and having rejected several other non-moments. “Sometimes, I don’t value a good picture, if I shot it instinctively and did not work towards it.” Photograph/Monica Tiwari

At a time when everyone seems to be expressing themselves in visual styles that seem to be a rejection of tradition, it’s refreshing to see Monica’s work. There are no visual tricks… no grain, no surreal blurs, no volatile camera shake that is meant to confuse the viewer as to what one is looking at.

This is straight-on photography, but still, with a point of view that is unique. She balances her personal work with a day job as a photojournalist at The Hindu, but in even the most mundane of assignments, she tries to take an approach that is less direct, and more tangential. Amit Mehra sums it up best, “The most exciting photographers are those who go beyond the obvious. Interestingly, most photographers who do this today, do not include faces within their frames. Monica is one of the few who creates that sense of non-obvious quirkiness, even while photographing people.”

About Monica Tiwari
She says that she is fascinated by anything that makes her think. The Pianist, Amelie and Khosla ka Ghosla are movies that fall into that category for her. One of the winners of the Neel Dongre Awards/ Grants for Excellence in Photography, she worked on a project on Gurgaon, for the same. 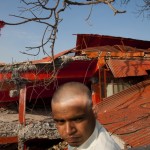 Almost all her images engage the eye in an urgent manner, making you stare at different parts of the frame and connect the dots. photograph/Monica Tiwari 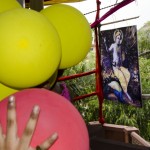 Visual contradictions and quirks can be seen in all her work, from serious documentary projects to basic travel pictures. Photograph/Monica Tiwari

Her compositions always have an element of play, a relationship between foreground and background that makes you look twice. Photography/Monica Tiwari 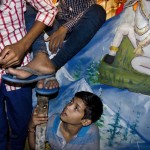 She sometimes gets really close to heighten the clash that often exists between various elements in the frame. Photograph/Monica Tiwari