Brodie’s initial plan was to shoot until his father was released from prison in 2012. The duo would have then embarked on a train trip together. Photograph/Mike Brodie Just a few days ago, I had a wild adventure in my otherwise mundane life. I boarded a slow moving train not knowing that it was headed to the yard. Alone and new to the world of train travelling, I jumped onto a platform while the train was still in motion. The inertia sent me rolling, my spectacles airborne and a crowd formed. With my heart pounding, I got up, wiped myself and never felt so alive! ‘Riding dirty face’, that is, standing in front of the train where huge amounts of dust and wind is blown into your face, is a common practice by train hoppers. Photograph/Mike Brodie

This rush, however, was shortlived as I heard about a certain American photographer. Meet Mike Brodie. Consistency in life is something that he’s looking for. He wants to live in the same place, see the same people and do the same job, day in and day out. Pretty boring, right? Think again.

In contrast, this is the same person who, by nature, is a rebel, and left home unannounced to enter the world of train hopping—the act of illegally riding a railroad freight car—in 2002, at the age of 17. Traversing America by covering over 80,000 kilometers for the next seven years, Brodie has an incredible story to tell—one that came in the form of his magnum opus, a photobook called A Period of Juvenile Prosperity, in 2012.

Young, Wild and Free
Gaining popularity after the American Civil War, train hopping is still practised by many, making it a unique American subculture. It was initially a way to get across the country without incurring any cost but today most train hoppers do it for the sheer thrill and exhilaration. Brodie gives us an insider’s view into this little-known subculture by being a part of it. There have been several who have photographed train travel, but few photographers have been as intimate and warm as he has been. By documenting his travels, he has, in effect, documented his life on the road and on the edge. Most of Brodie’s photographs underscore a sense of rebellion— a trait associated with the youth. Photograph/Mike Brodie

The teenage Brodie simply left home while his mother was working and his father in prison. As a train passed by his house, he sprinted, jumped onto it while it was still in motion and began his journey, literally, metaphorically and photographically. He returned home four days later with a beaming smile and a face that was covered in grease. Two years after his first train-hopping adventure, he began photographing his travels with an old Polaroid camera he found in the backseat of a friend’s car. Despite any formal training in photography, he shot a number of intimate portraits of his fellow train hoppers against the ever-changing landscape of America.

The Eyes behind The Viewfinder
In 2011, Brodie had just climbed off a freight train from Oakland, California to attend his first major photo exhibition in Los Angeles. Wearing a sleeveless shirt he hadn’t washed in years, Brodie refused to clean up when the director of M+B Gallery asked him to. “I want to be dirty,” Brodie grinned. Quite a grand entry into the world of art! Brodie has ensured a fine balance between filth and beauty, ecstasy and pain in his series. Photograph/Mike Brodie

After four years of riding trains nonstop, Brodie went on a trip through the Arizona desert, but strangely enough, did not feel the need to remove his camera. He was arrested soon after for trespassing a train yard and spent 10 days in prison. That’s when Brodie had an epiphany—“I’m in jail. This is cheesy. I don’t want to be in jail.” That was his final sobering thought before putting an end to his train photography escapades. For some, it might be a disappointing ending to a wild and free life they wish they had. Brodie befriended the people he met on his train journeys. Maybe that’s why they were so comfortable being themselves while he photographed them. Photograph/Mike Brodie

An Open Story
“I would like anyone to interpret my photos however they want,” he says about his work. Personally, it takes me back to movies like Into the Wild (2007) that make me want to take a step into the unknown in search of an adventure. Not my going-to-the-yard kind of adventure, but one that makes me travel rough and experience life in its purest form. Mike Brodie’s work urges us to ask ourselves a fundamental question… are we really making the most of the now?

About Mike Brodie
He became known as the Polaroid Kidd for documenting his travels on film. With no prior training in photography, Brodie takes inspiration from the National Geographic magazine and photographers like Jacob Holdt and Mary Ellen Mark.

All images have been photographed by Mike Brodie from the series A Period of Juvenile Prosperity (2006–2009). © Mike Brodie, Courtesy Yossi Milo Gallery, New York.

This article originally appeared in the September 2014 issue of Bette Photography. 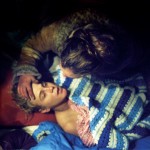 Something inside Brodie would just say “get a photo of this!” and he would go for it. Photograph/Mike Brodie 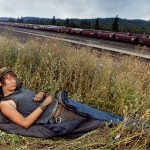 Brodie initially edits alone and then gets inputs from his friends. The editing process involves digitally scanning every image. Photograph/Mike Brodie 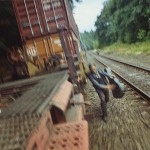 Brodie’s images appear warm and give us a feeling that they are scenes from a 70s action film! Photograph/Mike Brodie 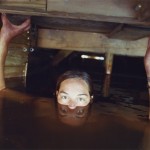 According to Brodie, train hopping is dangerous, but it’s more dangerous to drive to work. “Your safety is up to you,” he says. Photograph/Mike Brodie