Maggie Steber walks Tanvi Dhulia through her life full of adventures, one where she has documented the stories of people in Haiti, chronicled memory loss, and reinvented herself as a photographer. 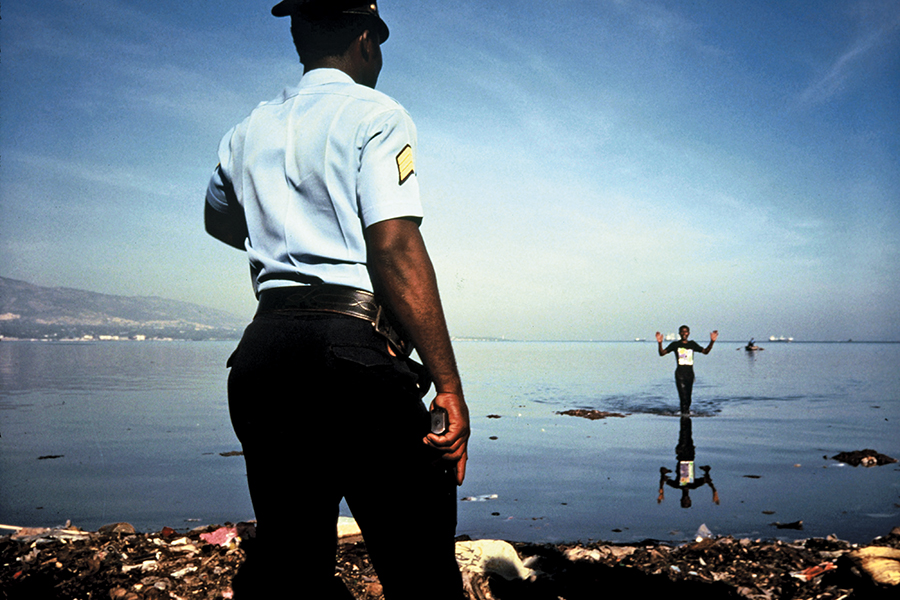 Steber couldn’t move herself to make an image of the execution. “Some days you realise you’ve seen so much violence, so much death, so much destruction, that you just can’t take the picture.”

The scene before her was tense. Two police officers were about to confront a petty thief who had tried to escape them by diving into the harbour. Realising that he could only swim so far, the accused decided to return, palms raised above his head to indicate surrender. His reflection trembled in the murky water as he warily approached the shoreline. Defeated and drenched, the moment he set foot on soil, one of the officers raised the barrel of a rifle and delivered his justice.

Haiti, as Maggie Steber likes to believe, is where the fates decided to place the portal between paradise and hell. Having documented the culture and trials of its people for over three decades, the incident she had witnessed at the Port-au-Prince harbour is one of many atrocities carved into her memory. Yet she views the tiny country with a kind of reverence. “Haiti either loves you or hates you. If she loves you, it’s because you have lessons to learn, and she will welcome you, and wring your heart out on a daily basis.”

Her work there during Jean-Claude Duvalier’s brutal regime earned her a World Press Photo award, the Leica Medal of Excellence, and helped get her foot into the doors of National Geographic. 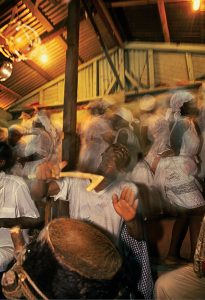 In her conversations about the country, she often makes mention of its spiritual, even magical, atmosphere. “There’s a saying in Haiti about how the population is 85 per cent catholic, and 100 per cent voodoo.” 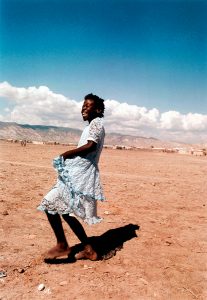 She was trying to make a “bleak picture of nothingness”, when all of a sudden, the little girl appeared in her frame, singing and dancing joyously. It reminded her how beauty could be found in Haiti, in the most unexpected places.

Eye of the Beholder
When Steber points her practiced lens at the citizens of Haiti, she shows us tales of death, chaos, joy, and even heady devotion. Through her images, we come to terms with their suffering, but are also able to look past it. We are made to realise how, behind the shadow of tragedy, are a people fearless and resolute.

The respectful portrayal of her subjects is what allows her to gain their trust. She maintains that the agony of others isn’t fodder for photography. “They are real people with real lives and they suffer in a myriad of ways that we will never begin to fully understand.” 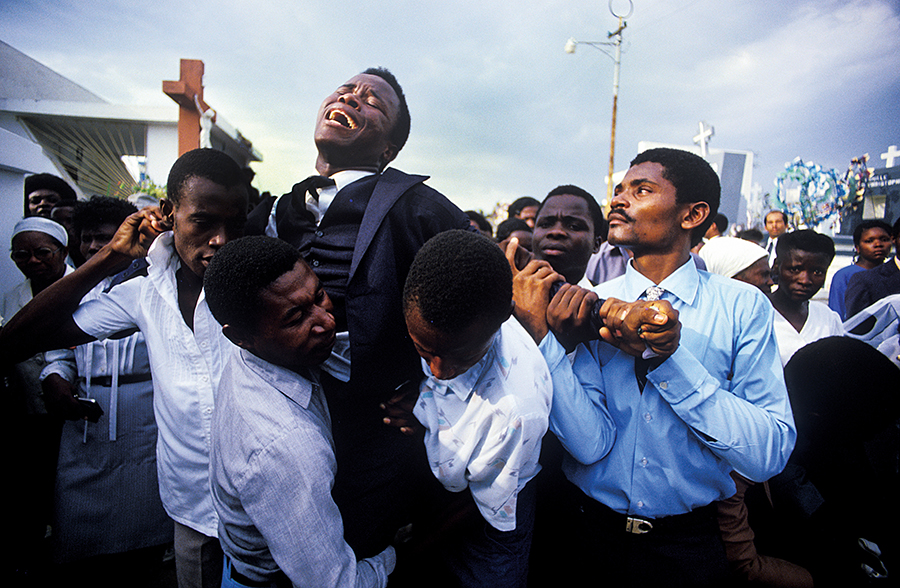 After over three decades, Steber continues to return to Haiti. For her, it is the most interesting country. “It’s a very tough place, but it also holds the most exquisite beauty, tenderness and magic.”

Steber is wholly aware of the privilege of being welcomed into their world, and is careful not to allow her perception to be tinted by the western lens. Over the years, she learned that no amount of research could truly prepare her for what lay ahead, and says that she tends to go in like a baby and learn at the knees of the people she’s photographing. “If they will let me,” she adds.

A Teller of Tales
But the ability to tell compelling stories didn’t come easily. Through the span of her entire career, Steber has worked relentlessly to become a better photographer than she was before. The cognizance to pursue this goal may have come with the rude awakening given by Eliane Laffont. At the time, Steber was a young graduate roaming the streets of Paris, hoping to be the next Henri Cartier-Bresson. But during a portfolio review for Look magazine in 1979, Laffont’s sharp criticism shook her out of the daydream. 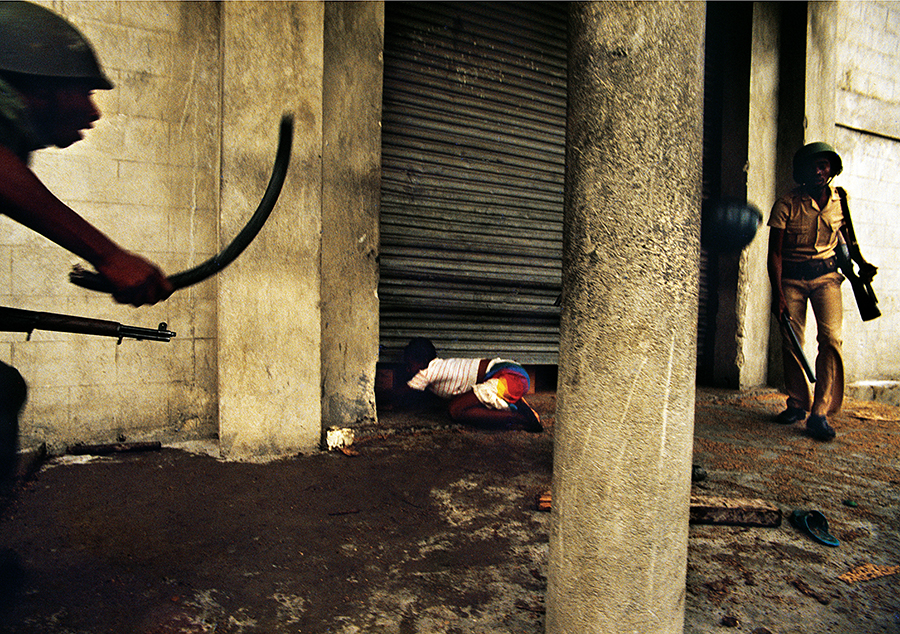 She credits this image she made during a riot in Cap-Haïtien in 1986, for transforming her life and career. It garnered a lot of attention. To her, it sums up Haiti, as it depicts, “power and fear, corruption and poverty.”

It made her realise the significance of unearthing what lay beyond our immediate lines of perception. It also drove her to look within, and question why she had been drawn to photography in the first place.

“I wanted to experience the world, to make sense of it, to see it and understand it and of course, because this is just human nature, to have adventures that went beyond my wildest expectations.” She was also curious about people and the stories they had to tell. “I found that this little machine called a camera could unlock those doors and hearts and minds of people who might be willing to share.” 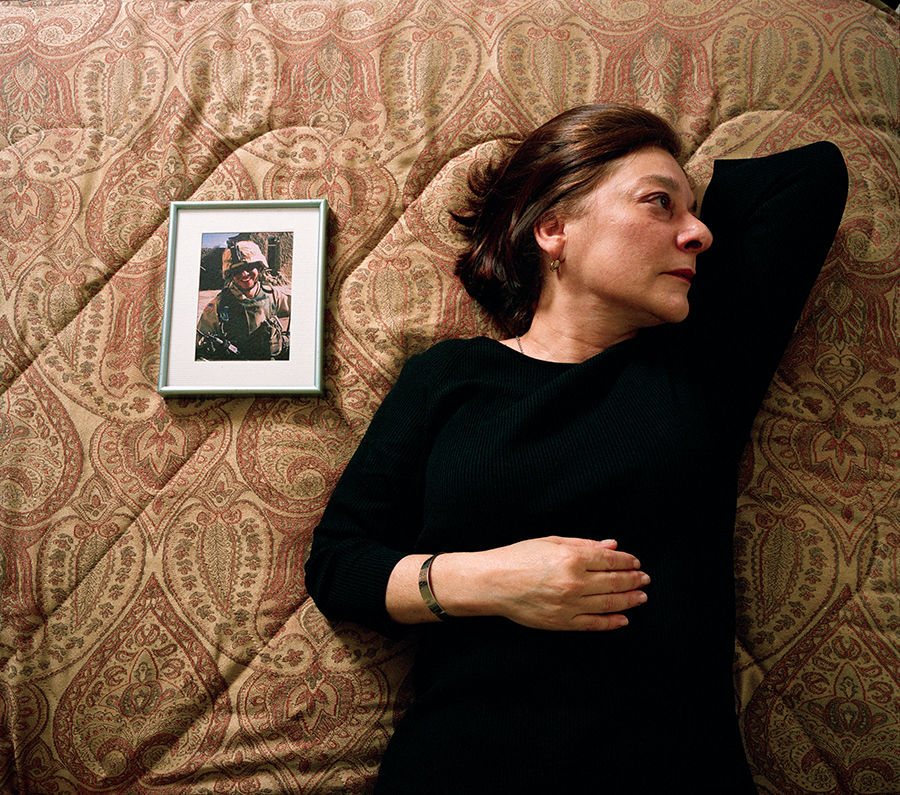 Steber doesn’t hesitate to empathise with her subjects. She made this portrait of a mother who had lost her son during the first Iraq war. On the days leading up to the making of this image, she and the mother spoke for hours and even wept together.

To Madge, With Love
She credits her mother, Madge, for encouraging her venturesome spirit. Being raised by a single parent, Steber says that they didn’t have much, “…but in our cultural lives we were rich.”

It was the heartbreak of watching her mother descend into dementia that propelled Steber to create ‘Rite of Passage’. Tempered with grief, the series of images became a way of preserving memories of her parent. Vulnerable before the camera, her mother’s dissociation from her surrounding reality, strikes a nerve. And the largely monochrome photographs lay bare the struggles of losing a loved one over a long period of time. 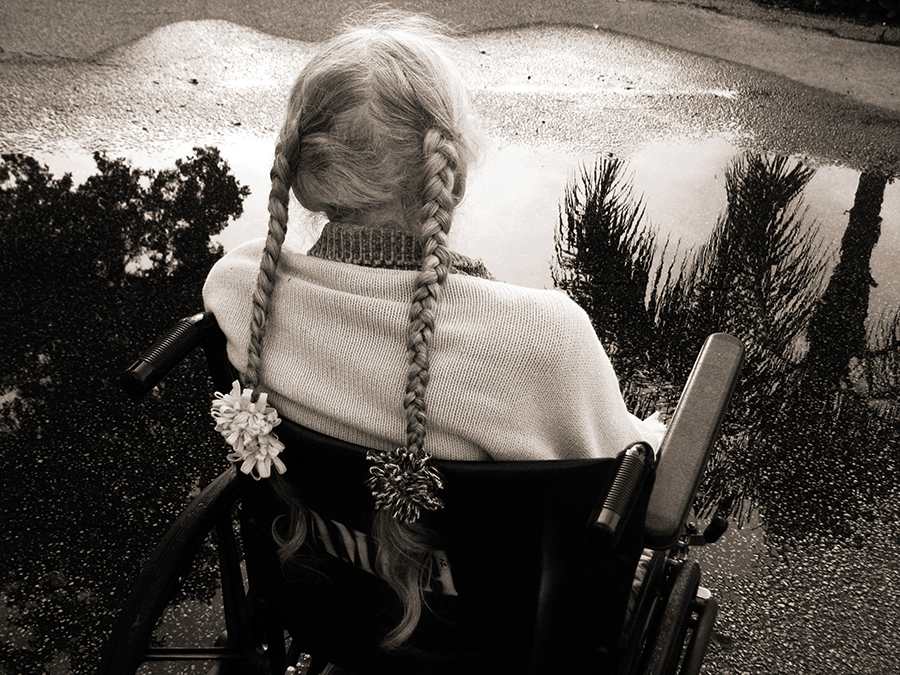 Steber didn’t want the series to seem tragic, but it is difficult to completely ignore that aspect of the story. “There was at least one tragic story: capturing the fear and pain of losing one’s memory, losing one’s self.” 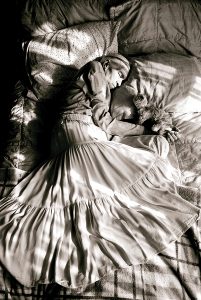 Madge Steber sleeps in bed with her stuffed kitty at her home in Florida, in 2008. Dementia and the medications she took at the time caused her to sleep most of the days and nights. 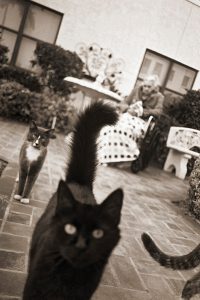 Pulp Fiction
After years of being saddled with the label of “documentary photographer”, Steber has gradually found release through ‘Secret Garden of Lily LaPalma’. While being pinned down to a genre made it convenient for her to find work, over time she felt the need to push her own boundaries.

Steber began creating images reminiscent of the ones she made when she first began. Having always been fond of science fiction and B-grade horror films, the Garden became a space to exercise her imagination. 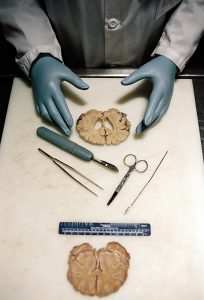 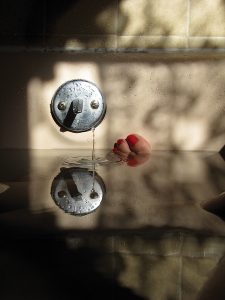 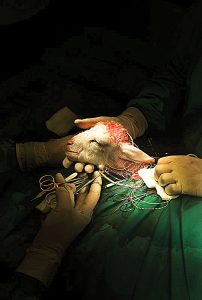 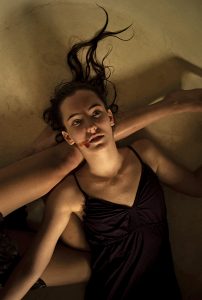 “It is my liberation from the tyranny of documentary and how I am described by others,” she explains. She admits that working on this series has made her happier than she’s been in years. Decades since she began, Maggie Steber is finally telling her own story. In it, she has conjured a powerful and invisible mistress, Lily Lapalma, who has a penchant for murder. The pictures, both in style and subject, are in stark contrast to her earlier photojournalistic work. 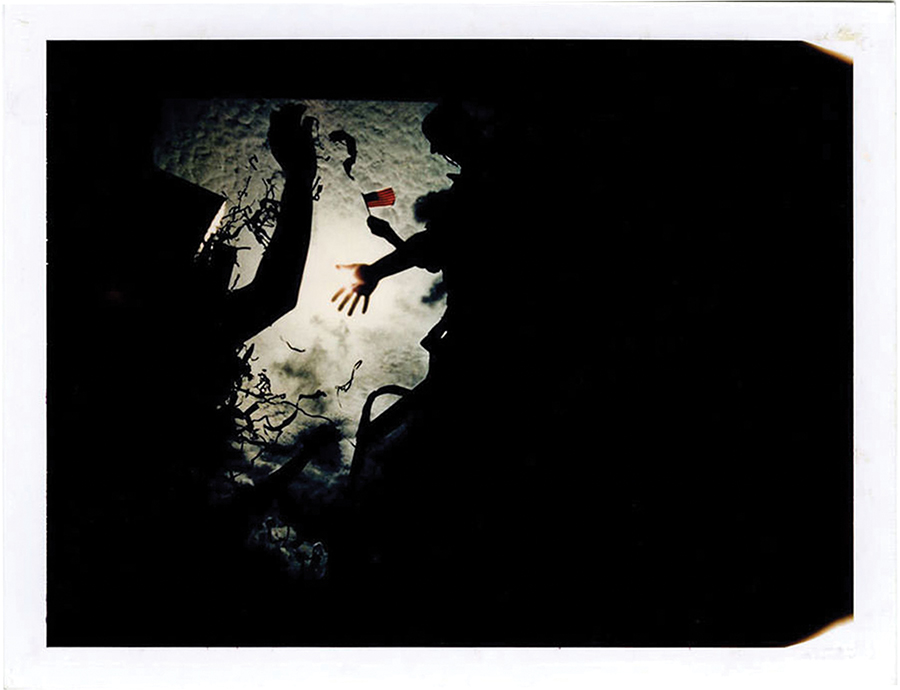 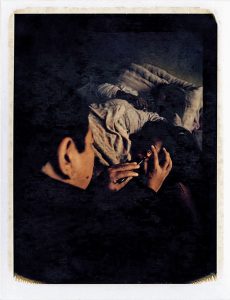 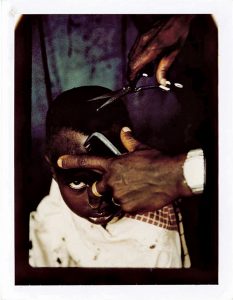 A Resilient Spirit
Unafraid to immerse herself in a project, Steber has found photography to be a long-winding affair. “You know, photography is sort of like love,” she says. “One starts out by being completely besotted with it, and thinking it’s the most extraordinary thing in the world, that there is nothing better or more important, and that there is nothing you would rather do.” But then eventually, she says, it dawns on you that it is in fact an enormous responsibility, especially when it comes to portraying the lives of others. 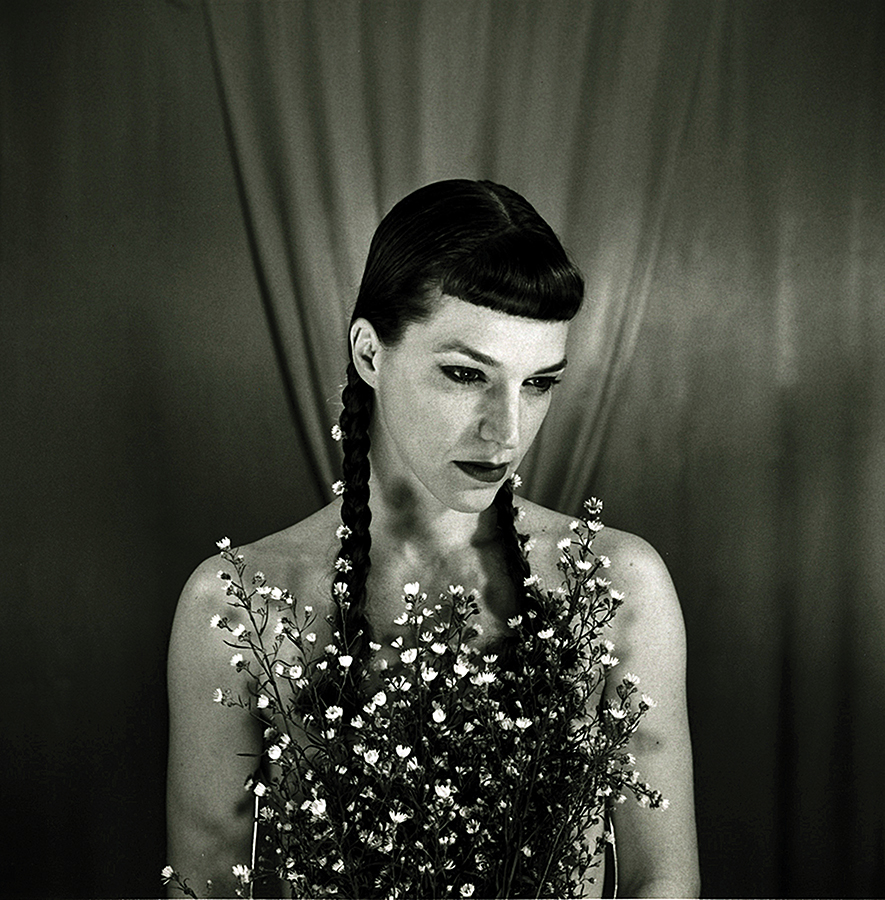 Maggie Steber’s inclination to the macabre is also a result of personal loss experienced through her life. This influence is evident in her series, ‘The Secret Garden of Lily LaPalma’, where the fictional mistress of the garden is named after her late sibling who was stillborn.

Maggie Steber carries this knowledge with her every step of the way, allowing it to empower her work. Her confidence in her own abilities is infectious, as she emphasises how one should never feel discouraged in the face of adversity. “I worked my way through school and if I could do that—work 30 hours a week and go to school full-time for 4 years, I figure I can do almost anything.”

And so, she journeys on, undaunted by what the future may hold, allowing her imagination to lead the way. 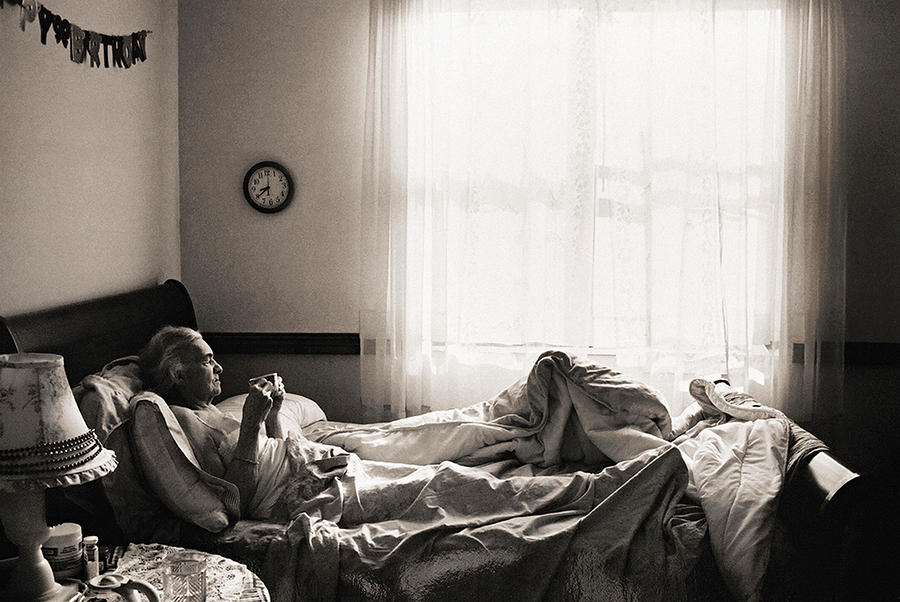 As she worked on this project, Steber began to view her mother as a completely seperate individual, devoid of her role as a parent. It startled her at first, but she drew comfort from the knowledge that they would have gotten along just as well had they met as strangers. 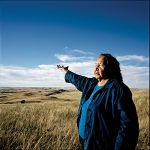 On her learnings from extensively photographing Native American tribes, she has written, “A photographer has to try to break through the visual trappings that the public, especially photo editors and magazines, expect to see.” 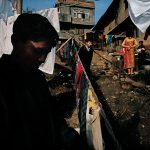 The picture depicts a man and his family, in Nepal, making use of an alley as a commercial laundry. When asked about how she knows when it’s time to conclude a long-term project, Steber said that the work itself will tell you when you are finished. “Or when you realise you simply have nothing else to say.” 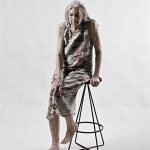 Madje Steber, mother of the photographer, sits for a portrait at her daughter’s home during a weekend visit from the assisted living facility where she resides in Hollywood, FL. Maggie Steber (the photographer) lives in Miami and is the only child of an only parent, her mother. Madje suffered from memory loss (dementia) for the final 8 or 9 years of her life. This portrait offered a cathartic moment for the photographer allowing her to see her mother for the first time as her own person, no longer her mother, but Madje, a woman and her own person, nothing to do with being a mother.

Maggie Steber has worked in 64 countries and has largely focused on cultural, social, and humanitarian stories. When not occupied with photography, she likes to sing, dance, and preserve dead lizards in her freezer. Her work has been published widely and you can find more at www.maggiesteber.com