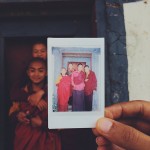 After they saw the Polaroid, these otherwise elusive monks took Tosha and Stuti on a tour to the temple chamber in their monastery. Photographs/ Tosha Jagad and Stuti Jhaveri 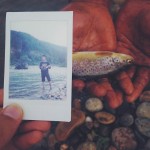 “He came to the riverside with a tin can. He threw a hooked string into the water, reeled and caught three fish like a boss,” says Stuti. Photographs/ Tosha Jagad and Stuti Jhaveri “We gift Polaroids
to the people we
met along the way
on our travels.”

Recently, my Facebook feed saw a flurry of activity from two girls who’ve been travelling and documenting their trips in an extremely interesting manner—with Polaroids and Instagrams.

Tosha Jagad and Stuti Jhaveri decided to make a trip to Bhutan and Nepal. They already knew they were going to photograph their travels and also blog about them, once they were back. They set out with a Polaroid camera and initially, the idea was to make Polaroids of the people and places they came across.

“Once in Bhutan, we met such amazingly warm people right from our first shared taxi ride that we felt the need to give something back. So we started gifting Polaroid portraits to the people we met along the way, and took an iPhone picture of the Polaroid, for our reference,” she said.

The photos are a spontaneous, impromptu reaction spurred by the interesting conversations they have, and the unusual moments they experience. Both of them decide together what will the Polaroid be about, based on what they have shared with a particular person. Tosha shoots the Polaroids, while Stuti writes on them.

“We wanted to gift them these pictures so that they could remember us by it and we also wanted to remember them, so we started making pictures of the Polaroid against a background that was relevant to the subject in order to make a complete story.”

They intend to continue this extremely personal storytelling for the duration of their trip. More of their photographs can be found on Instagram at @polaroid_portraits.