Chandni Gajria gets into the vivid imagination of Thailand-based architect Chanatip Bhandavee to find out how he creates wonders with symmetry.

When I first came across Chanatip Bhandavee’s work, I was awestruck. Each image of this architect was mesmerising to look at. I wondered, how could someone create such beautiful visuals with just a cellphone? I immediately contacted him and was excited when he agreed to be interviewed.

The Power of the Phone
One look at Chanatip’s photographic work and it is evidently clear that the inspiration and aesthetics in his images come from his background in architecture. He loves exploring and experimenting with figures and forms and uses them in a minimalistic way.

“Ever since I got a new iPhone, I started photographing more with my cellphone than I ever did with my DSLR. No matter what, I always have the phone on me to make a picture wherever I go.” The best part about cellphone photography, Chanatip says, is that he can retouch the pictures while travelling. Chanatip’s images represent a strong concept. This makes it difficult to seperate the two images from which his final photos are made from. Photograph/Chanatip Bhandavee

Two into One
The process of creating these pictures started somewhere in March 2013. Chanatip did not plan anything but preferred that his instincts take over the photography process. “While walking around the streets of different cities, I photograph scenes which interest me. I keep saving these images in my collection.” He even photographs the portraits of people separately to create a graphically sound photograph. “So, the final picture you see, are a result of two images composed together; the background and the people portraits. This is just how I work even while designing architecture. There are elements given, and one has to create a concept around it.” With these photographs, Chanatip constantly tries to represent a dialogue between man and architecture.

The Challenges of Editing
After making pictures with his cellphone, Chanatip uses mobile applications like Snapseed to edit. For this series, he made use of a photo editing application called ArtStudio. “It works just like Adobe Photoshop and allows me to merge two images—the portrait and the background, into one.”

Furthermore, I asked him if the process of editing the pictures was a challenge for him. “It is not really a challenge because I love what I do. It’s not a job for me. Photography is a hobby that I pursue and I don’t mind spending my time on making these pictures look perfect.”

The editing on these pictures took longer than what someone would spend on their cellphone. “On some days it takes me around 30 minutes to make the final image and at times it can take up to about an hour for the editing to complete.” This again, Chanatip said, depends on how complex or simple the elements in the background and portraits are. The use of black and white lays emphasis on the graphical elements in the background. Photograph/Chanatip Bhandavee

On A Personal Note
Chanatip thinks it is not really difficult to make such pictures if one is really interested in photography. “The pictures are not serious boring concepts and deal with my artistic side.” In his opinion, it is fun to make such images.

“Moreover, there is so much inspiration on Instagram that motivates you to create good images.” Although his Instagram feed is filled with architectural and graphical images, on a personal level, Chanatip loves doing portraiture.

Follow Your Instincts
The things you see, books you read while travelling, places you visit, all form a huge collection of ideas and stories. These experiences are the best inspiration one can have but Chanatip believes that not many pay heed to their instincts.

“People spend a lot of time on planning and analysing the details. While this is not a bad thing to do, analysing too much, makes the idea stale. It is better to follow what you feel is right.” Chanatip gives equal importance to the placement and the pose of the portraits in his photographs. Photograph/Chanatip Bhandavee

• Look for Various Graphical Elements: Explore your home, office or walk around your city to find graphical and architectural elements like lines, curves, shapes and forms. These elements will form a strong foundation for the backgrounds in your images.
• Keep it Simple: Make use of space in your compositions to give the eyes some rest and to create impact within the picture. Avoid clutter and use colours carefully.
• Add Objects to Create Symmetry: The use of reflections in glass and water and even mirros can help increase the actual space in your images. Mirrors are also a great way to duplicate a graphical pattern.

Fun Tricks to Try
If you want to use cellphone flash in your photos but detest the harsh light from it, place a tissue in front of the flash light, or simply tape a piece of tracing paper on it to diffuse the light.

About Chanatip Bhandhavee
Chanatip dreamed of being an architect ever since he was 3-years-old. He works part time as a t-shirt designer and even has a shop where he sells his creations. Oasis, Linkin Park and Daft Punk are his favourite bands. 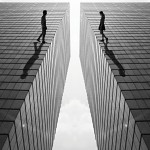 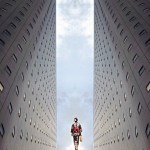 His subtle use of colours are refreshing to look at and yet this maintains the flow of the series perfectly. Photograph/Chanatip Bhandavee 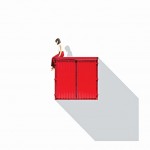 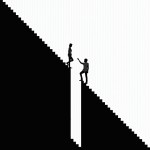 A high contrast image in itself can lend its own graphical quality to the photograph. Photograph/ Chanatip Bhandavee 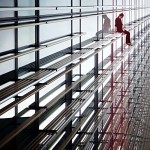 Although Chanatip’s pictures are all squares, one can try these concepts in any aspect ratio. Photograph/Chanatip Bhandavee 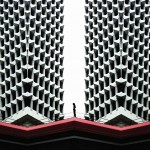 Using a proportion of lines, shapes and colours can look good when all the elements are properly balanced. Photograph/Chanatip Bhandavee