Joshua Barton: Song of a River and the Deep Blue Sea

Joshua Barton speaks to Tanvi Dhulia about artistic expression, and finding a distinctive voice for oneself in underwater photography. 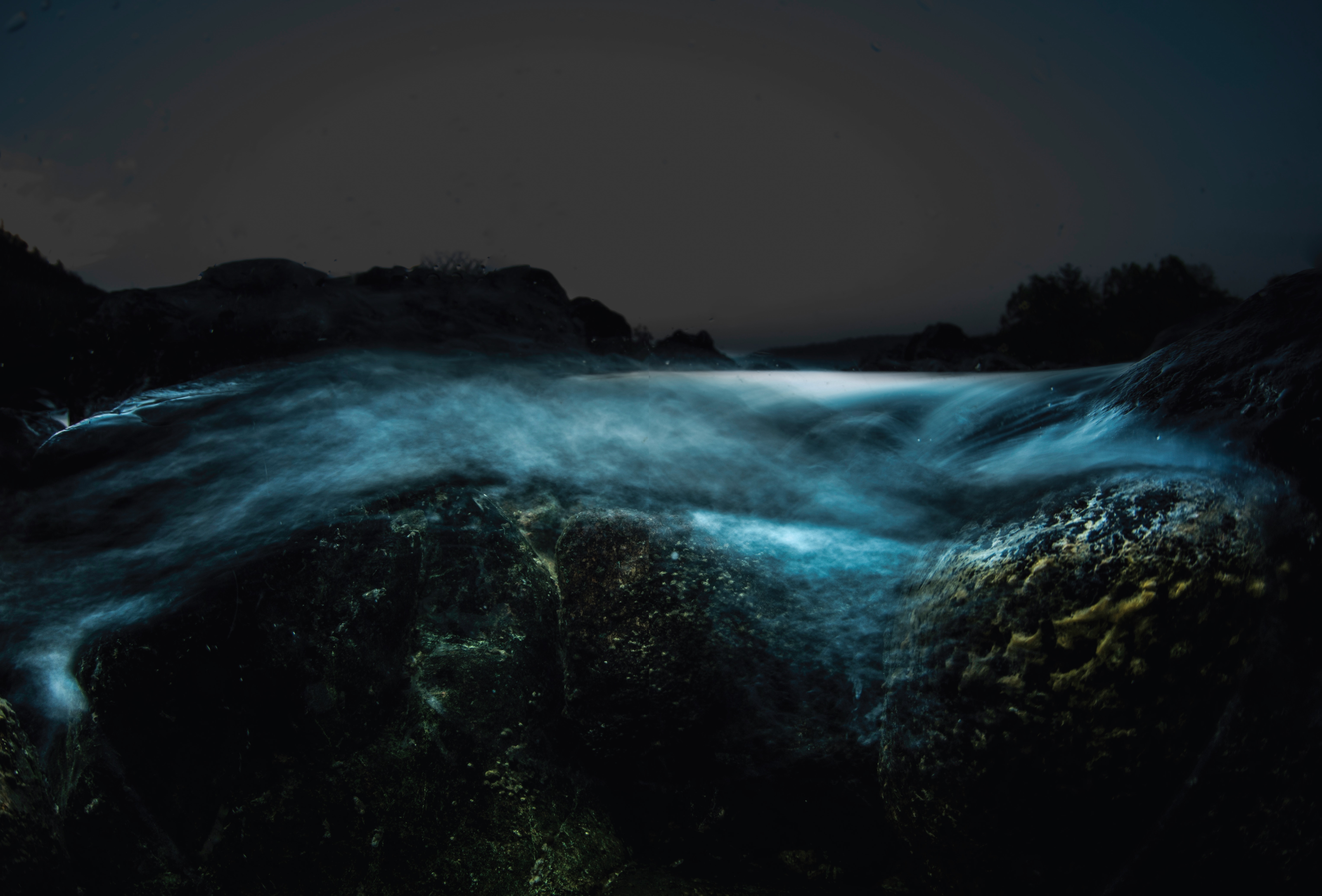 For Joshua Barton, a typical day at sea is like being at war. In the sense, he explains, that it largely consists of weighted anticipation, with a brief spell of exhilaration. He describes each assignment as “a chess game with fate,” wherein one’s ability to navigate turbulent waters in search for the ocean’s Goliaths need to be well refined. And yet, those skills will only take you so far. “You’d think that a whale would be easy to see. But not only do you not know when you’ll find it, but you don’t know if you’ll find it.”

When the stars do align, however, one must realise that locating the mammal is only half the effort. As soon as it appears, Barton must dive in swiftly, get beneath the whale without injuring himself, and stay underwater long enough to observe and photograph the being. “Luck is where preparation and opportunity intersect,” he says. If one has done sufficient planning and research, they’re better prepared to make the best of a moment when it comes along. His pictures of whales are marked by fragmented sunbeams dancing on their barnacle-encrusted skin. They evoke a sense of astonishment at what the world in the deep blue is like.

Rolling With the Tide
Making pictures undersea comes with its own unique set of challenges. To have a whale rising towards you from the shadowy depths can grip one with unimaginable fear. And to gather an adequate understanding of how light works in that environment is a massive hurdle in itself. Nevertheless, Barton emphasises the necessity of identifying as a diver first, and then a photographer. The consequences, he says, of a reckless attitude during any free diving expedition can be fatal.

Although his love for wildlife goes back to his early childhood, he began scuba diving only after he moved to India two decades ago. Now 52, it was at the age of 12 that he got his first camera. A friend of the family introduced him to photography and encouraged him to attend seminars and photowalks on documenting the wild.

Years down the line, the underwater pictures of Wilfried Niedermayr inspired him to attempt photographing whales. It took him two years to complete his research and make adequate preparations for his first expedition, and it was two more years before he got the results he had been seeking.

Early Learnings
For Barton, the decision to take initiative towards a subject that interests him comes instinctively. Raised by a single mother, he speaks about having to develop an acute sense of independence at a very young age. He would often take it upon himself to do odd jobs in order to pay for new photographic equipment. “I learnt early on that you can’t wait for someone else to have charted the way, opening it up for you. You have to just go do it.” He feels that his childhood, although difficult, helped make him more outgoing and self-reliant. He views his photographic creations as artistic works. For him, the purpose of technical prowess is not to capture a photograph fit for postcards, it is to tell a story. By striving to make images that are challenging and appear unique, he hopes to convey a sense of wonder laced with mystery. 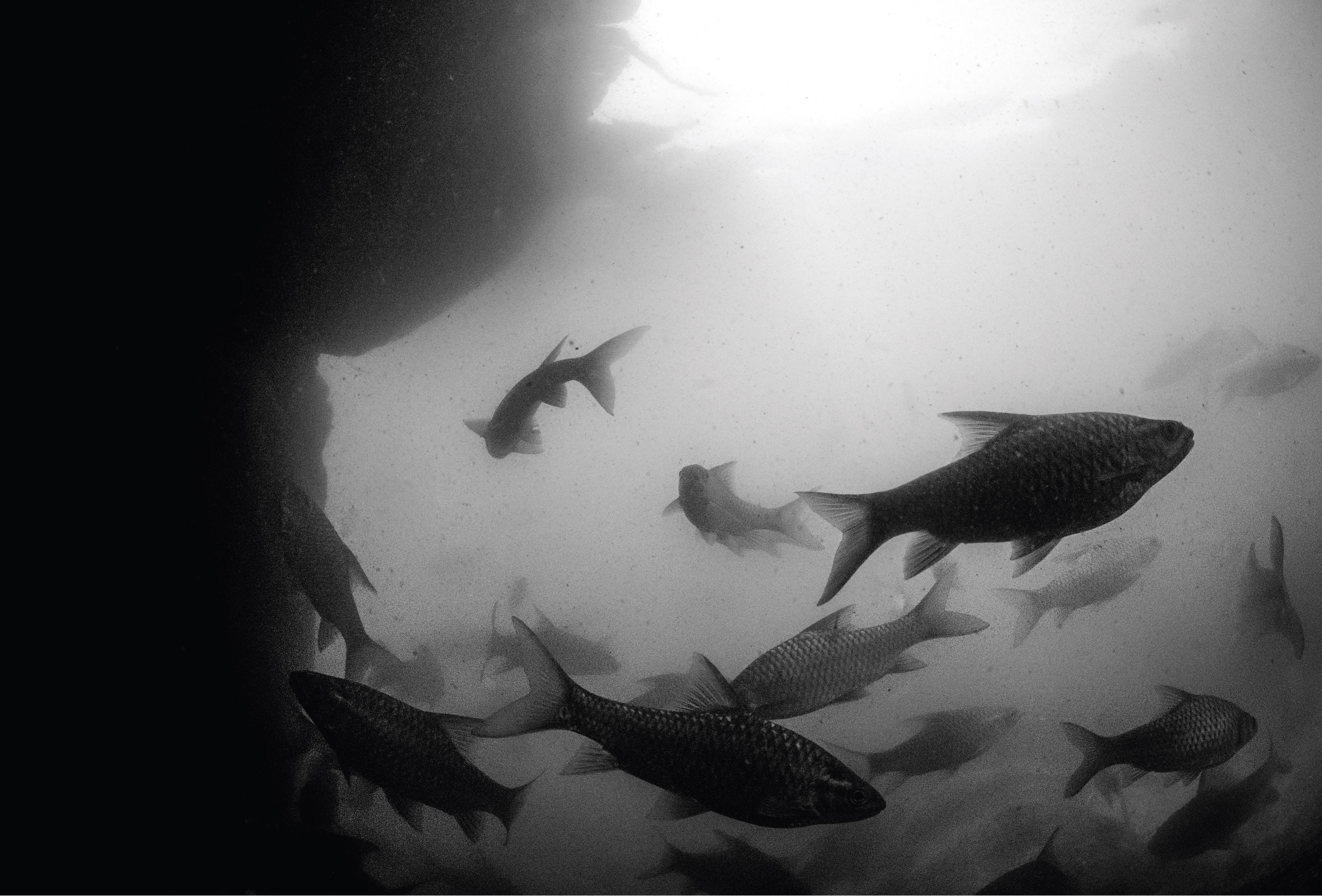 The Gathering. Deep in the turbid waters of the Cauvery River, Carnatic carp hover in the cool shadows until their afternoon foraging.

Exploring New Waters
And yet, until six years ago, he felt that his pictures lacked a distinctive voice. While he enjoyed photographing deep sea mammals, he found there was something lacking in his images. “Too many aspects of it were out of my control for composing a picture.”

But soon enough, he discovered a new-found love for the Cauvery river which flows through Karnataka and Tamil Nadu. Ever since he first witnessed it from its muddy banks, Barton had felt mesmerised. “It feels alive. I feel like I know it. I feel like it knows me. When I dive into it, it feels like a homecoming.” What first started off as a series of photographs to assist researchers, eventually grew into a passionate project for a photo book that is now in its final year of creation. Through the images in it, he hopes to depict what the river has come to mean to him. The lyrical images carry with them an almost dreamlike quality. 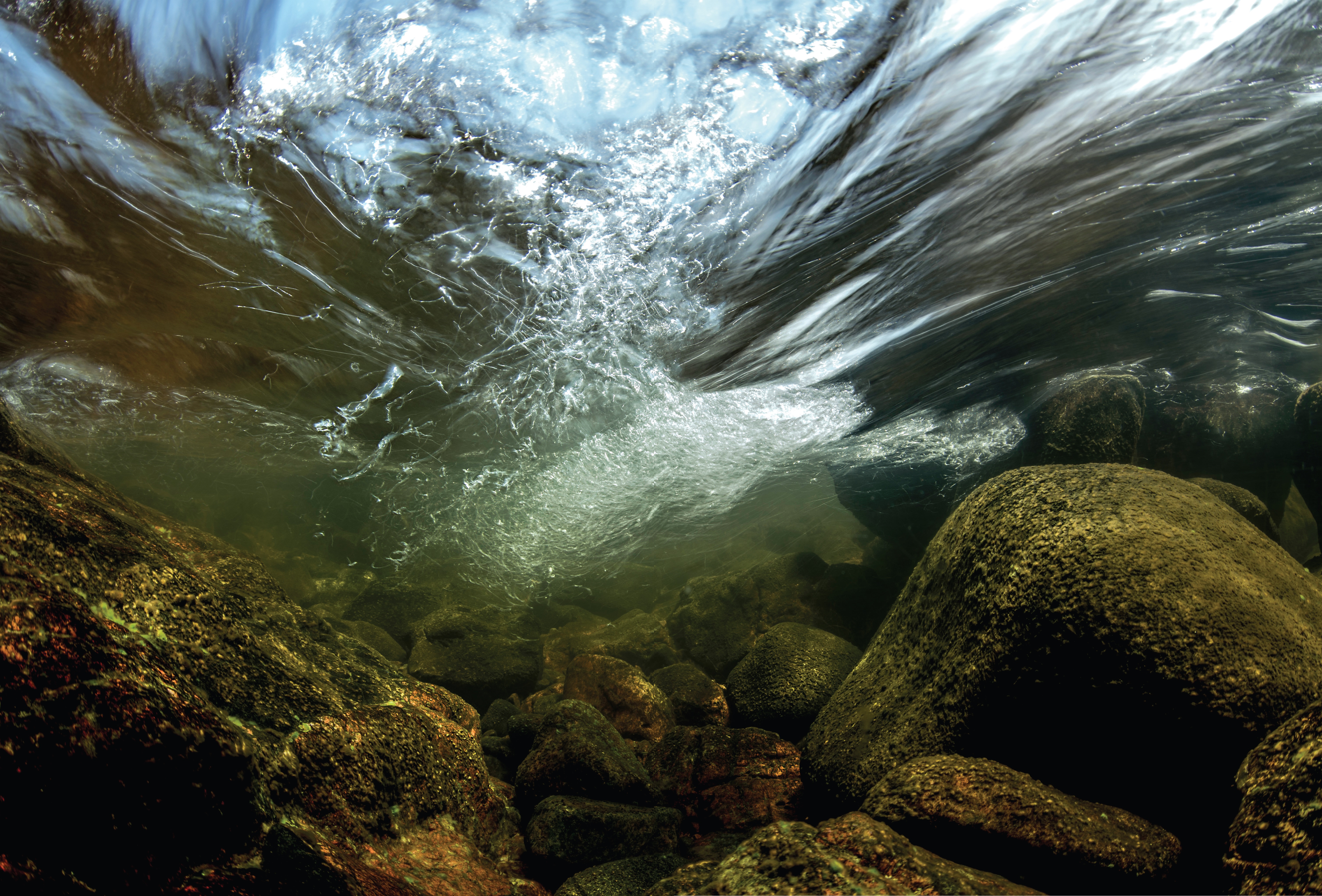 Under the Cauvery, near Galibore.

Making pictures for his Cauvery project requires tremendous groundwork, including frequent coordination with researchers to learn about animal behaviour, suitable locations and the time of the year to capture certain kind of results.

What’s remarkable about Joshua Barton’s photographs is how he can make subjects familiar to us seem mesmerisingly otherworldly. His pictures of whales may leave one baffled as to how we belong to the same reality. Perhaps this ability of his can be attributed to extensive practice with film photography during his early days of learning. At the time, due to the expensive nature of the medium, one was compelled to master how to tell a story through a single frame.

“As a photographer, you manipulate perspective when you shoot – to convey the experience more than just capturing the subject. And I think that’s okay. That’s what you’re doing as an artist.” 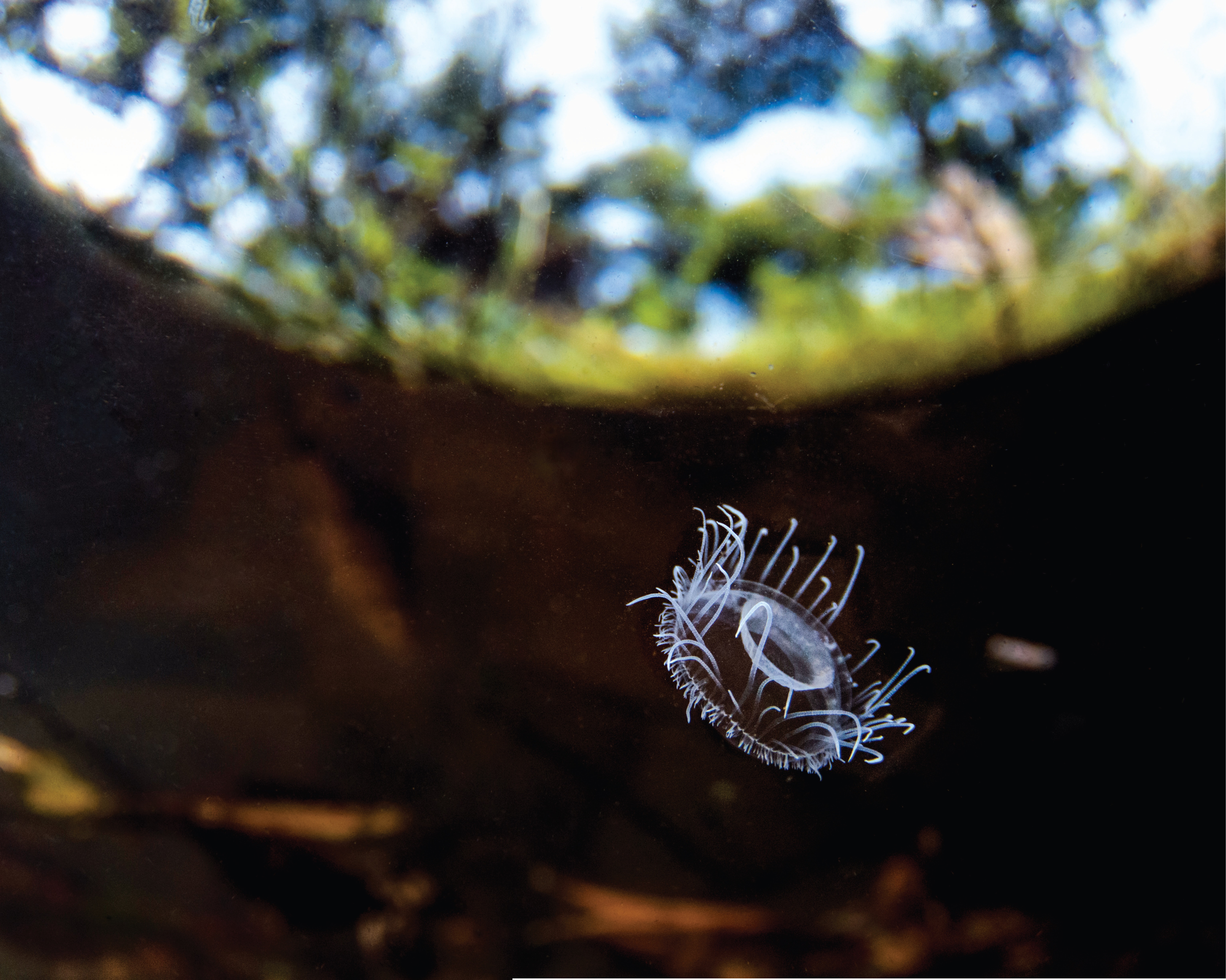 A Love for the Craft
He emphasises the need to take risks as a photographer and challenge oneself in order to improve, instead of making pictures that are perceived to be conventionally appealing. He found he could do this best when making pictures of the Cauvery. The images he makes there might not be considered “perfect” in a traditional sense, but they display a keen eye for capturing the mood of a pulsing river. “My purpose here was not just to photograph the fish, it was to photograph the river itself. It was to show the entire environment in its beauty and mystery and rawness.” Often, he becomes so enthralled in his work there that he winds up spending entire trips just making pictures of the waterfalls and rapids from within them.

For him, it all comes back to the genesis of the thought that inspired him. “Sculptors and painters spend days, months, even years creating one piece of art. And I felt that I owed it to my viewers to do the same. To put time, effort, sweat, tears, and personal expression into what I’m providing.”

He does wonder sometimes, whether his vision in the Cauvery images will find appreciation amongst a wider audience, but he puts these doubts to rest with a simple thought: “Not every picture works, and not everyone will like your pictures. But it shouldn’t matter as long as you gave your all to tell them a story.”

Joshua Barton was raised in Chicago, USA and is now based in Bengaluru, India. Besides being an accomplished photographer with a unique vision, he frequently leads underwater photography expeditions. When he’s not working, which is rare, he takes joy in travelling with his wife. 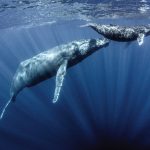 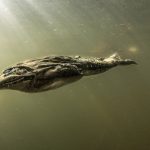 Diving bullfrog, near the Cauvery 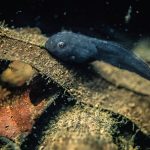 Silent Giant A blue whale off the coast of Sri Lanka. 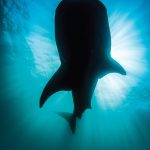 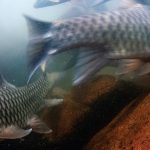 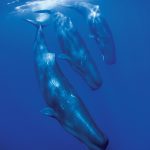 Group of humpback whales, off the coast of Sri Lanka 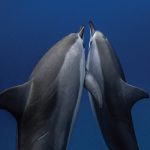 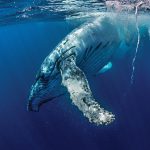