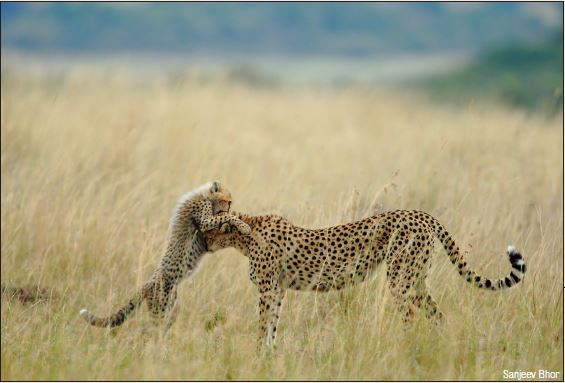 Sanjeev Bhor’s award-winning image, Tender Moments, captures a beautiful moment between a cheetah and her cub.

This story was originally published in February 2013.

Sanjeev Bhor “Patience was the key to be able to sight and photograph such a candid moment.”

In spite of having a regular job, Sanjeev has managed to travel to several national parks each year. His photograph, titled Tender Moments, was shortlisted from amongst 22,000 entries from over 150 countries, and eventually awarded the Viewers Choice Award in the Nature category of the National Geographic Photography Competition 2012.

“I made this image at the Masai Mara National Reserve in Kenya. This picture was taken just after the mother cheetah had hunted for food. While most people put their cameras down, I continued to look for any candid moments. Just then the cheetah’s cub landed up at the spot leading to this personal moment,” he said.
National Geographic sets the standard for photographic excellence around the world.

Speaking about his win, he said “Winning the competition and being published in the magazine and on the website is an unbelievable feeling. It is also a great inspiration to work hard and try to match up to the highest standards in wildlife photography.”