Hiki Komori: Out of the Bell Jar He counts Georges Méliès, French innovator, illusionist and filmmaker extraordinaire, from the late 19th century as one of his strong influences. Méliès used multiple exposures and a variety of techniques to make surreal films that were revolutionary for their time.
Photograph/Hiki Komori

Natasha Desai attempts to discover the mystery behind the elusive photographer on Instagram, simply known as Hiki Komori.

Those who frequent Instagram will know what it is like to come across an account that overflows with uniqueness. The Instagram handle that I stumbled upon, @hiki_komori_, was like stepping into an enchanted world filled with double exposures. Using similar textures and colour tones, the images spoke of loneliness and isolation that struck a chord with me.

Being Hikikomori
I kept saying the name Hiki Komori over and over again in my head, unable to remember where or when I had come across those words. An online search revealed its origin. Hikikomori refers to a group of people in Japan, also known as ‘missing millions’. These individuals live in extreme isolation, unable and unwilling to interact with society. Along with the photos he shoots, he sometimes uses royalty free images that are available under the Creative Commons license to layer on his portraits.
Photograph/Hiki Komori

Articles about the artist revealed nothing more. Intrigued by both the imagery and the person, I got in touch with the artist, knowing neither if it would be a woman, man, teenager nor from which part of the world they would respond from.

“Sometimes you have so much pain in you, that you cannot share joy with anybody. You have to withdraw and be reborn. My rebirth occured through my photographs, and the collaborations with the people I met.” Although he was extremely lonely, he did not cut himself off from his immediate family and old friends.
Photograph/Hiki Komori

With a time and date fixed, I found myself speaking to a quiet 35-year-old French gentleman, who would prefer to be known just as Hiki Komori.

With the sweet joy of happiness, life also brings along eddies of misfortune. Around two years ago, the loss of his full time job, coupled with a broken heart, drove Hiki Komori to leave Marsellies and move to the smaller, quieter town of Clairemont Ferrand in France.

“When I came to know of the hikikomori in Japan, I was able to relate to the subculture completely. I was in a dark and low point in my life, with nothing good happening to me.” A designer by profession, Hiki Komori photographed extensively over the years. And it was to this art he turned to, in an effort to reinvent himself. Hiki Komori’s daughter is very interested in his art and is an active participant of his images. This photograph of herself is her favourite.
Photograph/Hiki Komori

Seeing Double
He experimented with several ways of presenting his double exposures until he decided upon the final look and feel. “Since I used elements like trees and buildings to make images, I wanted something related to me to tie them together. Hence, I used consistency in colour and texture.” All the people featured in his photos are either his friends in real life or people he met over Instagram. He considers his images to be a mix of photography, photo collages and digital art.
Photograph/Hiki Komori

Each image is made on his iPhone, edited using different apps like Mextures, TinType, mExpose, Camera+ and Photoforge 2. “I usually experiment alone in my room, with good music and a glass of good whiskey by my side.” The portraits are either sent to him by his collaborators or made by himself. Most of the time, his family forms his most willing subjects. “My children don’t exactly understand what I do with the pictures, but they love the final results.” His online identity has often been mistook for that of a Japanese woman. As this misunderstanding amused him, he never tried to clarify it.
Photograph/Hiki Komori

The Persistence of Isolation
When asked if the feel of isolation is intentional in his images, he replies, “it is definitely deliberate. A couple once got in touch with me, wanting a double exposure of them together. I had to refuse. The point of the pictures I make is to depict the loneliness that each and every one of us experiences at some point in our life, in varying degrees.” Hiki Komori is always open and looking to make interesting juxtapositions. Anything from another person’s work to music or a line of poetry can form the base thought of his next image.
Photograph/Hiki Komori

The Arrival of Spring
Over time, Hiki Komori found himself coming out of his self-imposed exile. “I felt like I was in the winter of my life, but today I can laugh, go out, talk to people and live again. I could never have imagined that the pictures I made all alone with just a phone, in my room would go so far. The entire experience has been nothing short of amazing for me.”

He now plans to release a book of his best images by next year. “My solitude kept building up and affecting what I was worth, but I have found a way to bring out the best in me from it. I am glad to not be a hikikomori anymore.”

The path that lies in front of Hiki Komori is a much different one than the one he was on two years ago. He will resurface on Instagram, probably with a different shooting technique and on a different media. For now, he is enjoying his new lease on life with his friends, family, and photos, all of whom helped chase the darkness away.

“I believe in this quote more and more everyday. “A man has to find what his worth is, if he wants to find what is best in him.”” 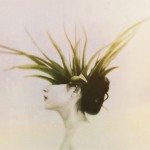 This image formed a part of Hiki Komori’s Plant series, a sort of a signifier of better times in his life. Photograph/Hiki Komori 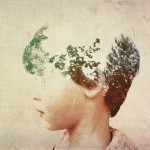 His children were his very first subjects. Along with his father, they remain the most willing and enthusiastic to pose for him. Photograph/Hiki Komori 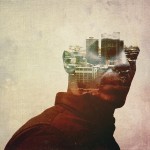 While he does visualise images and create them, most of his creations are spontaneous and based on his mood at the time. Photograph/Hiki Komorui

Tips on Making Better Multiple Exposures with Your Cellphone He works as a website developer and was a designer in the past. His taste in music is eclectic. He could begin his day with rock music, continue with the baroque music of Corelli and end the night with rap music by Tricky. He spends his free time visiting museums, watching movies, reading books and spending time with his children. You can find him on Facebook, Instagram and Tumblr.