These handprints were stamped next to the doorway outside a house. It seemed the people in the house had stamped their cultural identity. Photograph/Sanjay Nanda Architectural minimalism is an unusual take on photography. Supriya Joshi speaks to photographer Sanjay Nanda about his colourful and unique visions.

The first thing one notices about Sanjay Nanda’s work, and something that intrigued me the most, how he effectively captured microcosms within a larger picture. While most photographers focus on presenting a subject as a whole, Sanjay prefers to go closer and bring out the minute details. It is this exploration of the everyday subjects in a unique manner that makes him stand out from the rest.

Graphical Beginnings
Born in Cochin and brought up in Mumbai, Vishakhapatnam and Delhi, Sanjay took to graphic designing after graduating from college. However, he had always been inclined towards photography. “Earlier, I did not understand the technical aspects of photography; terms like depth-of-fi eld meant nothing to me,” he said. But in 2007, this changed. “Some friends of mine were looking for a space to conduct photography workshops, and I offered them some. I even enrolled myself in these workshops. That was where photography as a hobby quickly attained a level of seriousness.”

Creative Communication
“Photography is the perfect medium for me to express my creativity and thereby communicate what I feel and see,” he opines. But does the fact that he is a visual designer have an impact on his photography style? “As a graphic designer, I have an understanding of composition and various elements of visual design like lines, forms, shapes and textures. This background gives me a good idea on how to frame my photographs.” This understanding is clearly refl ected in his photographs. Architecture captured in crazy, geometrical patterns, a whole lot of textures, an interplay of light and darkness, all fi gure very prominently in his photographs. “My work is an attempt to explore and create moments from the often ignored, yet unique remains of the concrete jungle in order to reconstruct an urban aesthetic,” he says.

Beauty in Colours
Another very prominent feature of Sanjay’s work is that his images are fi lled with colours. Riveting blues, bright greens and lovely neon colours all find a place in his photographs and add a certain drama to the frame as a whole. “There is a lot of colour in India, and it is very difficult not to notice it. Since I compose my photographs in a minimalistic fashion, only the very colourful part of the environment is captured,” he explains.

Aesthetics of Art
After all is said and done, Sanjay does not consider himself to be a documentary photographer. “I do play around with the saturation and colour of my photographs, as I believe in classifying my works under art photography. Under this genre, it is acceptable to manipulate an image to create an aesthetic piece of work.”

This belief, perhaps, is also due to his training in photography. “I learned photography the other way round, first learning the art bit and then focusing on the science. The technical aspect is easy and can be learnt in a very short amount of time. It is the aesthetics that are not taught by anyone. Since I was aware of compositions before I began practising photography, I just had to compose the frame in accordance.”

Architectural Minimalism Sanjay also has a keen eye for architecture and framing subjects in a very interesting minimalist sense. I wanted to know more about how he combines minimalism and architecture to form such striking imagery. “Since architectural design has a lot of areas in common with visual design, I can relate to the subject I am photographing. I interpret things by removing all the descriptive clutter to convey meaning to others,” he elaborates. He goes on to explain that “All architectural elements are a piece of design in itself. And these pieces have been beautifully embedded into the whole rural and urban landscape. I just abstract the individual elements to bring out the beauty in the design and sometimes the social and cultural meaning it wants to convey.”

A Clear Vision
When Sanjay photographs his subjects, he does so with absolute emotional clarity. “I shoot in an un-emotive manner, so I do not get overwhelmed by any subject. I just see the subjects as elements in a composition—colours, shapes, spaces, etc. The emotion should be expressed by the viewer when they see an image shot by me.”

To see more of Sanjay’s work, log on to indipixgallery.photoshelter.com. 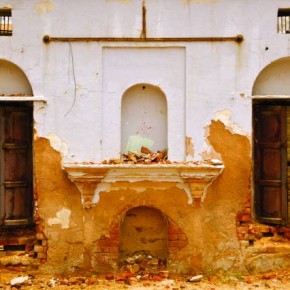 I found that a portion of this house was not broken down. I composed the frame symmetrically and juxtaposed the chaos around it. Photograph/Sanjay Nanda 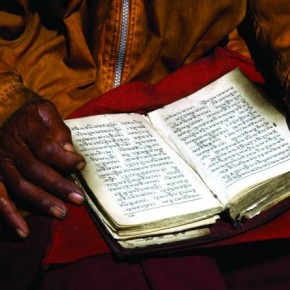 I shot this image of a monk reading his prayer book in Spiti in Himachal Pradesh. I liked the brightness of the prayer book against the darkness of his clothes. Photograph/Sanjay Nanda 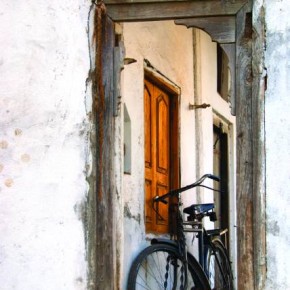 I am always on the lookout for doors and windows. What attracted me to this was that this door looked like a window and the cycle parked inside added to the image. Photograph/Sanjay Nanda 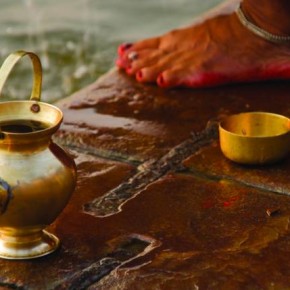 I zoomed into the utensils used for rituals. At the same time, I showed a part of the person performing the ritual to establish a human connect. Photograph/Sanjay Nanda 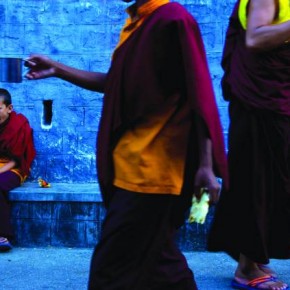 Serendipity made this shot happen while I was observing a few young lamas having breakfast just after their early morning prayer. Photograph/Sanjay Nanda 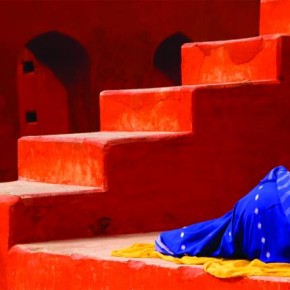 Out of the few shots I took at Jantar Mantar, this shot is special. The partially hidden resting fi gure seems congruent with the dynamism of the upward moving stairs. Photograph/Sanajy Nanda