Titled Moonrise, this is one of David’s most challenging images, both to shoot and print. The illumination in the foreground is provided by a twilight sky even as the moon rises on the opposite side. Photograph/David Fokos

Beyond aesthetics, the photographs of David Fokos evoke a variety of emotions the more one looks at them. Rahul Sharma gets an insight into the ideologies and thoughts that go into his process. David Fokos
55-year-old David is a black and white minimalist photographer based in San Diego, California.
His work has been widely exhibited in galleries across the USA and worldwide.
Fokos is also an Emmy-award winning director for the series Art Pulse which he hosted, directed and co-produced with his wife, Barbarella Fokos.

With his black and white prints currently represented in over 14 galleries across three continents, each of David Fokos’ images have a different story to tell. Little do the viewers know that each print has been personally handcrafted for over 100 hours within a darkroom.

Fokos attributes his meticulous nature and technical understanding in aesthetics to a major in engineering combined with a minor in art history.

The Beauty of Haiku
When he was studying, Haiku poetry was a form of art that deeply resonated within him because of the moods they brought out. He recalls a poem by a 17th century poet, Mizuta Masahide, called Barn’s burnt down. It would later go on to inspire the image titled Moonrise. It reads as follows:

since my house burned down

I now own a better view

of the rising moon

Over the years, David has adapted various thoughts that constitute traditional Japanese concepts such as seijaku (tranquility), sabi (an appreciation of the ephemeral nature of things), yugen (unobvious, subtle, profound gaze) and shizen (natural and without any kind of pretense).

Childhood Escapades
When David was 11, his grandfather gave him a Kodak Brownie camera. He instantly began showing an affinity for landscapes by making images of cobblestone streets, looming church spires and building façades. Not long after that, he began using his father’s Spotmatic camera. “After taking high school classes, I learned how to develop film and make prints. I sold my first photograph—a red barn in a snowstorm, for USD 50 (approx. Rs.3500),” he reminisces. He also purchased a 5 x 7 Korona View after looking at classified ads. He had never handled a view camera before, but was ready for the challenge. This 10-second exposure was one of Fokos’ last minute decisions. He made this photograph at midnight, watching a 100-car freight train zoom past on the track at the left. Photograph/David Fokos

Eternal Connection with Martha’s Vineyard
With his view camera, he began working in isolation on Martha’s Vineyard Island, in Massachusetts, USA, making images that expressed what he felt. In this idyllic environment and with barely any people on the island, David immersed himself in training his eye to see, for the next 15 years.

After photographing the same locales, he went to an art and photography festival, Fotofest, in Houston, USA, with 11 prints that measured 13 x 13 inches each. His dedication bore fruit as the reviewers favorably received his images. Some of them expressed keen interest in representing his work in their galleries. Within a few years, he was selling enough prints through gallery sales to make a decent living. 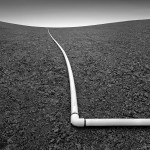 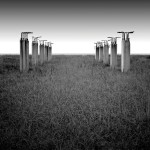 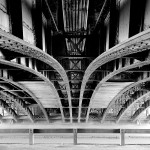 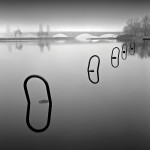 Evoking Emotions
Today, when he showcases his work in exhibitions, David conducts discussions with the audience. “I like to show 10 images without any commentary and ask the viewers to suggest some words that come into their mind when they view them. The responses usually include words like ‘peace’, ‘tranquility’, ‘stillness’ and ‘serenity.’ Never have they said ‘ocean’, ‘beach’, ‘rings’, ‘rocks’ or ‘poles.’ That’s when I know that I have been able to successfully communicate specific emotions with my photographs. My purpose as an artist is achieved.”

“Ansel Adams greatly inspired me. The nature and quality of his prints, the infinite depth of field, high resolution and full tonal range have left a mark upon me.”

Minimising the Frame
“Sometimes, places that exist all around us come across as small vignettes to one’s eye. It is like having a bonsai tree on the balcony of a Tokyo apartment. You can just focus on that one element and tune everything out.” Fokos believes in escaping into his own world of image-making by incorporating only the things he wants the viewer to focus on, in his frame. This way, he redirects their experiences by reducing his photographs to austere compositions. It took Fokos three years to make this image—he had to ensure that the tide was at the right level so that it would completely submerge the jetty and the ethereal morning light could play its way in. He consulted tide chars, astronomical tables listing the times of sunrise and sunset and weather reports. Photograph/David Fokos

World as a Continuum
Fokos believes that our world is not just an artificial, frozen slice of time. “Our bodies respond to the world in a cumulative way, averaging our experience as we pass through time.” He further uses an analogy of a person you meet for the first time. “Your impression of the person will just be a snapshot of your first encounter with him or her. It would be a portrait which you have assembled from various singular moments that you have spent with that person.” He incorporates this thought when he makes images. That is why he often uses his camera’s ability to make long exposures that capture a longer timeframe. This particular dock in Martha’s Vineyard has been wiped out by storms several times. It has been rebuilt more than once. The black vertical slats of the fence with the white horizontal ones of the dock originally piqued David’s interest. Photograph/David Fokos

“For hundreds of years, artists have struggled with the problem of encoding the element of time within a static image. Examples of this include 17th Century Chinese scrolls, the cubist works of Marcel Duchamp and Charles Demuth and the earthworks of Robert Smithson. In recent times, artists such as Hiroshi Sugimoto and David Hockney have explored this subject using a mordernistic approach.” As one drives along the coast from Edgartown to Oak Bluffs on Martha’s Vineyard Island, one can see canals of this type forming naturally. Photograph/David Fokos

Fokos wishes that he can positively influence people through his images and prominently change the way someone sees the world. On his wishlist is to shoot an island in Japan like Noashima and conducting exhibitions in both the US and Japan after he completes the project. He believes that this would make an interesting cross-cultural project.

David Fokos writes in the About section of his website, “It is my hope that, in looking at my work, you may share with me the experience of these places.” His ability to translate emotions into a frame and share his own feelings comes from his deeprooted knowledge and dedication about his subjects. His ideas take minimalistic photography to new heights.

This article originally appeared in the September 2015 issue of Better Photography.