The golden light from the setting sun and the Wildebeest kicking up dust on the dry lands of Amboseli, Kenya make this one of Harish’s personal favourites. Photograph/ Harish N N

Harish N N converses with Supriya Joshi, on making arguments in a court of law and photographing the wild.

When life gives you two choices, it becomes a challenge to pick one and stick to it in the long run. But then, there are those who decide not to choose, and balance both choices in perfect harmony. One of these individuals is Harish N N, an avid photographer, who also happens to be a practising advocate.

Whether he is donning his black robes or holding a camera, Harish is a very interesting personality. He is one of those who would rather have an intellectually stimulating discussion than sit around while life drags on. It is also a huge possibility that these discussions take place on a safari, as that is where he likes to be, in the midst of nature.

When it concerns nature and wildlife photography, Harish has been passionate about the subject for a very long time now. The interest levels are surely fuelled by everyone around him, considering that his entire family is interested in wildlife photography. In fact, when he makes a trip to the forest, he considers it to be more of a family get together, rather than just a photo excursion. “Balancing my profession with my passion and family life is quite a challenge. Fortunately, since we are a closely knit family that loves wildlife, we travel as a group on safaris,” he says.

Being One with Nature
Whenever we come across anyone who lives two diverse identities, one cannot help wondering how the two paths merged.  I asked Harish, the advocate, about his first tryst with the camera. With a law background, how did he get interested in photography? It all goes back to his early days, when his father took him on a number of  treks.“The whole feel of  being around nature and the wild is addictive. As I started attending more treks, I started thinking about capturing what I saw, on the camera. This was during my college days. I started borrowing my friend’s SLR camera and photographing nature around me.”

As he began discovering this new hobby of  sorts, he found that his brother’s friends were avid wildlife photographers, and their interest spurred him further. He began to practise photography persistently, and in 2007, he started considering it to be a lot more than just a hobby.

The Kenyan Experience
Experience and passion are great teachers, as Harish discovered in a safari trip to Kenya. “In October 2007, my cousins and I planned a trip to Kenya to experience the wildlife safari there. Seeing my growing interest in photography, my brother insisted that I buy a DSLR of my own. I was not completely well versed with the technicalities of the medium, but I just decided to follow my instincts and embarked on this journey. The trip to Kenya sparked a new interest in me, and I took up wildlife photography as a serious pursuit, which has now turned into a passion.”

A Love for Birds
Harish’s photographs show a deep, sincere love for animals, and a strong virtue of capturing great moments in the wild. It is interesting that a majority of his portfolio comprises of bird photographs. When I mentioned this, Harish became enthusiastic immediately.“The abundance in their variety, colour,shapes and sizes make photographing birds a pleasure. When I look through the lens, it helps me connect with the birds,while I try to understand their behavioural patterns. The sheer unpredictability of their behaviour provides me with good photographic opportunities.”

Perhaps the most difficult aspect of bird photography is approachability. Most birds keep their distance from humans, and fly away the moment a camera is aimed at them. Harish gives a piece of advice,“patience is the key to mastering bird photography. Most importantly, we must approach the subject in a manner that is least threatening to them. Let the bird relax and be at ease. A stressed bird does not make a good image.” As we browse through some more of his images, he sums up his thoughts, “birds are swift, restless and full of action. This is what makes bird photography a challenging task and this is why I am drawn towards it.”

Big Winnings
It is obvious that Harish N N relishes challenges—a characteristic that was best reflected, when he won the prestigious title of the Nikon-Better Photography Photographer of the Year 2009. That was the day when he realised that his choice of pursuing photography was the right one.“ I had won the Wildlife category and along with the other category winners, was taken to Singapore for the Final Face Off.”

He pauses to think and says, “I must admit that the Final Face Off was, by far, the most difficult moment of my photographic career. All my life, I had made pictures of nature and the wild, and here, all of a sudden, I was expected to step out on to the streets and make pictures of the life in Singapore.”

That is probably the way in which the best of creative artists find their mettle and shine—by being pulled out of the irregular comfort zone. Instead of letting his initial hesitation bog him down, Harish decided to take up the challenge. When he won the final title, he realised that good photography goes beyond all categories, genres and subject matter. “Since I was appreciated for something that is not my greatest strength, the recognition and acclaim that I received was a great boost to my confidence.”

Challenges of Nature
As a wildlife photographer, it is only obvious that one has to endure some extreme external conditions. Harish has been through extreme temperatures to capture his shots, but he considers this to be a small part of experiencing nature in all its glory.

In Kenya and Assam, he has made pictures in some very low temperatures, and the chill would bite into his fingers. “You have to endure these conditions. It is important to train your mind to ignore all external difficulties and focus on the job at hand. Of course, prior knowledge of the weather conditions and terrain will help you prepare with the right kind of clothing or any other accessories that you may require.”

Beyond Equipment
Harish strongly believes that one does not need very expensive equipment to start photographing wildlife. “Equipment is not important, what matters is your love for nature. In fact, begin with a wide-to normal lens and learn the discipline of getting close to the animal without scaring or provoking them.”

An Insight Into Life
While talking about his work, Harish raises an interesting comparison and says something that seems oddly inspiring.“Wildlife photography gives us an opportunity to explore animal behaviour. It helps us understand the secrets behind the natural order of life. When we get an insight into why animals behave the way they do, we automatically tune ourselves to understand humans better. This, in turn, helps us lead our own lives in a better way.”

This lawyer’s future plans are as unpredictable as life in the wild. “I do not really have a fixed agenda or project that is there in the pipeline. But, of course,there are so many things on my wishlist! For instance, I really want to explore and make photographs of the wide range of exotic wildlife of the Himalayan region. A trip to the Ladakh region would perhaps provide me with an opportunity to not only photograph rare species like the Golden Eagle in all its splendour,” he says. With this, he sends us a final set of photographs, and signs off, as it is time to go to court. In wildlife photography, there are often some blink-and-you-miss-it chances that test your patience. Harish recounts, “We had missed capturing a tiger’s hunt, and we decided to try our luck again and headed to the Rajbehra dam area in the Bandhavgarh National Park.” He goes on, “We spotted a tigress very close to the safari path, and it wasobvious she had her eyes set on a herd of deer. The challenge was not knowing when the tigress would attack, and which direction the chase would lead,” he says. They waited for over three hours, and the sun began to set. “Finally, the tigress decided to charge and she hunted down a large male stag. The entire action lasted for just ten seconds, and I was able to capture this majestic animal in action,” he said.

About Harish N N
An advocate by profession, Harish loves music. He enjoys playing the keyboard and guitar as well a spursuing photography. According to his wife, photography, besides being Harish’s second profession, is also his second wife. He believes that photography is a good medium to spread awareness and work towards conservation.

This article originally appeared in the September 2011 issue of Better Photography. 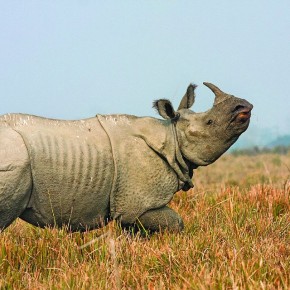 When he photographed this Indian One-horned Rhinoceros, it was agitated by the presence of humans, and charged towards their vehicle. Photograph/ Harish N N 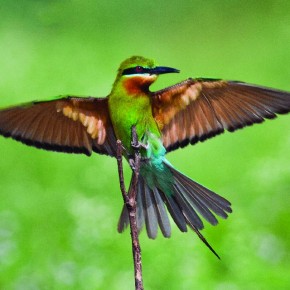 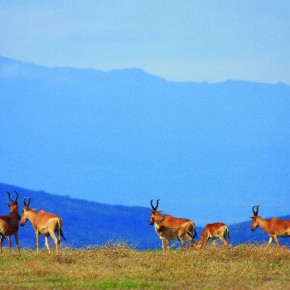 Harish prefers photos that educate the viewer about the animal’s relation to its habitat, just like this picture of a herd of Hartebeest. Photograph/Harish N N 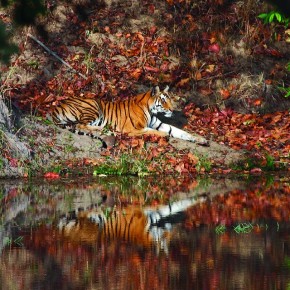 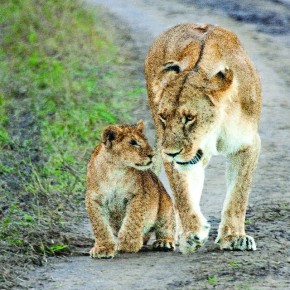 According to him, interaction between animals leads to the most touching and memorable of moments. Photograph/ Harish N N 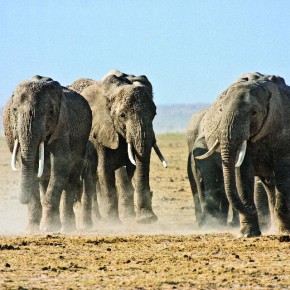 He recounts witnessing this herd of African elephants as they kicked up dust in a race towards a nearby watering hole. Photograph/ Harish N N 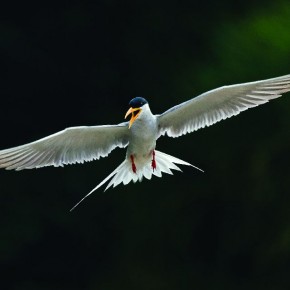 Harish’s love for birds is apparent in his portfolio, which includes this perfectly timed backlit photograph of a River Tern. Photograph/ Harish N N