In Dreams: Cindy’s work is spontaneous and technique oriented. She gently spun her phone camera to create this sublime effect. Photograph/Cindy Buske Cindy Buske welcomes Sakshi Parikh into her world of vivid fantasies, woven together by the ethereal photographs of her daughter Anya.

In 2015, Cindy was declared as one winner of the iPhone Photography Awards in the Still Life category. Her work also has been featured on www.lensculture.com. Cindy seeks her inspiration from books, music, French gothic art and various forms of pop culture. She is currently working on her new photo series, Halloween in Wonderland, which is her version of Alice in Wonderland along with her love for Halloween.

Fairytales were always a pivotal part of everybody’s childhood. Whether it was battling evil witches, a trip to Neverland, weeding out poisonous apples, fighting the big bad wolf or scenarios involving princesses and castles, we were connected to this surreal fantasy world that was far away from reality.

As we all entered our teens, these fairytales faded away to the recesses of our minds, but Cindy Buske relives these stories often with her daughter, one picture at a time. Anya as Muse
Cindy loves photographing her three children. However, since both her sons are camera shy, she found a muse in her youngest child, Anya. Their photography journey started several years ago with simple portraits, and gradually shifted towards elaborate sets, props and costumes. “My relationship with my daughter revolves around exploring our creativity and making different kinds of art. As a child, Anya posed for me and always loved being in front of the camera. We have been collaborating ever since.” says Cindy. Anya’s best friend, Aymber is also a major part of these artistic collaborations. From the series Sadie’s Closet: In order to make these images a lillte more dramatic, Cindy used a black backdrop and soft light while shooting. She also used a fan to add motion to the lifeless dresses. Photograph/Cindy Buske

The Transition to Conceptual Art
Initially, Cindy used to photograph everything around her. It was her profession as a nurse and childbirth educator that shaped her interest in photography and she started making portraits of expecting mothers and their families. Five years ago, she adopted the iPhone as her camera of choice and never looked back.

“I gave up shooting with my DSLR and stopped taking up professional assignments, as I realised that I didn’t like photographing for money. I was more inclined to creating my own art, and my phone allows me to do that without any constraints”, she says. After the birth of Anya, this art form took a turn towards conceptual imagery. A younger reflection of Cindy, Anya inspires her to create alternate realities through her pictures. Swan Song: Her photographs are often metaphors of the things she sees. For instance, this image was created to depict a pair of swans swimming around a lake. Photograph/Cindy Buske

Turning Dreams into Images
Considering the stress that comes along in the world of medicine, making images helps Cindy strike balance in her life. The ideas for shoots are mostly inspired by classic literature, children’s books and Tim Burton movies. She uses lace, veils, makeup, flowers and gothic Victorian dresses extensively in her imagery. “I love buying costumes from thrift stores. Apart from being inexpensive, the clothes always have a story behind them”, says Cindy. Over several intensive brainstorming sessions, Anya helps her with the art direction such that they create sets as required. Abandoned hospitals and cemeteries such as the Père Lachaise Cemetery in Paris form the backdrops of Cindy’s haunting, almost melancholic images. She swears by Hipstamatic for its film simulations to make her images look dated and mysterious. Meliae: Cindy and Anya love sharing their daydreams with each other. For them, making pictures is an escape to a fantasy world. Photograph/Cindy Buske

While shooting with my daughter and her friend, our collaboration feels as if I am recreating their childhood memories.

Spinning the Yarn of Storytelling
She believes that her photographic approach is a mix of emotion and intuition. For instance, Sadie’s Closet is a series where she has taken fascinating photos of her daughter’s clothes by carefully hanging them on a string and placing them in front of a black background. The facelessness of the images gives the whole set a dark and eerie twist. “Sadie is a fictitious character that I based on my daughter. I began photographing Anya’s vintage clothes while she was away for studies for the better part of a year. Her absence and my longing for her motivated me to create this series,” explains Cindy. “Along with Aymber, Anya and I often improvise our concepts when on set. I feel like a painter when I am shooting with them because they are like canvases that I can project my vision onto. Our method of working is playful and this helps me create something mesmerising,” she says.

For me, Cindy’s dreamy images bring together a world of secrecy and obscurity. Just like characters from the movies Corpse Bride and Sleepy Hollow, they are not dark in an unsettling or scary way, but in a way that you, the viewer can identify with. She entices us to enter an unearthly world by combining the unreal with the real. With glimpses of floating dresses, fallen apples, twirling ballerinas and surreal montages, her images have a sense of graceful movement that feel like a rush of fleeting memories. 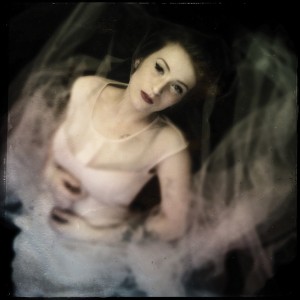 Flurry: Her images allow the viewer to come up with their own interpretations. Photograph/Cindy Buske 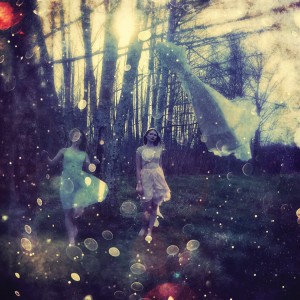 Aikea-Guinea: The inspiration for this image was Aikea-Guinea, a song by the Scottish rock band Cocteau Twins, which talks about love and longing. Photograph/Cindy Buske