Conchita Fernandes discovers a lot in the little that is known about Bruce Wrighton, in the several portraits he made of a small town in America.

There’s a certain candor and charm that inhabits simplicity, making it a trait sought after by many. But simplicity does not come easy to all. It chooses when and for whom to unravel in front of. For those who see it, it is because they have surrendered their preconceived notions to accept a scene or visual in its true, simple form… Someone like Bruce Wrighton, who found simplicity in the different spaces of his hometown in Binghamton, New York.

Bruce was amongst the small handful of photographers of his time who documented the unremarkableness that made up the everyday. But where he differed from his contemporaries was in the tool—a large format camera—the only camera he ever used to photograph his exceptionally ordinary subjects the came from still life, architecture, urban landscapes and portraits. What possessed him to document such a diverse palette of subjects originated from his deep-rooted interest in revealing those that lived an invisible existence in society.

Bruce used portraiture to exhume his subjects. The people he encountered on the streets, bylanes and corners of Binghamton were considered nobodies, at best, average persons, of whom he made simple, upfront photographs. They included carnival workers, security guards and parking lot attendants, who became a part of his Street Portraits series. When asked about the nature and purpose of these pictures, Bruce mentioned, “I don’t have to categorise these people as those existing on the edge or on the fringe of society, but I want to give the sense that they are somehow alienated from the mainstream, either by their own view of themselves or by society’s view of them.” The result was a slew of uplifting and dignified portraits, which in a way reinstated these individuals as members of society. Their demeanour also tells of their willingness to surrender to Bruce’s camera, a kind of trust that is seldom seen today.

Bruce’s aesthetic sense also dictated his choice of subject. He spoke of this in an interview, while recalling his encounter with a parking lot attendant. “He had the right look in his eyes. I didn’t even introduce myself. I said, “Can I take your picture?’ And either because I was so forceful, or he was so open, or there was something in my sincerity, he just said, “Sure.” He was a fairly young kid. Weeping eyes. Eyes that really spoke of the pain of having to struggle versus really wanting to find a home.”

Such conversations were made possible because of his 8” x 10” camera that took several minutes to set up. And while he did this, he would engage his subjects in a friendly conversation that often led him to discover aspects of them, which he would incorporate in their portraits, minutes later. Moreover, Bruce seemed to enjoy… almost look forward to the slowness of the device. It gave him a chance to observe the scene a second or third time, and hope for it to reveal more. “It is a substantially different way of operating,” he said. “It is a far more meditative way… a far more cumbersome way… a far more technically oriented way. It almost became a ritual to take a picture.”

Still life was another area that intrigued him. Just like the people in his portraits, they too belonged to the underbelly, and comprised of objects that were forgotten, or were so commonplace that they never received a second glance. He found them in the interiors and basements of homes and public buildings, bars and taverns, and on street corners.

Where his portraits offered viewers the chance and comfort of looking into the subject’s eyes, the lifeless and sedentary objects that made up his still life pictures have a way of filling you with a certain concern and interest in unraveling its history. Delving a little deeper into what he saw in these objects when he photographed them… Bruce spoke of the power that the image or scene radiates when it is first viewed. There is nothing to define it and neither is it exceptional in its contents. Yet, it triggers the eye. Why? Because of its sheer simplicity… It’s just there, sitting quietly, free from any complexities. Only a handful have successfully tapped into its power, which has a way of luring people back to it, again, and again, and again. “The same reason why we repeatedly look at the Mona Lisa or the setting sun,” Bruce mentions. Eugène Atget and Walker Evans immediately come to mind here, for their extensive documentation of the simple and the ordinary that existed in the everyday. Evans, particularly, made several pictures of various odds and ends that resided in the interiors of people’s homes. And while their styles are completely different, there is no denying how persistent the two were (Evans and Wrighton) in meticulously photographing inconsequential items. Another thread common to both their work was their use of text in photographs. Restaurant signs, or the ones on storefronts, or for that matter, logos and words on boxes or calendars, featured prominently in Bruce’s photographs.

Undeniably, Bruce had a piercing eye for composition and a kind of thoughtfulness that elevated his colour palette. This in turn brought out a part of him that was committed to building and preserving the relationship between the observer and the subject. His choice of colours and how he let them play against one another in the most casual and inconsequential settings, added a certain placidity and warmth to his photographs, which if not done right could have felt uncomfortably still. His patience and attention to detail too, and his ability to empathise and see beyond the façade occupying the demeanours of people and objects alike, allowed Bruce to create a rare and intimate portrait of a small town in America… a need for which feels quite important in today’s scenario.

Bruce Wrighton decided to pursue photography as his sole career, when the realisation dawned upon him that “waiting tables was not going to be emotionally sustaining.” Before his untimely death in 1988, he spent 10 years of his life photographing a small slice of America which was, at the time, engulfed in economic turmoil. 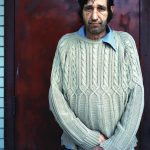 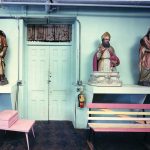 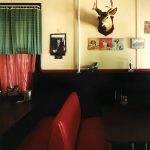 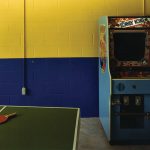 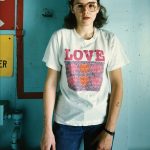 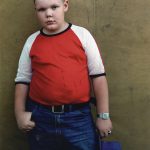 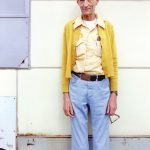 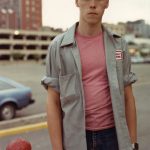