A Bouquet of Bodies She sometimes uses techniques like acrylic coating to give the print a different look. Photograph/ Cecelia Webber

Her images reflect an intricacy that is spellbinding. Cecelia Webber tells Conchita Fernandes about creating fairytale figures with the human body. “Through my work, I try to expose the vulnerabilities of the body.”Cecelia Webber

When I first came across Cecelia’s stunning photographs, I assumedthat I was looking at a three-dimensional painting. A strikingly bright and colourful image of a butterfly immediately popped out against the black background. I wanted to see more.

After viewing some of her otherimages, I realised that the tiny dots and the elongated antennae of the butterfly were actually different parts of the human body! What looked like a butterfly was, in fact, multiple shots of a person’s back.

Going through each of  Cecelia’s images one by one, I was astounded by their intricacy and perfection. While ways of seeing and innovations in photography can be refreshing, her images stand out because of the forms she captures, and the extreme precision with which she pieces together each of her creations.The thought, effort and time behind everyone of her images are clearly visible. A Pursuit to Find Herself
Cecelia was always interested in the arts. Having liberal parents helped develop her creativity. She mentions being different from her peers while growing up—she had difficulty finding classmates who were easy to talk to. “The only conversations I enjoyed were the ones with my professors.” Her interest in photography went through a gradual transition during her school and college years—from a love for black and white, to work that is more in tune with what she shoots today. She says that her style was largely shaped by the influences in these formative years, especially that of her father.

“ Magazine covers are made to look flawless and perfect, but that is not healthy.”

Of Fairies and Insights
“When I was really young, my dad used to read me The Lord of the Rings. I was really young, so I had to keep asking him the names of different characters to remember them. I was always convinced that there was this other world that existed somewhere.” With her adventurous spirit as her only real friend, she explored the woods near her home in search of flowers, bugs and fairies. This helped strengthen her perception of the natural world.
Her grandmother, who was an artist herself, allowed Cecelia to use her art materials to experiment. All of this eventually transformed into the kind of imagery her photographs possess. While most photographers and artists have role models to draw inspiration from, Cecelia begs to differ. For her, the emotional quotient of an idea is most important. All things beautiful inspire her. “The journey of life is inspiration enough,” she says. 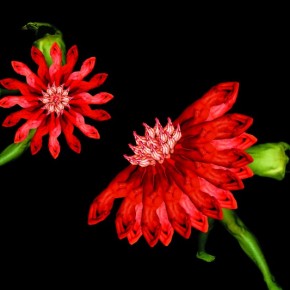 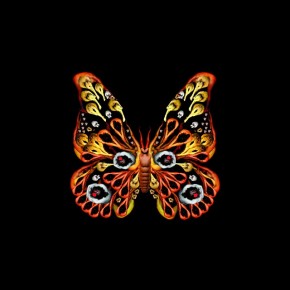 She considers some of her work to be self portraits, though she only appears as tiny dots on the wing. Photograph/ Cecelia Webber 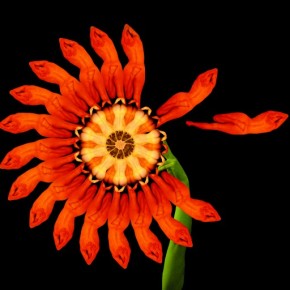 She speaks of the importance of the pose with respect to what one wishes to convey. Photograph/ Cecelia Webber

Desterilising the Human Body
Cecelia has always been curious about the stigmas associated with the human body by different cultures and societies. She laments the fact that almost every image today is air brushed and manipulated to look a certain way.

“Magazine covers are made to look flawless and perfect. I strongly feel that airbrushing is not required all the time. Natural features can look good too,” she opines. According to her, the elimination of flaws gives people an unhealthy view of their bodies. “Through my work, I am trying to desterilise the human body and expose its vulnerabilities.”

Looking at the intricacy of her images, one may wonder about the thought process behind each one of them. She says that she often spots a flower or a natural pattern while taking a walk. Taking that as the base of her image, she stands infront of the mirror and tries to replicate its shape. This has strengthened her ability to conceptualise before the shoot begins.

“ When my dad would read me the book The Lord of the Rings. I became convinced that there was this other fantasy world up there.”

Manipulation and Truth
While working on an image, she makes a conscious effort to maintain the true form of the human body. She says that she often faces the challenge of body types being different. “I find it much easier to pose on my own as I am aware of my flexibility and limits,” she states.“A lot of people believe that digitally manipulated images cannot be classified as art. I don’t agree with that. I think one needs to be true to the medium. And to oneself, of course,” she adds. In her attempt to take her fantastic creations to the next level, she intends to experiment with people from different races, ethnicities and backgrounds. She says she would love to involve older models as well, and men.

Once the Skype conversation with Cecelia came to an end, I decided to take one more look at her photographs. Even after knowing the process behind her stunning imagery and understanding her perspectives, I still remain mesmerised by their brilliance. After all, seeing her photographs is an experience in itself. In some photos, I found myself counting the number of bodies until I realised that there were far too many. I guess that is what the world of Cecelia Webber does to you. She says that besides light, she experiments with focus too on some occasions, to add a sense of visual depth. Photograph/ Cecelia Webber About Cecelia Webber
Cecelia strongly believes that life is all about being happy, whatever one may choose to do. Being the adventurous person that she is, she once climbed naked onto the rooftop of her house during a rainstorm! She graduated with a degree in neuroscience and says she would love to teach philosophy.