Anand Shinde: The Man who Speaks in Rumbles

The relationship between an elephant and its mahout is a sacred bond. domesticated elephants trust their mahouts completely, and treat them as family. When Anand began communicating with elephants, the mahouts would consider him crazy. “They would laugh at me many times, but after they saw my fi ndings, their outlook towards their ward changed a whole lot.” Photograph/Anand Shinde

In conversation with Anand Shinde, Supriya Joshi discovers that words do not need to be said to be understood, and that emotions are a universal language.

The usually quiet coffee shop in my office building is buzzing with sounds, and not the kind that is made by humans. Anand Shinde has set up his laptop on a table, and he is showing me a video of Krishna, an elephant calf, coming out of his enclosure for the first time. “Do you see how happy he is?” he asks me, “The way he is expressing his joy is no different from how a human child would,” he says, as the little one sways his head back and forth in merriment. Spending close to three hours in that coffee shop, Anand told me more about elephants than what I knew from all my years of watching them on Animal Planet. His is a story that transcends the barriers of language and goes to prove that if you choose to listen, the world speaks. 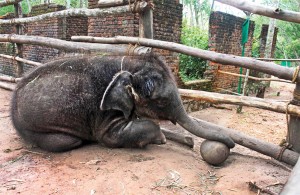 Baby elephants require a lot of love and affection. Anand taught many calfs to play football, so that they would keep themselves occupied. Photograph/Anand Shinde 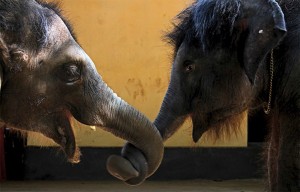 An elephant cannot thrive in isolation, and requires the company of other elephants to keep them going. Here, Ganga (right), holds on to Krishna’s trunk as a sign of friendship. Photograph/Anand Shinde

When One Thing Becomes Another
With a background in photojournalism, Anand was on assignment in Kerala, where he decided to photograph the ancient martial arts form, Kalaripayattu. “I sent the photographs to Bandeep Singh, but he wasn’t impressed,” he says, ““You’re in Kerala,” he told me, “Show me some elephants!” So I thought of photographing Thrissur Pooram, a festival that is held in Vadakkunnathan Temple in Thrissur every year. During the festival, elephants are decorated and put on display amongst a huge crowd of people. I saw how the mahouts would beat the elephants to perform a certain trick, and I was surprised that they would not retaliate. Despite their mistreatment, the elephants absolutely loved their mahouts. This, in turn, got me thinking about how Asian elephants are represented in the world,” he says. “If you do a Google search for Asian elephants, all you will find are photos and videos of angry elephants going on a rampage. In comparison, African elephants are always represented as tranquil and peaceful. I decided I needed to change this perception.” 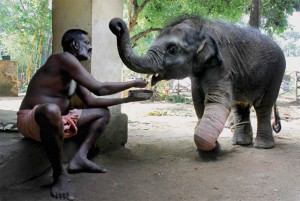 Anand had a deeprooted connection with Krishna, who had fractured his foot. Sadly, Krishna could not survive the injury, leaving Anand dumbfounded for days. Photograph/Anand Shinde 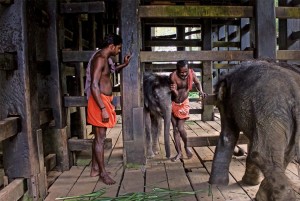 Whenever Anand visited them, the baby elephants would rush to greet him, even if it meant shoving their mahout aside! Photograph/Anand Shinde

A Meeting that Changed it All
His colleague in Kottoor introduced him to the then-Chief Wildlife Warden, V Gopinathan. “I expressed my concerns about the way Asian elephants are represented, and I wanted to do my bit to show the world the true picture of these fascinating animals,” he says. The Chief Wildlife Warden agreed, which became the exact turning point in Anand’s career and launched his journey into understanding the mystical world of elephants. But first, he had to familiarise himself with the noble beasts.

“Elephants are just as capable of showing emotions as we are. They laugh, they cry, they throw tantrums. If we choose to truly see and hear, the emotions become palpable, which is when you begin relating to them on a higher plane.” Photograph/Anand Shinde

A Language of their Own
“At first, I knew nothing about the elephants. So, for the first five months, all I did was visit the elephant centers in Kerala and just spend my time observing them,” he says. More than picking up the camera, he would spend hours listening to them communicate. “I could see a pattern emerging. I didn’t really understand what they were trying to say, but I would try and mimic their calls as my reply to them.”

“A forest is healthy if there are elephants in it. They support so many life forms, and without them, life simply cannot sustain itself. Every 15 minutes, an elephant dies. We need to do all we can to protect them, for if this continues, there will be no more elephants by 2025.”

A Relationship of Trust
Over time, Anand realised that the elephants were reacting to him in a very different way than how they would to their mahouts. Anand shows me videos of him interacting with the elephants, and it is quite remarkable to see him talking to them, and even encouraging them. “It took me a very long time to decipher the various calls made by an elephant, and I still feel like there’s a lot more to learn about them,” he says.

Elephants love their daily baths in the river, but often, their mahouts would prod them to finish faster. “Such behaviour can cause a strain in the elephant-human relationship, and can cause the elephant to loose its cool.” Photograph/Anand Shinde

Creating an Impact
There is a strong sense of empathy, sensitivity and companionship that one can sense, while going through Anand’s photographs, and, in many ways, has brought the true nature of elephant behaviour to the world. Moreover, these photographs have very successfully acted as documentation for Anand to show the forest officials about the needs and requirements of the animal. “The forest officers were amazed to see my findings. The mahouts were initially hesitant in modifying their behaviour to deal with the elephants, but adapted to the changes I suggested,” he says.

A Change of Plan
As of today, Anand divides his time between photography and elephant conservation efforts. He is the Founder and President of the NGO Trunk Call—The Wildlife Foundation, which actively works towards creating a sustainable future for elephants and a harmonious coexistence for elephant and human communities.
In an interview with Rediff, his wife, Shriya Patil, had said, “Earlier, expenses, the home loan and EMIs used to get to him. He was materialistic. Being with elephants made him realise that there was more to life than money; it made him calmer.”
By now, it’s been close to three hours, and we haven’t stopped watching the photos and videos of Anand’s journey with the elephants. “Bohot kuch hai yaar, dikhate dikhate pura din nikal jayega,” he laughs. Those three hours spent in the company of Anand and the elephants made me think about how life as we know it can do a complete 180 degree flip without us even realising it. And that a little compassion, and a whole lot of love, can help us realise our own place in the world.

“I have seen the mirth in an elephant calf’s eyes when they play, I have seen the sorrow in their eyes when a member of their herd passes away. What is the need for language, when the eyes can express a feeling so much better? ” Photograph/Anand Shinde

About Anand Shinde
Often referred to as ‘The Elephant Whisperer’, Anand is a former photojournalist who has dedicated his life towards elephant conservation. His project, Dialogue with Elephants, has evolved from a photographic documentation of the elephants to a conservation project.