Simply titled ‘The Ballerina’, this image gives us an insight into Teresa’s world of humble, pure beauty. Photograph/Teresa Franco Teresa Franco speaks to Ambarin Afsar about her love for all things tiny, and how she wishes to spread this macro love to the whole world.

Teresa Franco’s Instagram feed will make you feel as if you are looking at beautiful things from another world, but it really is our own natural world, except up close and personal. When I first saw her photographs, I could not believe that they were not made with a DSLR-macro lens kit.

The Macro Bug
“I would never have thought that Instagram would have sparked such a strong passion,” says Teresa. “One of the people I follow posted a macro shot of a bug, and it blew me away. I remember thinking… wait a minute, how is that possible? The iPhone doesn’t zoom in that close! Thankfully, she had added an #Olloclip hashtag that led me to the world of macro lenses,” she says.

This discovery completely changed the way she looked at nature. “I have been looking at plants and flowers my whole life and I didn’t realise that there were so many incredible details that I wasn’t seeing.” She titles this image ‘Fuzzy and Ferocious’ in honour of the caterpillars who are destroying her garden one rosebush at a time. Photograph/Teresa Franco

The Magic of Light and Bokeh
Teresa’s photos are full of the lush greens of foliage, and in some cases, brilliant flare. “I love making photos early in the morning or late in the afternoon. That is when you get the best soft light. I like to move the camera around the subject, when possible, not only to find the best angle, but also a great bokeh background. It can make any frame look magical.”

Under the Umbrellas of Mushrooms
I was curious to know whether Teresa had made photos on DSLRs and whether using a cellphone gave her any kind of an advantage. “The size of the iPhone allows me to fit into tight spaces like under a tiny mushroom or between blades of grass. It also allows me to chase fastmoving insects inside bushes.” On the other hand, she thinks that DSLRs can be bulky and heavy, and can also slow her down in terms of setting the right aperture and shutterspeed. She often makes these typographical images out of shapes she sees in the macro world. Some are even meant as thank yous to her followers. Photograph/Teresa Franco

Getting that Perfect Shot
“Earlier, I used to follow a bug, hit the camera button like crazy and just hope that one out of hundreds of photos would end up looking decent. But now, I am more patient and can anticipate their next move. I am proud to say that I can make a couple of shots of a bug and walk away happy.”

Well Cooked Images!
It’s not just the shooting that requires perfection, but also the postprocessing. “My go-to camera app is Camera Awesome (iOS), it has a Fast Burst option that comes in very handy when I am taking photos of flying, jumping and crawling bugs. I also love that you can lock focus. I use these two features all the time.” She also uses Snapseed to adjust the brightness of her photos, as well as VSCO CAM (iOS) and Vintique (iOS).

Ultimately, Teresa loves showing people the beautiful details in nature that they pass by everyday and miss. “Beauty is not always hidden in the most colourful flower, it is often where you least expect it.” Made in the Muir Woods near San Francisco, USA, this image with delightful flare is from one of Teresa’s hikes through the woods. Photograph/Teresa Franco

• Go For the Details that Make You Happy: You don’t have to shoot what other macro photographers shoot. Find out what fascinates you! My favourite subjects are little seedlings, sprouts, dry petal curls and mushrooms.
• Experiment with Camera Apps: If you want fast shutterspeeds to capture bugs that are always on the move, sift through the current slew of apps to find one that offers a good range and control.
• Try to Keep the Tones Constant: Ensure similar treatment of all your photos, it makes for an attractive gallery. Apps like Vintique allow you to adjust the settings of each filter. This way, you can make a style of your own while using presets.

Self Assignment
If you do not want to go to a nature park and do not even find your neighbourhood flora and fauna inspiring enough to make cellphone nature photos, you can visit the local nursery! Not only do they have a large variety of plants, some can even be quite exotic and unusual.

She loves watching sci-fi and Japanese anime. She states Hayao Miyazaki as the inspiration behind her whimsical photos of moss forests and toadstools. She is a nursing student who came across macros while browsing through Instagram, and discovered Olloclip lenses. Besides her iPhone, Olloclip, SquidCam and Photojojo lenses, Teresa’s camera bag contains a phone tripod adapter, and some snacks. 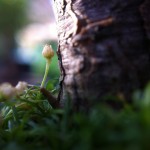 This image of new life germinating is just one of the many intricacies of nature that we miss on a daily basis. Photograph/Teresa Franco 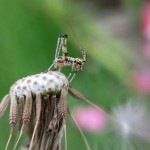 Teresa feels that mornings are a great time to shoot also because they bring with them dew crusted flowers and insects. Photograph/Teresa Franco 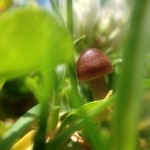 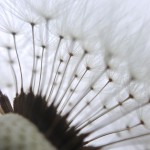 “I think I’ll just lay under this for a while,” reads Teresa’s caption on her feed. It indicates the wonder and the serenity that the natural world holds for her. Photograph/Teresa Franco 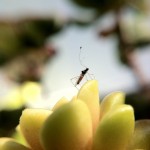 Teresa’s macro work is full of quiet moments such as this one of an insect resting on a cactus as the morning sun’s rays bathe it in gold. Photograph/Teresa Franco 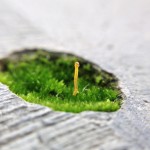 Teresa jestingly compares this upright pose of an inchworm in a crack in the sidewalk to that of larger predators who stand on their hindlegs to appear intimidating! Photograph/Teresa Franco