Raju Shinde: A Bag of Stories Raju Shinde talks about growing up in Mumbai and his career as a photojournalist, in conversation with Conchita Fernandes.

Having arrived at The Times of India Building an hour in advance, I was preparing myself to interview photojournalist, Raju Shinde. Soon, I received a phone call. It was him. A warm handshake and smile greeted me, followed by, “Hi, I am Raju.” What followed was an hour of an insightful conversation.

A Fascination of Photography
Raju’s interest in photography began at a young age. Each morning, he would spend hours looking at photographs in the newspaper. School vacations were spent at his aunt’s photo studio in Mumbai Central.

After a prolonged wait, he was finally gifted a Kodak film camera by his parents. He shot a lot. But since money was short, he would only develop the film rolls and see the results of his shooting after four or five months.

Developing his Skills
Fast forward to the year 2000 when he joined the Hindi edition of Saamna. Here, he was allowed to work on the condition that he would photograph as well as write his own stories. He went on to mention the cut-throat competition in the news photography business. “It is important to have a good network of sources who can ensure exclusive photographs.”

“Even though my aunt never taught me how to use the camera, I would just sit there and watch how a photograph is made.” Since a tabloid is visual heavy, Raju mentions that it is important that the picture conveys the story in a single view. Photograph/Raju Shinde

The Formidable Side of the Job
While he has photographed several exciting assignments, some have been alarmingly risky. The 26/11 Mumbai terrorist attack was one. He narrates, “My source called me up and said that there was a firing at the Taj hotel. Luckily, I was in the office and my boss had just handed me a brand new Nikon D300 that morning. As soon as I left the office, I heard gunshots at the CST station. At the station, I saw two men dressed up like tourists, with guns. At the time, I was only carrying a 17–55mm lens and photographed Kasab. This was also the first photograph that I made with the new camera.”

During this time, Raju also witnessed the death of a constable. Considering this, his family asked him to quit his job because of the dangers involved. “I refused. I will die when I have to.”

The Right Device
As the interview progressed, I asked him whether he shoots with his cellphone, a trend several photojournalists are adopting today. Although he is not an avid cellphone photographer, he mentions instances when the device has been helpful. He narrates, “During the 11 August 2012 riots at Azad Maidan, Mumbai, rioters were bashing up photographers who were seen with their cameras. In such situations, cellphones are great because you are not seen as a threat.”

As the interview came to an end, I could not help but admire the man sitting in front of me. Raju’s is a great story of what perseverance and belief can yield. He has come a long way from his humble beginnings in Malad. But the thing that touches you the most about him is his outward gratitude and modesty for the various turning points in his career. Some of his stories have an underlying tone of individuals emerging against all odds. In many ways, it is quite similar to his life and struggles. Photograph/Raju Shinde

Gadgets and Gear
• He currently uses a Nikon D 300, which he calls his favourite camera.
• That said, he maintains that vision should not be dependent on equipment. The right gear is important for photojournalism, but it is no magic trick. T he best camera is no DSL R. It is, simply, empathy.

Tips by Raju
• In order to be a good photojournalist, you have to be active and ready at all times.
• It is important to inform the editor about your assignments and whereabouts. They can come to your rescue if you fall into trouble.

About Raju Shinde
He has over 13 years of experience in the field of photojournalism. He recently won the RedInk Award for Picture of the Year 2013. Currently, he is the Chief Photographer of the Mumbai Mirror newspaper. 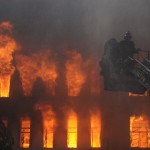 His profession often takes him on dangerous assignments and hazardous terrain. It is this nature of his work that he finds most thrilling. Photograph/Raju Shinde 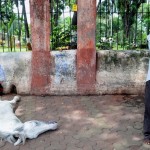 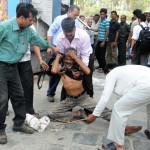 Raju mentions how it has become difficult to photograph in Mumbai. Most of the time, either the police or the subjects are hesitant of being photographed. Nevertheless, this has just made his resolve stronger. Photograph/Raju Shinde 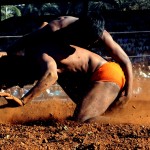 Raju feels that a lot of young photographers look for a quick fix, when in fact they should be shooting a lot more. Photograph/Raju Shinde 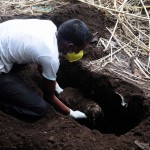 Raju mentioned the importance of arriving early at a scene in order to get an exclusive shot. Photograph/Raju Shinde