India as a Conundrum, Where Things Churn

“Seeing the ordinary extraordinarily has produced some incredibly good work from India in the recent past, especially from a new generation of photographers. I believe it is all tied in to India’s condition of various opposites that exist within the same space. They are inextricably linked, but also largely oblivious to each other.” 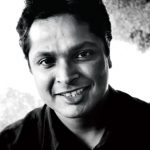 K Madhavan Pillai
has been a photographer for 25 years, and is the Chief Editor of Better Photography. He has served on the judging panel at several international and national level awards, including the National Photography Awards by the Government of India, and has been invited by educational institutions, as a lecturer, a Masters degree jurist, and in an advisory capacity.

As the Editor of a photographic journal from a developing, majority world country, I am continually assailed by questions, both from photographers and from my own explorations on the subject. It is interesting to see how some photographers navigate through the cracks to have an individualistic voice in a largely conformist society, and how democratisation is more to do with mere availability of picture making, in an environment where the immediacy of need is a continuous socio-economic reality for the larger masses, and how the meaning of it is different in India, as opposed to its connotations with practice in the west.

I have a personal distaste for the word ‘democratisation’, especially in the Indian context. Being a graduate in economics (photography was not a mainstream, formal course of study in India back then), a different perspective presents itself. There is a largely prohibitive, ever-changing, technocratic ecosystem surrounding the digital medium that is not adopted by a larger section of the population in India. So while India is on the world map with the highest number of selfies on social media, it mostly comes from a smaller segment of the population in a distinctly Maslovian manner.

Kodak had a big role to play in changing the world. “You push the button, we do the rest.” In many ways, film and inexpensive box cameras had a larger reach in the rural interiors. In the late 90’s and early 2000’s, a family would spend six or seven hundred rupees to make 36 photos—a plastic fixed focus box camera with an inbuilt flash, batteries, a roll of film, developing and a contact sheet. A single roll of film would last several months. Photographs were made carefully, consciously, at family events and festivals. Those who could not afford even this, would find a local or traveling studio, often at village fairs, with props that usually showed their aspirations, to make a single family or couple photo for a few Rupees. All that is gone now. 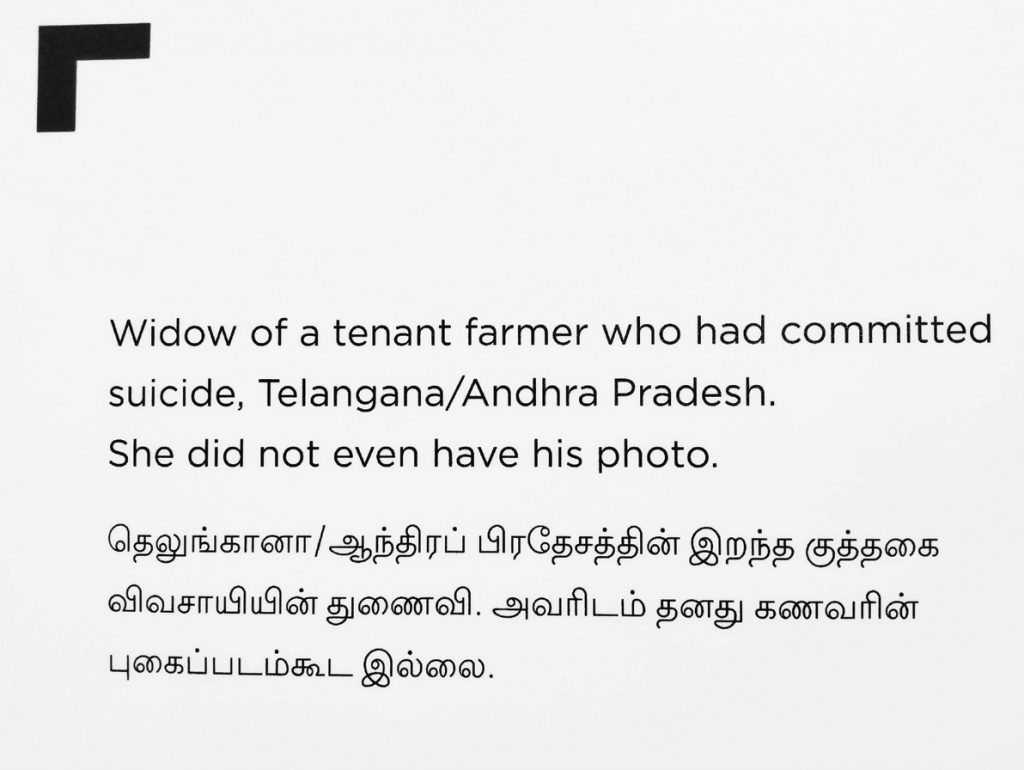 A caption from Vijay Jodha’s exhibit titled The First Witness, at the Chennai Photo Biennale 2019.

It is quite pertinent to note a distinct lack of interest in history, and in preserving history, by the people who make most of the images today. The recording of history, it may be argued, happens organically through a million eyes now, geotagged and stored in cyberspace. Just as artifacts dug up combing through the sands of time, a few of these images may well tell their stories in the future. A lot would be lost to interpretation, and in translation, and it is not difficult to imagine that everything could simply be wiped out of its virtual existence. But, in the end, hoping for history to be recorded organically is not the same as being actively participatory. All of this would be somewhat of a common affliction around the world. However, it manifests itself more significantly in India. Despite the proliferation of the smartphone, one really can’t escape the immediacy of need, of seeking immediate gratification, in the consuming and producing of images, so to speak.

Then there are those who rise through the cracks, producing works that become statements. However, as long as photography is able to fulfill basic needs, there is enormous, unquantifiable value. Practical purpose cannot be separated from photography and we must understand that this is the reason for photography to become essential, affecting every area of our lives, whether we know it or not. But why is the lowest common factor so important for the future of photography? It is oft said that photography is a commonly understood language, with its own grammar, syntax and purpose. When a language becomes extremely rooted with common understanding, this is when appreciation begins, and people with something to say gain a voice. This is when the thinkers and poets emerge from within realities so plain, that they don’t just fade away. They become impossible to ignore.

Music, as a form of art that is practiced and appreciated by every level of society, comes to mind. Still images may now never surpass music or cinema as practical entertainment for the lowest common factor, as a means of escape, intellectual or otherwise, or fantasy. Of course, commercial advertising is still very visible on hoardings, shop windows and magazines. Local hairdressing salons and small town garages still have pinup posters of filmstars tacked on walls. But the place of photography is very different. Photographs, as moments trapped, have the power to trap both the subject and the viewer within it. Potently, it latches on to memories, and hinges on identity.

This may be nice to think of as middle class rhetoric, but in India, among the poorest sections of society, it becomes a very disturbing, ominous truth… A portrait becomes very important when someone dies, as a remembrance, to pray for, to pray to. In most cases, the only portrait available comes from an old identity card that belonged to the person. I have seen photo labs operate round-the-clock businesses based on this need—to scan, retouch, even reconstruct, and make a single print. There are also many, many families with no photos of their loved ones at all. 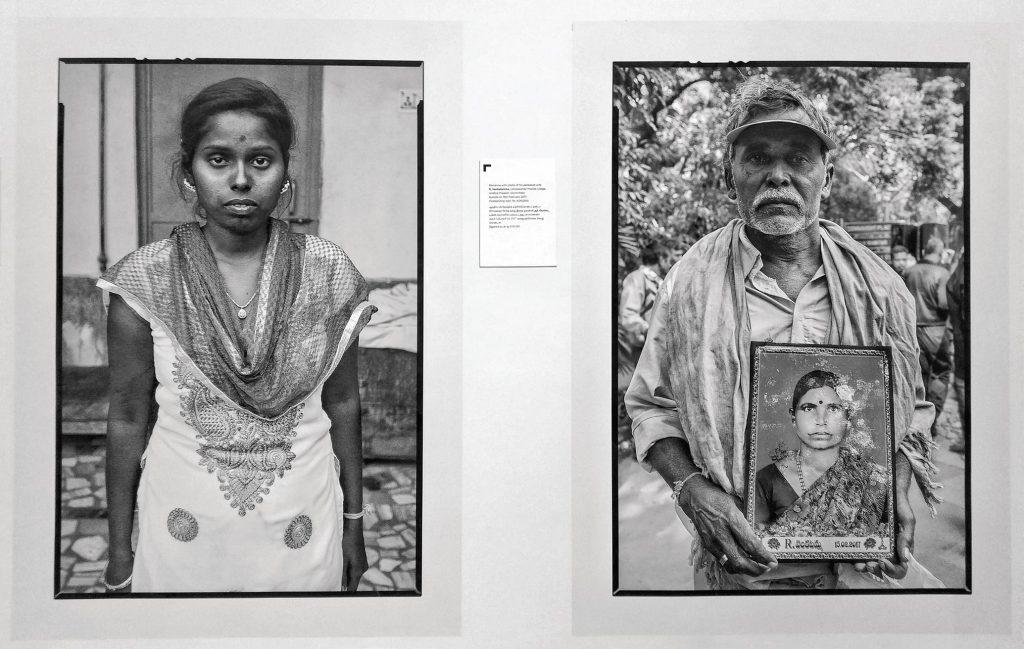 A section of the exhibit of Vijay Jodha’s portraits of the kin of farmers who committed suicide because of unpaid loans. Titled The First Witness, the series is displayed at the Chennai Photo Biennale 2019.

Art in photography takes on other hues. It has always been the purview and pastime of the elite. It perhaps allows a variety of self-obsessed, self-cannibalising power circles, especially in the academia of it, in the production, display and consumption of it. A lot of it is produced as experiments, or because a market exists. A lot of it is righteously meaningful. A lot of it is also beautiful and extraordinary. And it’s all good, none of it is bad. I find an odd sort of disparity though, especially in the Indian context, where photographic art, especially in its documentary forms (photography is documentary, in a very foundational sense, but can also be so much more), is distinctly devoid of emotions, but is expected to connect with a people who are otherwise quite emotional in nature. Good photojournalism, despite its oft moralistic gaze, connects in a direct, more powerful manner. So does good wedding photography. Both purposeful forms of practice, that also satisfies the conditions of need, the recording of history, emotional context, and more likely to survive through succeeding generations in institutional archives and family photo albums, and less likely to be completely forgotten.

Living within a country where the economics of necessity govern sentiment and approach, Indians are largely a people who require a reason for whatever they do. Separating activity from intent, or result from process, or the medium from the message, is perhaps the most difficult aspect for Indian photographers to contend with. And yet, some very fine, beautifully nuanced ways of seeing has come from this separation.

The Indian condition is unique, and the churning is already bringing some superb young artists to the fore, possibly because they need to work so much harder for their images to speak above the cacophony of it all. Plainly speaking, I am excited by where all of it leads.