Known to many as the modest ‘amateur’, Umrao Singh Sher‑Gil is considered to be one of the pioneers of photography in India. The following article, written by Deepak Ananth is an excerpt from the book “Umrao Singh Sher-Gil, His Misery and His Manuscript”.

Umrao Singh Sher-Gil was of course an ‘amateur’, in the noble sense of the word. Amator: one who loves, and loves again; one who renews his pleasure. And his pleasure in taking photographs went hand in hand with projecting an image of himself as intimately involved in the photographing process. For someone who spent a lifetime tinkering with modern gadgetry, photography was the happiest medium of all, given the visual record it offered of the manual activity that is the bricoleur’s pride. The appliances were objects that had been handled, that served a purpose, but it was important that he visually inscribe himself in proximity to them, in the act of manipulating them; the photograph was a confirmation of the childlike delight of the adult who persevered in a hobby as if it were a vocation. The era in which Sher-Gil began taking photographs – the early 1890s – was precisely when the camera became increasingly available as a portable toy for the leisured classes, although being the serious amateur that he was meant that his curiosity about the technical procedures of image duplication was undaunted by the earlier, more cumbersome, photographic apparatus with which his apprenticeship in the medium took place.

Umrao Singh Sher-Gil greatly admired Tolstoy, and even had his attire designed to resemble the tunic in which Tolstoy was usually photographed.

Born in 1870 to the landed aristocracy of the Punjab, Umrao Singh Sher-Gil of Majitha seems to have been the proverbial son who opted for a more contemplative life than his class had destined for him. A scholar of Sanskrit and Persian, he was exercised by questions of the philosophical basis of religion. He greatly admired Tolstoy, and fashioned his existence (and his self-image) in emulation of the profoundly humanist precepts of the Russian master, even to the extent of having his attire designed to resemble the tunic in which Tolstoy was usually photographed. He appeared to participate in the worldly rites that his rank entitled him to and yet seemed aloof from the world in which he found himself: his selfportraits show him becalmed in his study, ruminatory, absorbed in his reading and writing, savouring his spiritual solitude. He was fascinated by astronomy, loved carpentry and calligraphy, and practised yoga. There was application in his pursuits, and the occasional flourish that was the elation of someone who was a freelancer in self-improvement.

The camera registered his self-absorption, but what it did not record of Sher-Gil’s life needs to be brought into the picture, too – notably, his political sympathies whose repercussions probably reinforced the reclusiveness in which he was later to take refuge. In contrast to the other notables of his clan who were British loyalists, Sher‑Gil was a nationalist, committed to the idea of freedom from colonial rule. It was not his allegiance to the ideas of Nehru and Gandhi, however, that marked a tide in his fortunes, but the discovery by British Intelligence of his links with the Gaddar Party, a revolutionary group fighting for Indian independence, spearheaded by members active in Berlin between 1914 and 1917. Subsequently, most of Sher-Gil’s lands were confiscated by the British; he was allowed a relatively modest remittance and, of course, debarred from any active involvement in politics. Sher-Gil’s life in the aftermath of World War I would have been even more marginal had he not been well born, and had he not the forbearance that was his inner resource. His scholarly inclinations, the felicities of family life and his abiding interest in photography – this was his little universe, and the camera was there to record it. Of Sher-Gil’s passage to manhood and his first marriage, the visual record appears to be less than abundant. It was when he married for a second time (his first wife had died in 1907) that the family album began to assume the proportions of an archive. Marie Antoinette Gottesmann Baktay, who was Hungarian, had trained as an opera singer; she was in India as the travelling companion of Princess Bamba (daughter of Maharaja Duleep Singh) when she met Umrao Singh Sher-Gil in Lahore. The couple left for Budapest soon after their marriage in 1912. Their two daughters were born there, Amrita in 1913 and Indira in 1914, and owing to the outbreak of World War I, the family was forced to stay on in Hungary till 1921. Thus the Sikh aristocrat made his entry into the world of the Central European bourgeoisie, focusing his lens on the trappings that furnished a certain idea of the decorum that the enlightened classes had of themselves and their upholstered lives. But it was his wife and two daughters who were the cynosure of his eyes, and the Magyar chapter of the family chronicle records the enchantment of the newly minted pater familias in the presence of so much Gemütlichkeit. The little girls were adorable and the adoring gaze their father cast on them acknowledged as much: he couldn’t not have photographed them – in the nursery, on a promenade with their nanny, in the salon, in the country, on family picnics. … To a degree reminiscent of Lartigue, Sher-Gil’s photographic universe began and ended with the members of his immediate family. The décor in which they were framed was not less eloquent than the bourgeois rites that were conducted in its midst.

Sher-Gil appears to have been a pasionaria of music (and probably connoisseur of operatic emotions, too); her husband took innumerable photographs of her playing the piano, reclining in bed, presiding over her ornate domain. The photographer makes an appearance, too, often paired with his wife, but in his European guise: shorn of beard and divested of turban, in a three-piece suit and topical haircut. (The point made by the images of Marie Antoinette taken in Lahore soon after her marriage to Umrao Singh and prior to their departure for Budapest was also sartorial: a European woman in Indian finery.) But it is when Sher-Gil takes to posing himself in Indian dress that costume is revealed for what it is: an accessory for someone who wants to see himself as part of a tableau. Was it in response to a yearning to assert his Indianness – after having spent more than four years in Budapest – that Sher-Gil resorted to photographing himself in Indian clothes: whether lounging on an ‘oriental divan’ in 1917 (Goethe would have smiled!), or posing in front of his elaborately framed painted portrait such that the gaze of the painted visage appears, disconcertingly, to be observing this little mise-en-scène of the photographer photographing himself?

As Roland Barthes remarked in connection with that inveterate orientalist Pierre Loti’s penchant for disguise, ‘we know that the garment does not express but constitutes the person; or rather, we know that the person is nothing but this desired image which the garment permits us to believe in. … The goal of transvestism is finally (once the illusion of being is exhausted), to transform oneself into a describable object – and not into an introspectible subject.

Sher-Gil’s photographic universe began and ended with the members of his immediate family.

Umrao Singh Sher-Gil’s photographic archive constitutes a parallel legacy and, notwithstanding the private nature of its contents, throws into relief the role of personal agency in the construction of a modern proto-postcolonial subject. That he was a reclusive and genial eccentric should not obscure the scope of the project that photography – modernity’s most important invention, its mirror – enabled him to undertake: the project (although one doubts that he would have described it thus) of modern self-fashioning. (Tagore and Gandhi, the two luminaries who were Sher-Gil’s contemporaries, would be less than emblematic presences had they not projected iconic images of themselves: the poet as oriental sage, the freedom fighter as marching ascetic.) The hundreds of photographs that Sher-Gil took of his family form an extraordinary record of the life-world of an Indo-European family, and are a valuable document in the archives of modernity – in the large sense of that term. He deserves to be seen as a pioneering figure of Indian photography, an auteur, in the sense in which his daughter, with far greater temerity and boldness, had assumed to be as a matter of course. He had followed her self-transformations, probably as beguiled as she was by the face she presented to the world. And yet many of the photographs taken in the late 1930s disclose a lingering disquiet in her expression.

The questing look that confronts us in the photograph that shows her momentarily turning away from her easel, paintbrushes in hand (one of the rare images of her at work), suggests a restlessness that shades into something rather more melancholy in the more formally posed portraits. Exquisitely draped, she appears nevertheless wistful, somewhat withdrawn, gravely beautiful. Was it due to a growing sense of isolation that had crept upon her in the years prior to her sudden death in 1941? (She alludes to her intellectual solitude in some of her letters.) And yet the pictures she painted at the time hardly indicate a failure of artistic nerve. On the contrary, they suggest that she was poised to become a truly major artist. But that promise was to remain unfulfilled.

Sher-Gil’s photographic archive constitutes a parallel legacy and, notwithstanding the private nature of its contents.

Henceforth the radiant being would be a posthumous presence in the family album. The sadness that had hovered in Sher-Gil’s gaze now came to dwell for good. We see him in the company of his wife in their shadowy living room; or Indira playing the piano in what used to be Amrita’s studio. The rooms are often unpeopled (even prior to Marie Antoinette’s suicide in 1948). There are views of the surrounding mountains seen through the windows, of a landscape covered in snow, with the dark silhouette of Sher-Gil in the middle distance. The late self-portraits have a haunting gravity about them. He is in his study, reading or lost in thought. There are images of empty rooms, the outdoor light screened by the fluttering curtains; or a nocturnal vision of his bedroom illumined by the harsh glare of a bulb. But mostly the rooms are shrouded in darkness. He was alone with a lifetime’s worth of photographs.

This article originally appeared in the November 2008 issue of Better Photography. 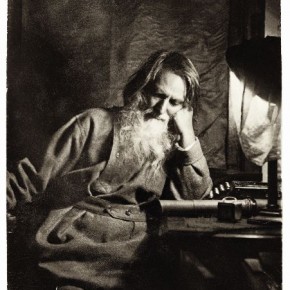 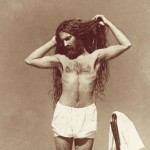 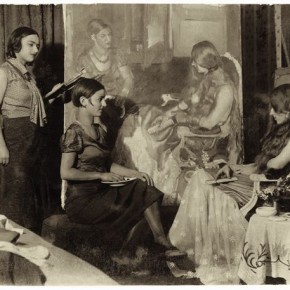