TNA Perumal was a beacon of light in wildlife photography, and followed by generations of conservationists, naturalists and photographers today. Sakshi Parikh looks back. Jim Corbett, in his well-known book, Jungle Lore said, “The time I spent in the jungles held unalloyed happiness for me. My happiness, I believe, resulted from the fact that all wildlife is happy in its natural surroundings. In nature there is no sorrow, and no repining.”

Unlike Corbett’s other classic man-eater titles, this book ruminates about joy and celebration in nature’s grand scheme of things. It’s not surprising to learn that this was Thanjavur Nateshachary Ayyam Perumal’s favourite book. He identified with Corbett’s intimate lifetime love affair with the jungle.

The doyen of wildlife photography in India, passed away on 8 February, leaving behind a legacy of thousands of images, which meticulously recorded everything he knew about the vast forests and its inhabitants.

An Evolution From Gun to Camera

Growing up, Perumal surrounded himself with natural history books, shikaar classics and true-life adventure stories. They transported him into a world of wilderness that would later become a reality. A former huntsman in the 1950s, just like Corbett, the then 20-year-old Perumal’s life was changed after a chance meeting OC Edwards, a pioneer in bird photography, when both of them shot a barn owl in entirely different ways. Soon Perumal left his rifle and began shadowing Edwards. He taught Perumal how to photograph birds-at-nest, by using an air-release remote control with a camouflaged camera on a machaan. “All my schooling in photography was under Edwards, who was a perfectionist, and a practitioner of ethics in bird photography. His principle was simple. The welfare of the subject is more important than the photograph,” Perumal commented.

The Language of Nature…Pure and Simple

Perumal took up imagemaking when it was in its infancy in India. Along with the ardent need to understand the subject, the medium at the time also required hard work and unflinching dedication.

As a master of the darkroom, he treated every print as an individual piece of art on its own. Perumal believed that the play of light captured on film needed to be carefully defined on the print. He frequently employed a variety of darkroom techniques to achieve this.

Even thought he was a traditionalist in terms of his values, Perumal was always drawn to new ways of experimentation. He would sit for days either hidden or on machaans, or quietly by a bird-stocked wetland. He would wait for the moment to fall magically through his lens and on to his camera plate. Perumal would later spend hours, bathed in the red light of his developing studio, creating his masterpiece.

His work with the infrared light beam technique was far ahead of its time, and resulted in some of the most iconic photographs of owls in mid-flight. Even today Perumal’s pictures bring nature alive in ways that only he knew.

Initially, he was drawn to the pictorial genre of photography where the subject can be animate or inanimate. It is the treatment along with one’s personal expression and vision that is important. Perumal’s early attempts in that field were inspired by another great stalwart in pictorial photography, C Rajagopal, who insisted that he explore the genre. However, his interest in pictorialism was soon replaced by a fascination with nature and wildlife photography.

With an insurmountable technical knowledge about photography, he dedicated a lifetime towards understanding animal behaviour and psychology. He had also mastered the art of bird calls and animal calls, which helped him in his shooting adventures in the depths of the forest.

Bittu Sahgal, an environmental activist and the founding Editor of Sanctuary Asia, recalls a time when he was in Ranthambore with Perumal and his close friend and patron, MY Ghorpade. “I was following both of them when we heard a chital (deer) call. We halted on the mud path and stayed in the jeep for 40 minutes, when suddenly, an extremely intuitive Perumal gestured to reverse our jeep by 30 metres. A few seconds later, a tiger walked between our vehicles and he got his image.”

Whether it was the elephant that charged towards him on one misty day and then stopped short because of the trench between them, or the vine snake that finally pounced on a frog, Perumal’s photographs usually had a back story. He recorded the drama with both words and pictures.

As a conservationist, he always believed in leaving his subjects unperturbed by his presence. “A bird from a flock, or an animal from a herd, is taken by a hawk or a carnivorous beast and those that are left rejoice that their time had not come today, and have not thought of tomorrow. If you force an animal to look at you, you’ve changed his behaviour,” he said. Yet, animals often looked into Perumal’s camera as he would make himself as inconspicuous as possible, a strategy that always yielded dividends.

Perumal’s images were a reflection of his own personality— simple and elegant. Throughout his lifetime, he authored several books, won many awards like the Fellowship at the Royal Photographic Society and National Award for Lifetime Achievement in Wildlife Photography by the Government of India in 2012. He also mentored several eminent wildlife photographers like MN Jayakumar H Satish, Mohammed Arfan Asif and Sabyasachi Patra.

H Satish remembers him as, “TNA Perumal left us all behind with beautiful memories. Even though he was a stalwart in wildlife photography, he was a humble person, unfazed by the awards and fame he earned during the six decades of his photographic career. He would survive with the bare minimum, and had made art his life.” A treasure trove of information, Perumal believed that one needs to keep his imagery deceptively simple in order to achieve higher results. “To be a successful black and white photographer, one needs to learn how the film sees the colours in the scene rather than how one’s eyes sees them,” said the photographer, who shot both in colour and black and white.

“All those interested in wildlife or in the art of photography, had to do was sit with him and almost as if by osmosis they will learn. And if you cannot sit with him, then sit with his images. They speak his language, which is the language of nature, plain, simple and utterly brilliant,” Sahgal fondly remembers.

The Rationale of ‘Reminiscences’

His book, Reminiscences of a Wildlife Photographer, is a compilation of his life’s work, where he goes into several forests and jungles across India and East Africa, exploring flora, fauna, birds and insects. In the process, he gradually provides you with an understanding of patience, perseverance, skill and dedication that are essential to document the grandeur of nature in its pure form.

Even in the autumn of his life, Perumal managed to maintain the inquisitiveness of a child. “In a section of psychology called Transaction Analysis, there is a system of behavioural pattern called the Child Ego state. It is the state of constant curiosity. Perumal was always sure about his art, but was equally curious to learn more about other unconventional methods. For him, life was about continuous learning. His curiosity never left him,” says Sabyasachi Patra.

For the Love of Imagery

Over the years, Perumal had seen the rapid decline of natural habitats and wildlife in and around Bengaluru and across India. “During our photo tours, he would point out barren landscapes, which were used to be lush and a flourishing home for blackbucks to graze in. But now there wasn’t a shred of vegetation visible. Perumal felt extremely fortunate to have witnessed the wilderness in the early 1900s,” adds Patra.

Perumal felt that one good photograph could educate people about the environment, much more than a shelf full of books. For him, words could not do justice to the elation one feels walking through the familiar incessant drizzle that characterises a forest in the monsoons. He celebrated the magic of mysterious jungles as he strolled around with his borrowed Kodak Baby Brownie camera, listening to the soothing sound of water dripping from wet branches to the leafy jungle floor. “The forest represents so much, and is represented by so many… and I’ve not even come to the impact that its animal inhabitants have had on me.” 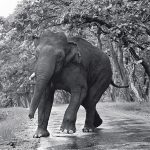 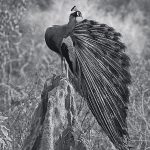 A peacock atop an anthill. 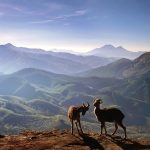 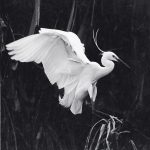 A great egret, Ardea Alba, landing on a branch. 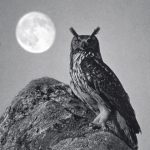 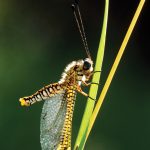 An owl fly, Ascalaphidae, resting on a blade of grass 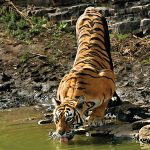 A tiger drinking water from a stream on an extremely hot day. 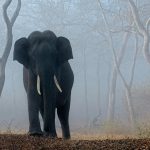 A tusker strolling through the mist in Bandipur National Park, Karnataka. 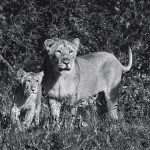 An Asiatic lioness with her cub. 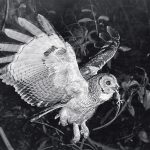 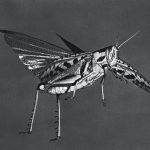 A spur-throated grasshopper in flight. 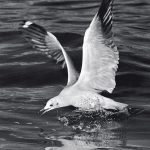