Take a journey through the American past, as Supriya Joshi introduces you to the works of photography pioneer Timothy H O’Sullivan. While many photographers from the early 19th Century are very popular, there are some, who unfortunately, get lost in obscurity. This, of course, is no indication of the impact they might have had on photography.

This is why I would like to introduce you to Timothy H O’Sullivan, an early adopter of the art, and someone who has, in his own way, helped define and create the rules of photography.

Learning from a Legend
As a teenager, O’Sullivan’s first foray with photography began while he was assisting Mathew Brady. Brady himself was an extremely popular American photographer, who became famous for his photographs of the Civil War. At such a young age, he learned the nuances of image making and portraiture, and was able to create some of the most striking scenes from the war front. It is important to note that at the time he was making pictures, the purpose of image-making was not aesthetics, but documentation. Yet, his work diplays an inherent understanding of composition and vision, a nonexistent parameter back then. Aboriginal life among the Navajoe Indians. Near old Fort Defiance, 1873. Before him, no one had photographed native Americans in natural settings. Photograph/Timothy H O’Sullivan

He had also worked under Alexander Gardner, another renowned Civil War photographer. O’Sullivan’s work was featured in his book, Gardner’s Photographic Sketch Book of War.

The Chosen One
As his vision and work began to rise in popularity, more and more army generals requested O’Sullivan to follow them during war. In 1864, he went along with General Ulysses S Grant and his troops, and photographed the Siege of Petersburg. Creating daguerreotypes under extreme conditions were difficult and a major risk to his life, yet O’Sullivan persevered and continued to make images. “The Harvest of Death”: Union dead on the battlefield at Gettysburg, Pennsylvania, 1863. Photograph/Timothy H O’Sullivan

After the war, however, he realised his real interest was in landscape photography. In 1867, he joined a geological survey to explore the territory between the Rocky Mountains and the Sierra Nevada Mountains, which was the first governmental survey of the American west. It his from his voyage that unforgettable photographs from such unchartered territories emerged. The Exploration Begins
The expedition itself was headed by geologist and mountaineer, Clarence Rivers Kings. First on the agenda was Virginia City, Nevada, where O’Sullivan extensively photographed mines and the people who worked there. As they moved eastward, he began documenting the natural wonders, mountains and rivers, which had never been photographed before. In doing so, he became the pioneer of geophotography. His images became incentive for the people of America to start moving and settling to the west. 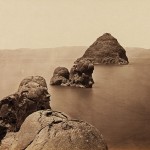 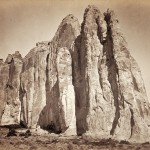 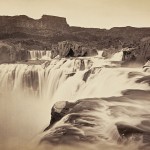 The End of an Era
O’Sullivan passed away in 1882, at the young age of 42, from tuberculosis. Yet, in a short while, he was able to make a mark in history and leave behind a legacy. More than anything, what us 21st Century photographers can possibly learn from his work is simply this—if you love what you shoot, it will reflect in your work.