After Ghosh met Subhash Chandra Bose in Puri, Orissa, he went on to shoot him a lot more. Shown here are Netaji and the then Shankaracharya of Puri. Photograph/ Manoranjan Ghosh

Ambarin Afsar revives the forgotten story of the life and works of Manoranjan Ghosh, an exemplary man with a scientific bent of mind.

The city of Patna has seen many highly skilled painters and artists rise from strength to strength. However, the name of a great photographer slipped down this list and was gradually forgotten—Manoranjan Ghosh. I first came across Manoranjan’s name, fleetingly, in a tiny newspaper article on his contribution to photography. A quest to learn more led me to his son, Rajat Ghosh, who resurrected his memories of his father. The trip down memory lane transported me to the days when photography was taking its halting steps in India. I felt the intensity of the Independence movement and got acquainted with the fervour and the single-minded zest, which marked Manoranjan Ghosh’s remarkable life and stayed with him till his last breath.

A Character Develops
Manoranjan Ghosh, born in 1909 and schooled in Patna, was one of seven children—three boys and four girls. A quiet, pensive person, Ghosh walked with a limp as a heavy block of iron had injured his leg when he was four. But, he refused to use a walking cane or a crutch and staunchly made his way through life. Interestingly enough, he was fond of fragrances and collected them all his life.

Early Inspirations
An involvement with the creative arts began in Ghosh’s childhood—he used to paint and sketch extensively as a child. Teenage years saw him procuring various books which would help him analyse Western painters and their styles. It was perhaps this early understanding of the world of imagery that helped him learn theart of capturing fleeting moments.

An Encounter with Photography
Ghosh’s first encounter with photography can be traced back to his frequent vacation visits to his elder sister’s house in Balurghat, West Bengal.
His brother-in law, a hobbyist photographer, introduced Ghosh to the world of photography and lent him a Field View camera to tinker around with.
An eager learner, Ghosh learnt the basics of photography from his brother-in-law, but experimented on his own extensively. He would shoot in and around Balurghat, making a subject out of everything his eye could see. Later, he would take the help of his brother-in-law to process these photographs with whatever little material that was available in the distant region. His journeys back to Patna would be filled with the anticipation of researching various photographic processes. Sadly, all his photographs of this experimental period seem to be lost. But, what comes through is the fact that Ghosh largely self educated himself in photography and this experimental bent of mind stayed with him for the rest of his life.

A Tale of Two Studios
This photographic fervour did not go unnoticed by Radhakishore Ghosh, Manoranjan’s father. An employee in the treasury and granaries of the British Government, Radhakishore saved up enough money to start a studio in the late 1920s, which was to be managed by his two sons, Manoranjan and Hridayranjan. The studio, called the M Ghosh Studio, located opposite the Patna College, gave impetus to Manoranjan’s photographic abilities as he now had access to better equipment. This is where he began experimenting with the application of oil paints on bromides and made B&W photos come to life with his colours. Ghosh also came up with the innovative idea of dusting photographs with colour powders, which made them look like a striking mix of paintings and real photographs.
While Manoranjan worked in the darkroom, his brother, Hridayranjan immersed himself in managerial duties. Work flourished in the early years of the studio with large orders from British Officers who would come to get their negatives processed. However, in 1940, this sense of well being was disrupted by a difference between the two brothers and the studio was split into the Ghosh Studio and the M Ghosh Studio. The Ghosh Studio was taken over by Hridayranjan and shifted to Patna Junction, while the M Ghosh Studio, run by Manoranjan, stayed at its old location, opposite the Patna College.

The Freedom Struggle
In the decade before independence, Patna College was a hub of political activity. Major political leaders and freedom fighters would come to the college for speeches, gatherings and meets. This is where Manoranjan started photographing leaders like Sarojini Naidu, C R Das, Dr Rajendra Prasad and so on. He also photographed the visits of Gandhiji, Jawaharlal Nehru and Subhash Chandra Bose to Patna. This documentation of political leaders and the charged atmosphere in Patna continued even after independence. These were perhaps the most candid photos of leaders who shaped the freedom struggle. After the partition, Ghosh journeyed to Calcutta (now Kolkata) to document empty, broken houses and the ruin left behind in the city. These were some of the most evocative pictures, symbolic of that turbulent era.

The Magic Lantern
Manoranjan Ghosh studied till standard 12 and was extremely fond of reading books and gathering information. By the 1940s, he had a huge collection of books on artistic inventions and applications. Ghosh gradually worked on a path-breaking idea that would help spreading education to the remotest corners of Bihar, Orissa and other states—the Lantern Projector.
Completed in the 1950s, the Projector would use a gas lamp to project a larger image from a slide, on to a canvas cloth or screen. Something close to the Lantern  Projector had been developed inthe Western world in the early 19th century. But, it was primarily used for entertainment and road shows. However, Ghosh’s creation was unique because ofthe application—he wanted the projector to be used to educate people. He prepared many educational slides which were used by the then Chief Minister of Bihar, Sri Krishna Singh, for educational programmes in rural areas.

Death and an Abject Neglect
In 1981, a man of an otherwise strong constitution, Ghosh fell prey to problems of the prostrate gland. He was operated upon, but succumbed to the illness a month later. After his death, the M Ghosh Studio was shut down and shifted to Ranchi by a nephew. Consequently, all of Ghosh’s equipment and studio work was lost. Despite his contribution to photography and social welfare, Ghosh’s work remains largely unsung and neglected. His paintings and photos hang unnoticed in imminent institutions like the Old Secretariat, Delhi, various High Courts and Civil Courts. He left behind his work unarchived and subject to the vagaries of weather, termites and silver fish.
We honour Western inventors who developed the art of photography. But, we have forgotten the people who applied this art to the Indian subcontinent and documented the socio-cultural history for posterity. Their names have been lost somewhere in the dusty archives of time. Every once in a while, someone blows the dust off a name like Manoranjan Ghosh, only for it to settle again.

The Working of the Lantern Projector The Lantern Projector has a concave mirror behind the gas lantern. This mirror gathers light and projects it through a slide with an image on it. The light rays cross an aperture and hit the lens. The lens throws an enlarged picture of the original image from the slide onto a screen. Educational slides were made on animal husbandry, literature, arts and other subjects. These slides were shown in remote villages with no electricity to educate children as well as adults. The Lantern Projector also gave impetus to the modern projector which is used in cinema halls. 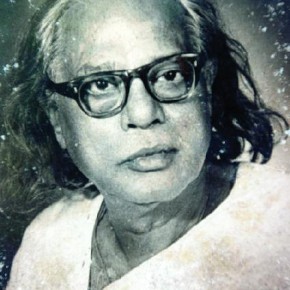 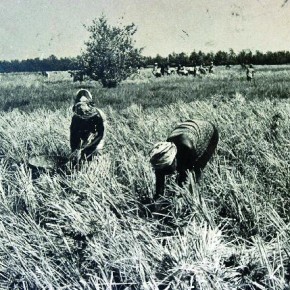 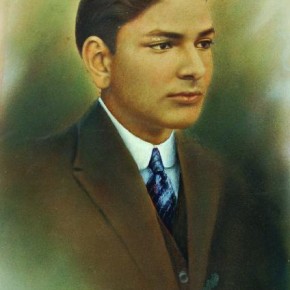 This is an early portrait of Chittaranjan Das, an eminent lawyer and founder of the Swaraj Party who was also known as Deshbandhu or Friend of the Nation. Photograph/ Manoranjan Ghosh 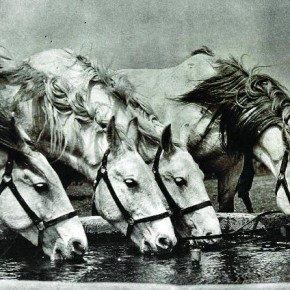 This picture of horses drinking from a water tank was taken during the hot summer of 1935 at the Danapur Cantonment, Bihar. Photograph/ Manoranjan Ghosh 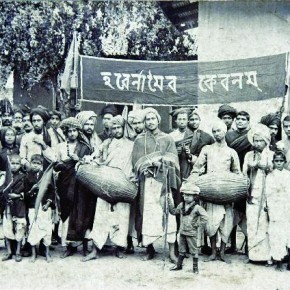 Groups of people would wander around Patna, singing devotional songs in praise of Lord Krishna in those days. One such kirtan mandali is shown here. Photograph/ Manoranjan Ghos 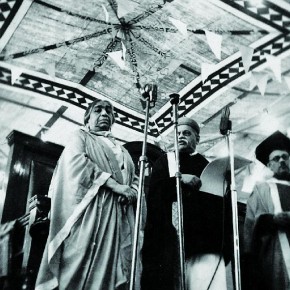 This picture of Sarojini Naidu was taken at a convocation at Patna College. Photograph/ Manoranjan Ghosh 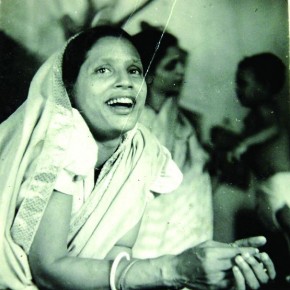 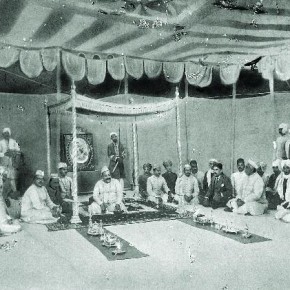 Shown here is the famous singer, Ustad Bade Ghulam Ali Khan, in a baithak or a gathering. Photograph/ Manoranjan Ghosh 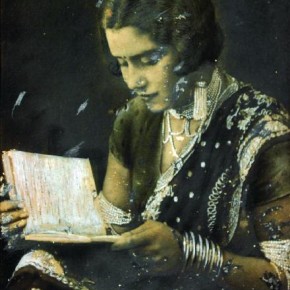 This rare portrait of a young Geeta Dutt (then Roy) was taken when she was visiting her brother-in-law Subodh Roy, in Patna. Photograph/ Manoranjan Ghosh 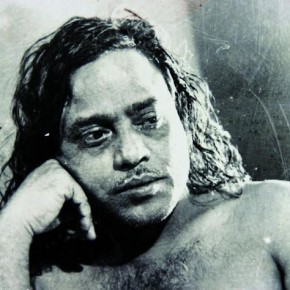 This self-portrait aptly paints Ghosh as an unconventional man for his times. Photograph/ Manoranjan Ghosh 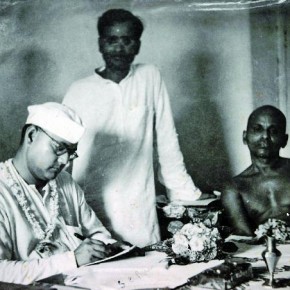 After Ghosh met Subhash Chandra Bose in Puri, Orissa, he went on to shoot him a lot more. Shown here are Netaji and the then Shankaracharya of Puri. Photograph/ Manoranjan Ghosh