Tigress under the banyan, Kanha, May 1968. Photograph/ Madhaviah Krishnan

Ambarin Afsar acquaints you with India’s jungles as seen through the eyes of photographer and naturalist, Padma Shri Madhaviah Krishnan.

This story was originally published in November 2010.

The day begins and I commence my daily travel. Once in the bus, I open Eye in the Jungle, a commemorative edition of Padma Shri Madhaviah Krishnan’s photographs. The book has been compiled by wildlife documentary filmmakers Ashish and Shanthi Chandola, along with TNA Perumal—a legendary wildlife photographer himself—who is extremely fond of Krishnan, as a person and a pictorialist. As I leaf through the book, I am transported to a dewy, green world covered by dappled sunlight, tucked away in the heart of the jungle. My companion and guide for this journey is M Krishnan’s subtle humour, biting wit and his knack of writing true-to-life, insightful descriptions.

Empathy above All Else
Never once in the book do I see a passage or a tone that implies the thought that animals are lesser beasts. There is adoration, amusement and even respect for the tiniest of creatures. An example jumps off the page as Krishnan writes about elephants throwing grass and earth over their backs after a bath to protect them from the sun and to soothe skin irritation. When no one was watching, Krishnan took a dip in a river, and upon coming out, threw some soft earth on his back! The water was cool and despite the noon sun, he was shivering. “I still remember how gratifyingly warm the thrown up earth felt against my spine. As the sun dried me and I began to feel the heat, the moist earth on my back felt refreshingly cool. I realise that an elephant’s hide is thicker than mine, but perhaps it is sensitive to thermal sensations.”

A Patron of Elephants
Out of all the animals he came across, photographed and researched, Krishnan probably had the greatest love for elephants. He talks about their exquisite sense of smell and a sensitivity to groundvibrations. Interestingly enough, this ability to communicate via seismic waves, was something that biologists and researcher sconfirmed much later. However, he was saddened by arguments that elephants are stupid because they allow themselves to be tamed. “The criticism that an elephant is stupid because it cannot work out a simple equation reflects the narrow mindedness of people. If it comes to that, no man can pull down and eat a clump of bamboo.”

The Writer and the Recluse
In 1942, Krishnan was given employment by the Maharaja of Sandur, a small princely state in the northern part of present-day Karnataka. It was here that the naturalist came across the sambhar, thewild boar, jackals, jungle cats, porcupines and leopards. What he learnt there found its way into nature essays, cultural profiles and short stories published under the nom de plume ‘Z’ in The Hindu. Scientific,speculative, and peppered with opinions and witty comments, his writings were published in The Statesman, The Indian Express, The Illustrated Weekly of India and other publications.

The Krishnan Innovations
Although Krishnan came to the craft whenhe was past 40, he brought with him aferocity of commitment. He preferred B&W film as it allowed him to make 36 x 24-inch or even larger prints to show animals in great detail. To meet these demands, he actually created a camera on his own, which he called the Superponderosa. Since Krishnan felt that the cameras of that time were not silent enough, he also crafted the Elephant Gun, a box-like camera apparatus made from a blackened red cedar wooden box with a roll film holder, a Schneider Super-Angulon240mm lens with its silent, inbuilt CompurBlade shutter fitted to a bellows unit.

A Patriot of India’s Biodiversity
Krishnan fought many battles on for wildlife management and on ethics in wildlife photography. He advocated maximum protection to wildlife and its habitat and least interference by man, saying, “Nature will take care of itself.” In his last column,printed in 1996, he spoke about the lack of conservationist measures, citing the reason that our Constitution was written by men who knew more about legalities than about the biotic richness of the country.
As I disembark, I find myself thinking about the times I have spent in nature parks, shooting the tiniest of details. I cannot think of places that are more peaceful and exhilarating. Was it this peace that Krishnan felt and wanted to share with the rest of the world? The journey ends and yet, does not. I may close the book, turn the page, but Krishnan’s gift of love, respect and wonder, will stay with me as long as I live. 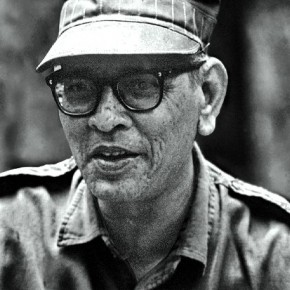 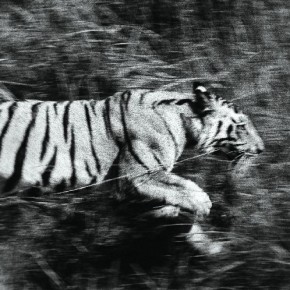 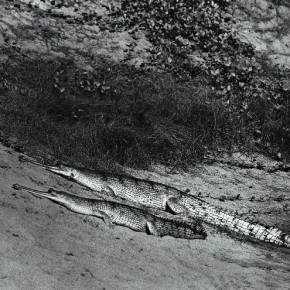 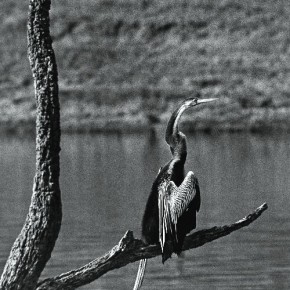 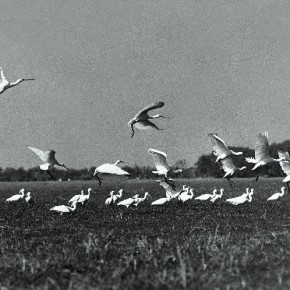 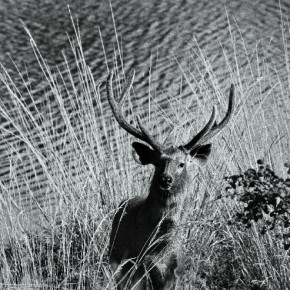 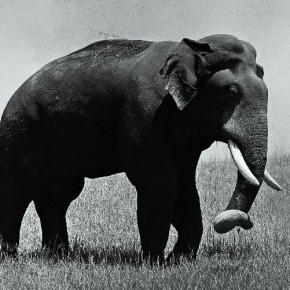 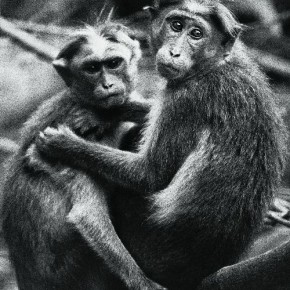 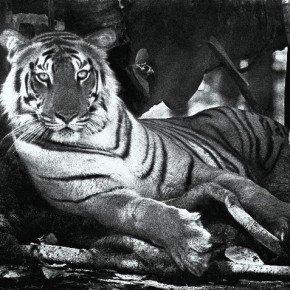 Tigress under the banyan, Kanha, May 1968. Photograph/ Madhaviah Krishnan