Kulwant Roy, the Archiver of India Khan Abdul Ghaffar Khan and Jawaharlal Nehru walk to a Congress meeting, while Sardar Patel is pulled alongside in a rickshaw. Roy’s access provided him with ample opportunities for informal photographs. Photograph/Kulwant Roy

Kulwant Roy was an unknown name, until his priceless images captured during the Indian independence period were found in old crates. Neha Mutreja unravels his story

Kulwant Roy. “These images remind of late stages of the freedom struggle and the beginning of an independent nation.” —Karan Singh

The crates stacked with old photographs were lying in one corner of renowned advertising photographer Aditya Arya’s house for almost 24 years. He finally opened them one day, and he was surprised to find a treasure—numerous photographs that reflected key moments in India’s history of independence. It was unimaginable that a long forgotten photojournalist from the pre-independence period clicked these pictures. This photographer was Arya’s uncle, Kulwant Roy. Roy’s images are a documentation of India during the pre- as well as postindependence eras. He has managed to capture raw emotions and crucial events that emerged from the Indian political movements. One is easily transported into these eras and swayed by the moments frozen into each of these frames.

‘Royal’ Beginning
Years ago in the early 20th century, Kulwant Roy was just beginning to learn photography from Raj Gopal, who ran a studio in Lahore. He later joined Royal Indian air force to take up Aerial photography. Roy was a passionate and headstrong Nationalist. He served the air force for a short while, but could not stand the discriminatory policies of the British Raj. He eventually left the air force after being court-martialed, and moved to Delhi where he established his own photo agency, Associated Press Photographs, at Mori Gate.

Capturing a Significant Time
Over the next few years, Roy followed Gandhi in his travels around India. His dedication and involvement with the people around him gave him an insider’s access to the galleries of Indian Nationalist leaders.

Pablo Bartholomew, a noted Indian photographer makes a similar observation: “It shows the proximity of the leaders to the people. The photograph of Nehru disembarking from a plane shows how close photographers could get to their leaders in those days…” Whether it was Gandhi and Mohammad Ali Jinnah in an animated discussion or Nehru’s grandfatherly hand curled around Rajiv’s neck, Roy was able to release the shutter at the perfect moment.

His photographs are not of political events alone. Some show luminaries in their most personal and vulnerable moments. They reflected an era of prolific writers and diehard Nationalists, and an age of aspirations and dreams to witness a free India.

“[ Roy’s images] show the proximity of the leaders to the people… and how close photographers could get to their leaders those days.”— Pablo Bartholomew

Globe Trotting
A decade after India won its independence, Roy decided to pack his bags and travel the world. He decided to carry along his photographs, to sell them wherever he landed. These images were different from what he had captured as a photojournalist. It had photographs of his pilgrimages around India, religious events and snow-capped mountains of Kashmir.

These pictures soon found their way into several international newspapers. At the same time, they helped him fund his travels too! His camera never left his side. As soon as he had taken enough pictures, he would pack them in a box and courier it to his office back in Mori Gate. Jawaharlal Nehru with his grandson Rajiv and daughter Indira before departing the country. Photograph/Kulwant Roy

Struggled Till His Last Breath
Roy returned to India after three years, but to his dismay, he found that none of the boxes had reached his office. He looked for them at post offices and even emptied the garbage bins of Delhi. But unfortunately, they were nowhere to be found. Roy was left heartbroken and penniless.

Roy continued to work till the mid 60s, documenting Jackie Kennedy’s visit in 1962 and India’s war with Pakistan in 1965. But a growing number of younger and aggressive photojournalists soon began to take over. Attending press conferences to listen to inspiring speeches and getting acquainted with leaders was slowly becoming a thing of a past. Roy was beginning to feel defeated and eventually stopped shooting.

A few years later, he was diagnosed with cancer. Sensing his end was around the corner, Roy decided to pile up boxes of his photographs on his Lambretta scooter and transport them to his nephew Arya.

A Hero is Unearthed
“I had been lugging these boxes about for several years”, Aditya Arya explains. “It was just last year [2007] that I decided to explore the photographs. I was taking a break from work and thought it would take about two odd months to finish. Those two months haven’t elapsed till now!”

Aditya collated these images, digitised them and held an exhibition titled History in the Making in New Delhi, on 3 October 2008. It was a huge success! “Being a photographer I knew I had wasted enough time. I left everything else to archive Kulwant Roy’s work,” Arya says. “That’s the problem in India,” Sadanand Menon, an arts and photography professor at Chennai’s Asian College of Journalism comments. “There is no agency that documents photographs and no photo historians at all. What we have are images shot by Margaret Bourke-White or Henri Cartier-Bresson.”

Due Credits
Roy had sold most of his photographs to international agencies, some of which were found in their archival databases. One image in particular is that of Jinnah and Gandhi, which Arya discovered in Getty Images’ archives. When Arya saw that they were credited to a nameless stranger, he informed Getty Images. McDonald , a Getty curator wrote back saying, “Yes we are happy to credit this image to Kulwant Roy.” Aditya Arya puts it quite simply, “For me making sure people know his name is as important as making sure they know his pictures.” The Maharaja of Kapurthala at the inauguration of the Patiala and East Punjab States Union (PEPSU) with Sardar Patel at the Motibagh, Patiala. Photograph/Kulwant Roy 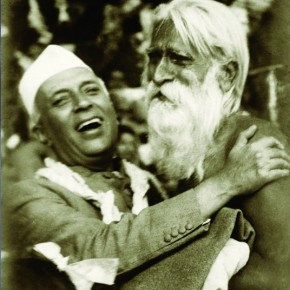 Nehru with a visitor at the Teen Murti Bhawan, Delhi. Photograph/Kulwant Roy 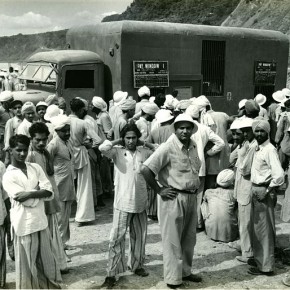 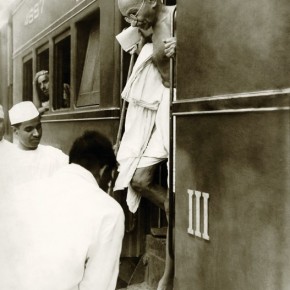 Mahatma Gandhi on a campaign tour. He always travelled in the third class compartment. Photograph/Kulwant Roy 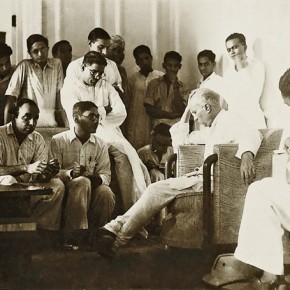 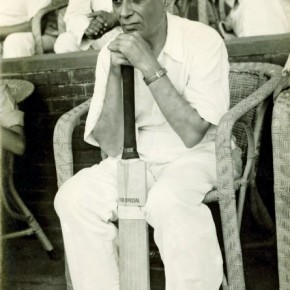