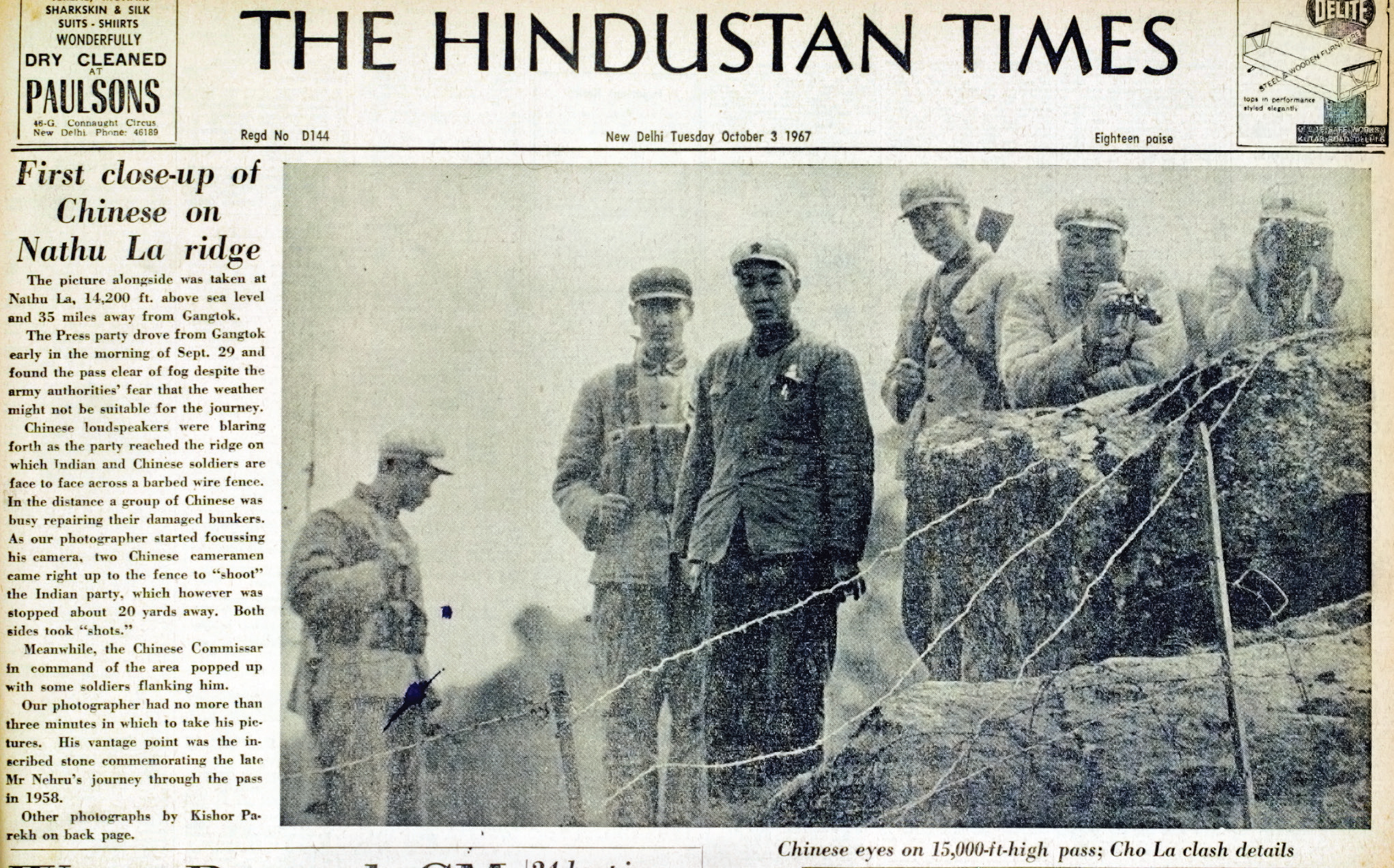 Parekh’s photos were revolutionary, as was the way they were published, due to his crusades.  From the archives of The Hindustan Times. 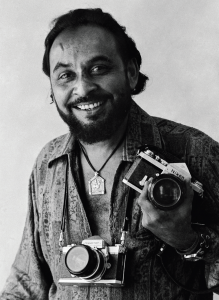 Raj Lalwani sifts through the tearsheets of history to look back at the work of Kishor Parekh, undoubtedly, the revolutionary of photojournalism in India.

News photography in India can be divided into two eras: the pre-Kishor Parekh phase, and the redefining of the medium that followed his resounding influence. That is why it’s a bit of a disservice that his legacy, for younger generations like mine, is most identified with his Bangladesh work that only happened a few years later. His powerful chronicling of the birth of that nation through relentless, gutwrenching photos of the war may be one of the most important documents of Indian history, but in terms of photojournalism, Bangladesh was his swansong, not his watershed moment.

Parekh was the only photographer to have made this iconic photo in Tashkent, on the night that the then-Prime Minister Lal Bahadur Shastri passed away. From the archives of The Hindustan Times

“Photographers should erect a statue for Parekh,” said N Thiagarajan, another icon of Indian photography, “he came to India and completely changed the style of news photography. But it wasn’t easy. He fought for it.” 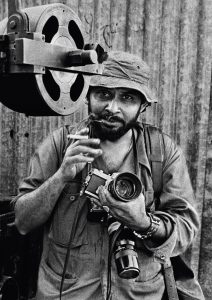 “A mix of Prince Henry tobacco from his perpetual companion, the pipe and musky Tabac cologne, I remember my stylish father by that fragrance. Whatever he did, he did with all heart. I believe it was this sheer indulgence of life that blended into oneness, each time he pulled the trigger of his beloved Nikon,” says son and photographer Swapan Parekh on the

Revolutionising the News Scape
Through his academic studies in USA, he armed himself with the knowledge of contemporary photographic practices worldwide and in turn, went on to introduce the concept of hitherto unseen full-page photo stories in the Indian media. It was he, who through his crusades, introduced Indian photojournalism to multi-column pictures and the use of 35mm. Until then, news photography was largely about manufactured photo ops and ribbon cuttings shot with the more restrictive TLR, but it was Parekh’s aggressive sense for storytelling, that drove him to use the 35mm format, starting with rangefinders and moving on to Nikon SLRs. “Running into the eye of the storm was his style,” recalls Pablo Bartholomew, who assisted Kishor occasionally in his teenage years.

Kishor Parekh’s iconic images are powerful, poignant, potent and yet compassionate, to the point of being historically perpetual in their recall. “Photographs should be full of untarnished facts”, he would say. And yet, he always managed to marry the factual with his potent artistic rendition, much in the tradition of the photographers he admired, like Eugene Smith, Margaret Bourke-White and Henri Cartier-Bresson, the work of whom he had analysed in his thesis during college.

His way of seeing and foresight in moulding the reportage landscape (reflected even during his pathbreaking commercial career in the 70s) can probably be traced to the fact that he was the only photojournalist of his time to have a Master’s degree in cinema and documentary photography. This was in addition to an internship at LIFE magazine that he had won (as an award in a photo competition organised by the publication. Parekh had won an unprecedented six categories out of seven). 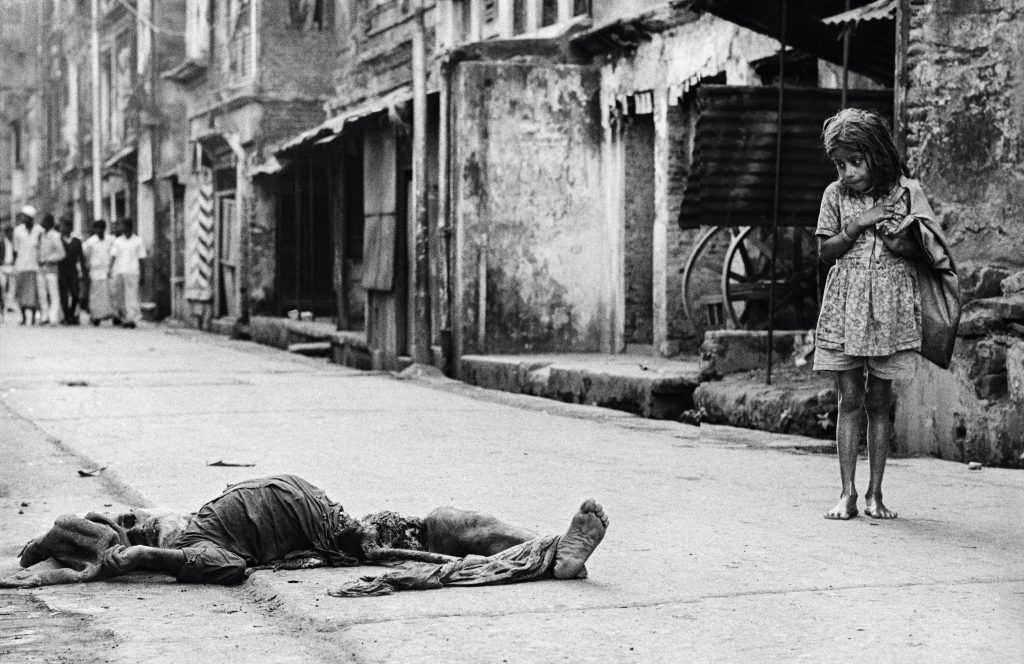 “Once 50,000 people had lived here. Now there were only 200. The rest have fled, leaving the dead on the streets, to the scavenging dogs and the stricken eye of the passer-by.” Photograph/Kishor Parekh. All captions by Kishor Parekh, from the book Bangladesh—A Brutal Birth.

Photo Essays, Credit Lines: A First for India
What’s remarkable is that these tectonic shifts took place over a mere six-year period, between 1961–67, when he worked at The Hindustan Times as the Chief Photographer. Such was his colossal presence that he had a radical impact from the very onset, introducing full-page photo essays and ensuring that photographers are given credit lines. Never before had a photographer so altered the visual landscape of newsprint in India. It was after being inspired by Parekh’s battles that S Paul fought for the same in his publication, The Indian Express. 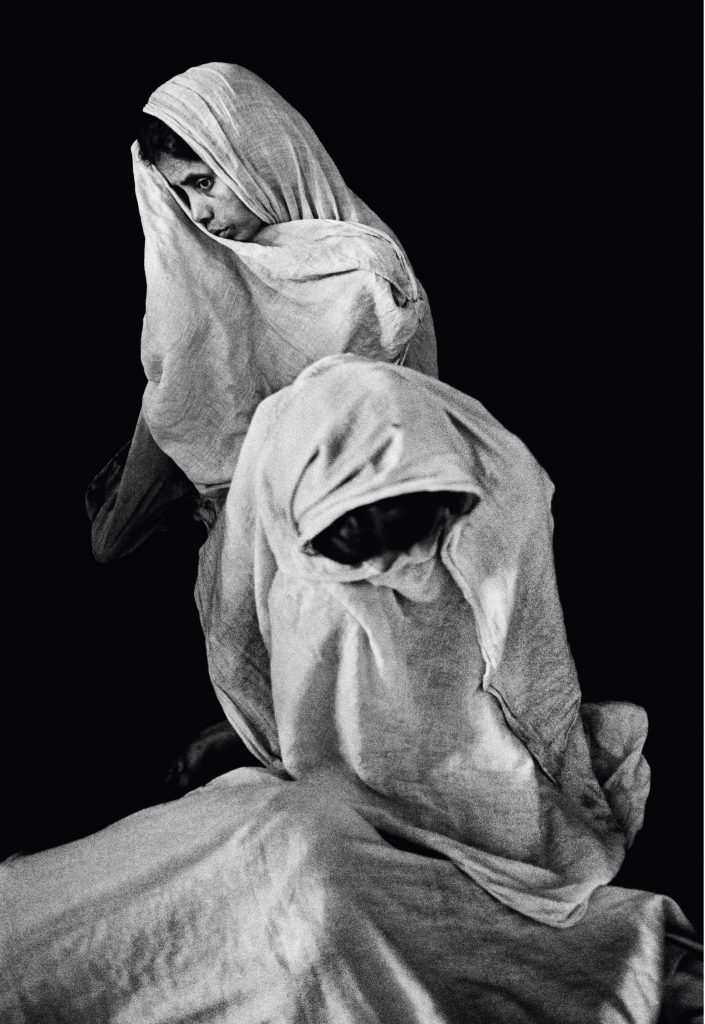 “Widows suffered their private grief, while the statesmen talked and bargained.” Photograph/Kishor Parekh

Parekh and Paul were the two heavyweights of Indian photography in the early 60s, and also inseparable friends.“Greatest photographer, greatest human, greatest friend,” says Paul, reminiscing about Kishor Parekh. “Bahut pyara aadmi tha. Transparent like a sheesha, and honest. Whatever was inside would reflect on the outside. It would show through his eyes. He had eyes that could attract anybody. And those eyes showed that he was a great artist.”

It’s one of the more memorable tales of photo history when Parekh had invited Paul and his brother Raghu Rai to his home. After a few drinks, Paul vomited, leading to Kishor Parekh taking him to a hospital. The next morning, when Parekh went to the hospital, he asked Paul, “Kyun, ladka hua ya ladki?” Inimitably mischievous, he had admitted Paul to a maternity hospital.

It is a similarly playful line that I keep coming back to, while traversing through the various stories around Kishor. “Photo essay is a group effort of all the photographs,” he had once written. The quote, not as poignant as his erudite thoughts on the human condition, but in all its humour, portrays his thoughts on photography—nuanced, direct and no-nonsense.

“If I cannot record the significant deepness of the human race through my camera, what is the use of my medium?”

In 1971, when war broke out between India and Pakistan, Parekh wasn’t an active news photographer in India anymore, having relocated to Hong Kong, as a Picture Editor for a prestigious group of magazines. During a trip to the beach with his wife Saroj, he expressed his restlessness. “My country is burning and here I am, in Hong Kong, painting,” he said.

The following text is an excerpt from the writings of Swapan Parekh on his father’s Bangladesh work:
His insides told him he wanted to be there in his country shooting the breaking story, even though the magazines that he represented were not news-based. Against all odds, on his own initiation, not even letting the emotions for his wife and four kids come in the way, he took the first flight out of Hong Kong. Kishor was not part of any Press troupe nor did he have any accreditation. With a limited stock of Tri-X, he reached the border near Kolkata from the Indian side, borrowing a ride in a friend’s car. Getting off and carrying on by foot, he forced his way through a restricted cordon and actually jumped into an army helicopter carrying an ‘official’ press troupe to Dhaka. 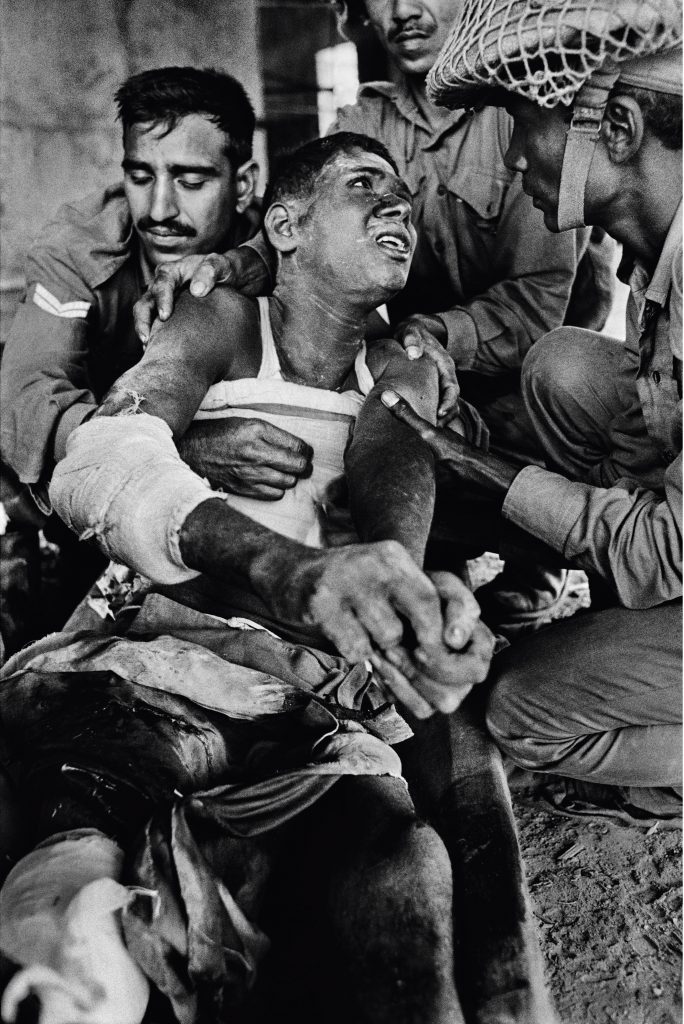 “His young body torn up in several places by a Pakistani shell, a jawan of the Madras regiment is patched up by comrades at a makeshift aid station on the road to Dacca.” Photograph/Kishor Parekh

The Major responsible for the troupe, though aware of Parekh’s repute, refused to leave with him on board as he did not have the mandatory clearances. “Shoot me here right now or take me” was Parekh’s stubborn, gutsy resistance. In the ensuing rebuttal, the Major eventually blinked and caved in to his doggedness. He probably saw purpose in Kishor’s fiery eyes and succumbed into taking him, on the condition that he was noone’s responsibility, once he was in the war zone.

“All I Can Smell is Rotten Flesh…”
Within the ensuing 5–6 days, he created what is now photojournalism history, and that too with a mere fifty rolls of film. The equivalent amount of frames that many photographers of today would probably be running through an afternoon.

With economy of raw stock, coupled with a clarity of vision, Parekh realised he was onto something bigger. Not satisfied with just ‘covering’ the war, he immediately rushed back to Hong Kong and spent Christmas week working day and night in the darkroom, to put together a dummy of his work at lightning speed. 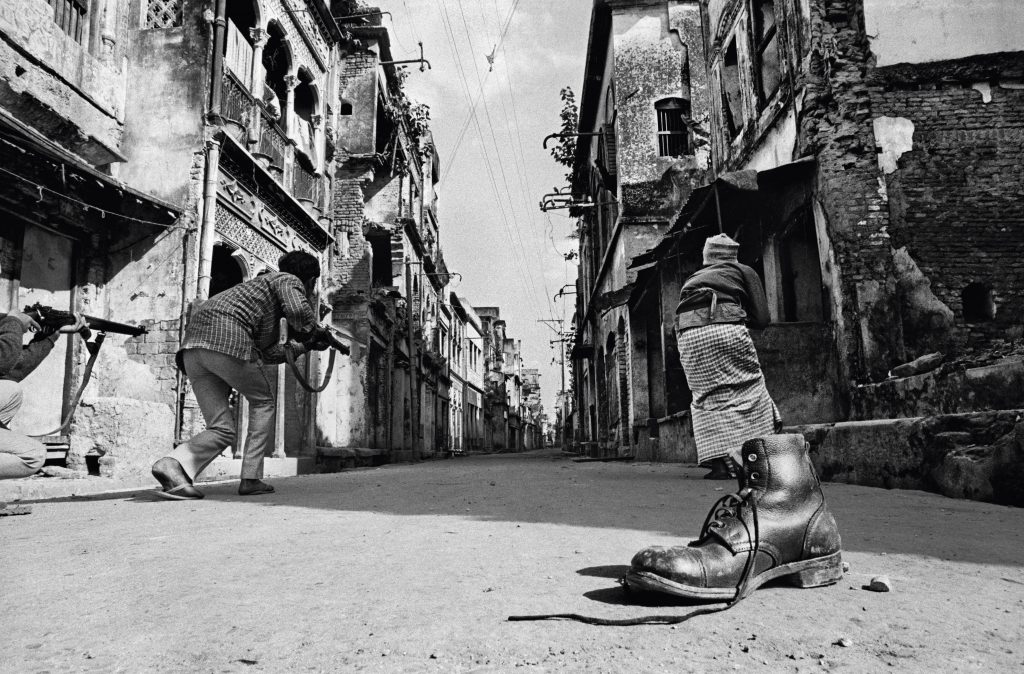 “In a street of horror in the old quarter of the city, I saw Mukti Bahini guerrillas hunting snipers. Entering the houses, the men fought silently in dark rooms.” Photograph/Kishor Parekh

“All I can smell is rotten flesh…” a visibly leaner Kishor exclaimed as he held the dummy, having shed 15 pounds due to a complete loss of appetite from his recent ordeal. But in his hand, he was holding history, and what was the soon-to-be-born book, Bangladesh—A Brutal Birth. He rushed back to India and shared his dummy with the Foreign Secretary’s office. The government, stunned by the powerful images, readily agreed to order the entire print run of 20,000 copies and made it the official document of the war.

Bound in its spine were pictures that have gone on to become icons of Bangladesh’s liberation movement. Pictures that, to date, are spoken of, for not just their photographic finesse but also their extreme emotional content and power to move. The book’s rarity can be gauged by the fact that even Kishor’s family possesses only two copies. The privileged others, who managed to procure a copy, hold on to it like a prized artifact.

In Horror and Beauty, Life and Death
In 1982, Kishor Parekh passed away at the Valley of Flowers, where he was working on what would have been his third book. Legend has it that he exclaimed to a friend the day before his death, that the place they were at was so beautiful that it would be the ideal place to breath one’s last. A man who chronicled the horrors of war, famine and death almost preempted his own… as that massive heart attack battled him, he calmly kept his Nikon F2 on the ground. Much like an ode to the sensitivity with which he told the story of his times, the last photograph in that F2 was a picture of a flower. Live, love, experience. That’s how Kishor lived. And that’s how Kishor died.

The legendary Kishor Parekh’s photographs are currently being exhibited at the Chennai Photo Biennale.

This article originally appeared in the November 2015 issue of Better Photography.