Conchita Fernandes looks at the work of Jane Evelyn Atwood, who uses her photographs to answer questions that only a few of us have ventured to investigate. 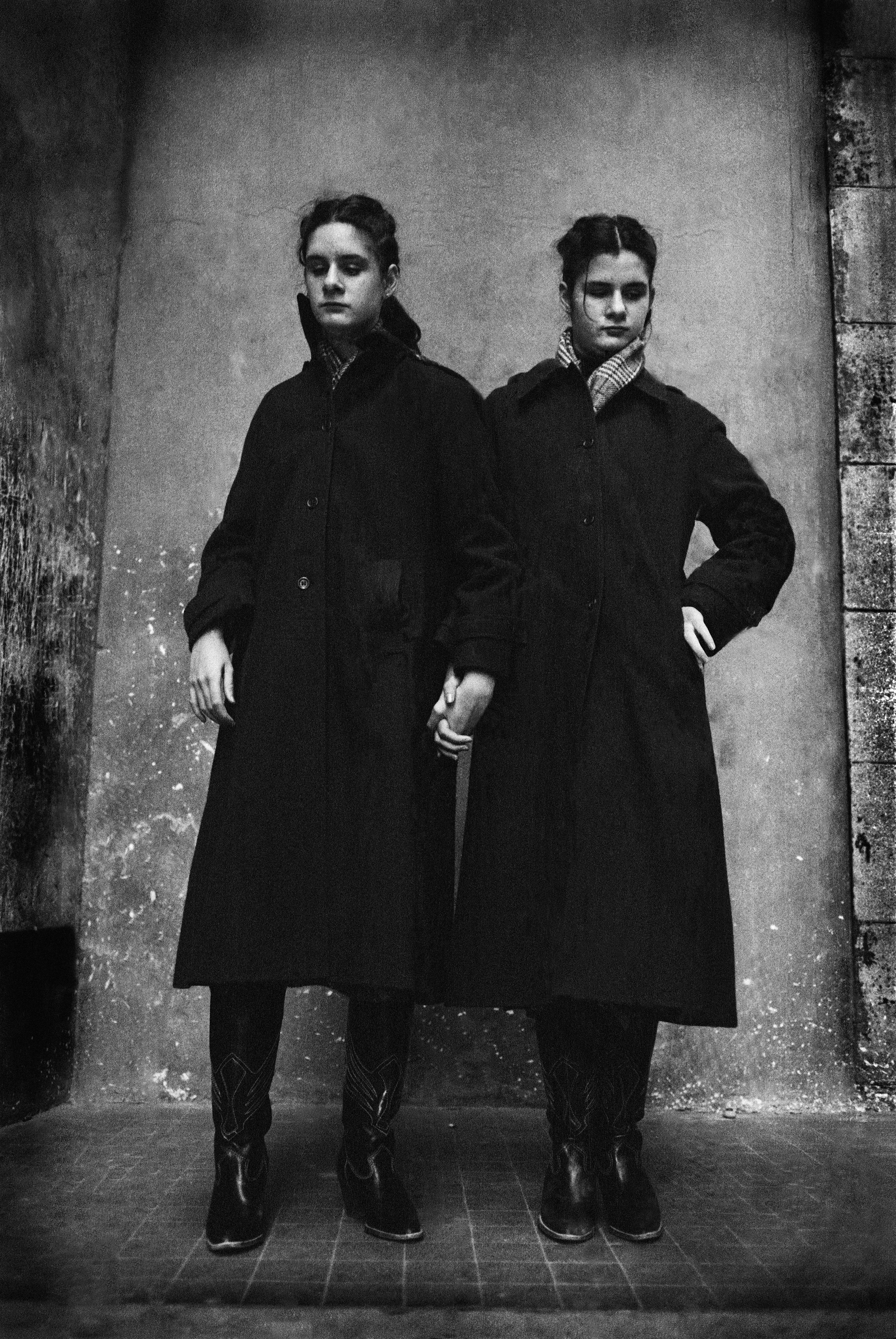 Most of us forget that all photographs, even those that are expected to be objective and accurate in their portrayal, are a visual interpretation of what the photographer saw. That is why we have different stories of similar moments, even of events that have shaped history. But, not all visuals have the capacity to communicate the subject’s personal narrative, because it is often difficult to procure from under the several layers of experience, that are a part of the individual’s or the landscape’s reality. It is a test of patience and commitment that can take months, or years, and sometimes even decades, to arrive at.

Jane Evelyn Atwood has dedicated her entire life to understanding and revealing the stories belonging to those living along the periphery of society. “People and the human condition fascinate me… how we adapt, how we live our lives. I’ve always been interested in those who live apart, or who are different in some crucial way. I want to know how they cope,” she said. Her journey has led her to several intersections, and each time, she uncovered aspects of the subject, that up till then existed only in obscurity. Curiosity drove Jane to pick up the camera. It began when she encountered the prostitutes on the streets of Paris, in the 1970s. “I was 26 years old, terribly naïve, and didn’t even know how to focus my camera. But I had seen the women on the street, dressed like movie queens, whispering at the men who passed. Why did they do it? How did they do it? How were they able to do it? I wanted to know them, and photographing them allowed me to do that,” she said. She befriended Blondine, a prostitute, who became her first ally and her guide into the world that existed at the Rue des Lombards. Jane spent an entire year, never missing a single day, photographing the same women, night after night. The brothel was where she learned to shoot, to recognise and understand the significance of light, to be patient and present, and more importantly, when not to make a picture. “I had to respect this position I was granted. Whatever they gave me was a gift that I was privileged to receive,” she said.

Her involvement with the prostitutes has been described by some to being that of a voyeur and an accomplice. Despite the circumstances and the newness of it all, Jane chose not to photograph these women as beings who belonged to a world separate from ours. She did not exploit their quirks or turn them into specimens to be ogled at. Instead, she embraced a respectful and compassionate approach, enabling us to empathise with them. “I found the prostitutes beautiful and generous. I have never regarded them as objects. I have not felt any contempt, but admiration for them,” she said. 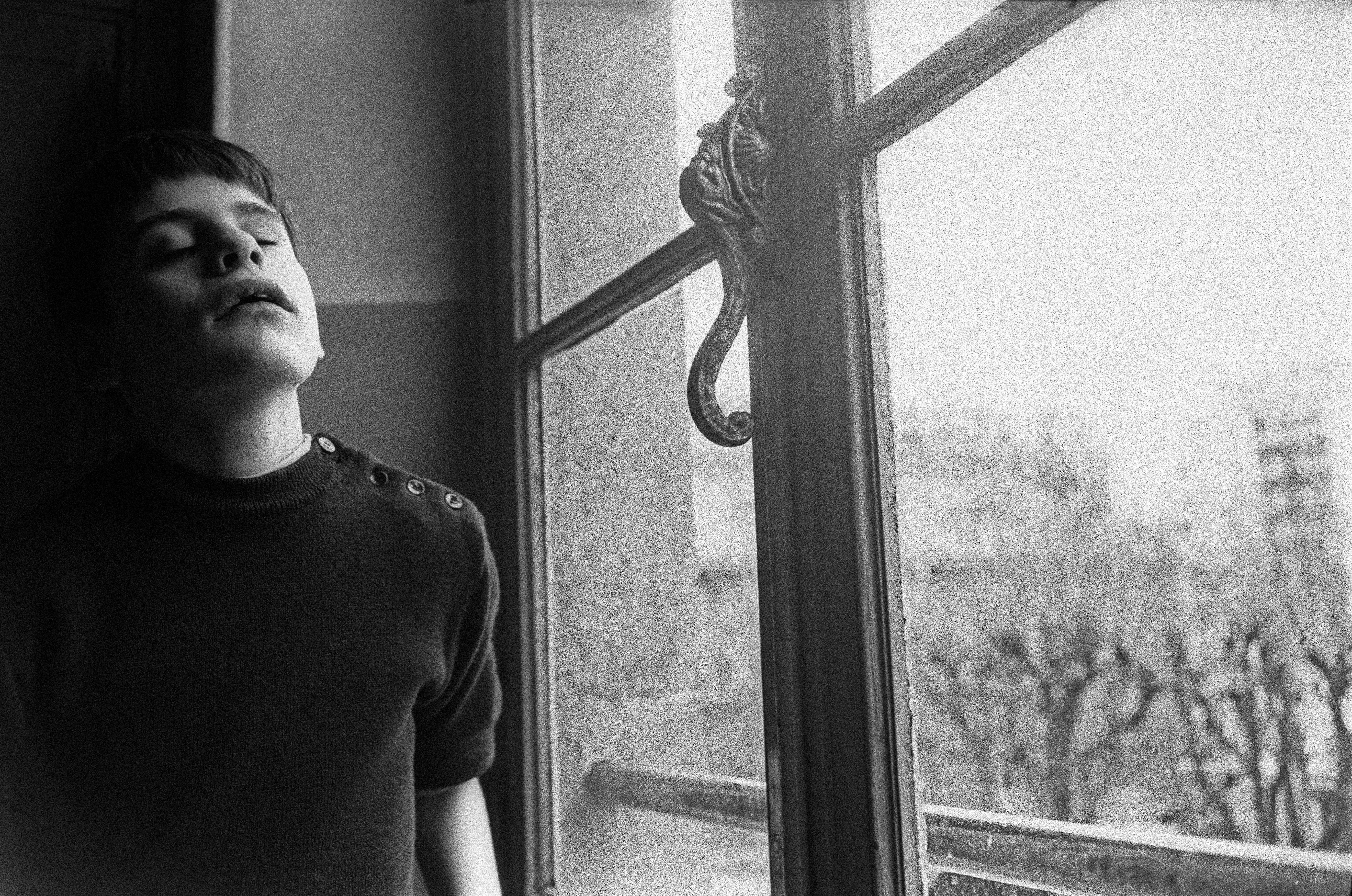 “My vision will be ‘exhausted’ when I have nothing to say—and when that happens, I’ll probably be dead!”

Curiosity would yet again dictate the photographs she made of blind children, over the course of ten years (for which she received the W Eugene Smith Grant for Humanistic Photography, in 1980). “After an incident observing blind men on a bus, I realised how the blind are condemned to live in a world made for the sighted. I was fascinated by the idea of not being able to see, and just what it is, in fact, that blind people do see,” she said. Jane recollects approaching one of the Directors of the school for the blind, attempting to explain the purpose behind her project. He said to her, “Blind people aren’t sad; it’s you who are sad for us.” And then he added, “But if eyes were for sale, I’d pay any price to buy them; I’m dying to know what you see!” And so, her photographs became intimate portraits of the blind children, who seemed suspended between their thoughts and their surroundings. Her camera found grace and elegance, where previously, people had expressed pity, horror and even fear.

Jane mentions Diane Arbus as being her only influence. “I took up photography because of her,” she said. “At first when I saw her pictures, it was not for her photographs. I came to see a woman who had committed suicide… I wanted to see the person who had chosen not to live anymore. That was what intrigued me. However, the people in the photographs never left me.” Arbus too, spent her life photographing the marginalised. But as Jane began to increasingly identify with her, an important advice from Lisette Model, provided some perspective. She said to her, “You know, Diane was a very sick young woman. You don’t need to be sick like her to make the photographs you make.” “This freed me. It was very important for the rest of my life, and for my photographs,” Jane said. 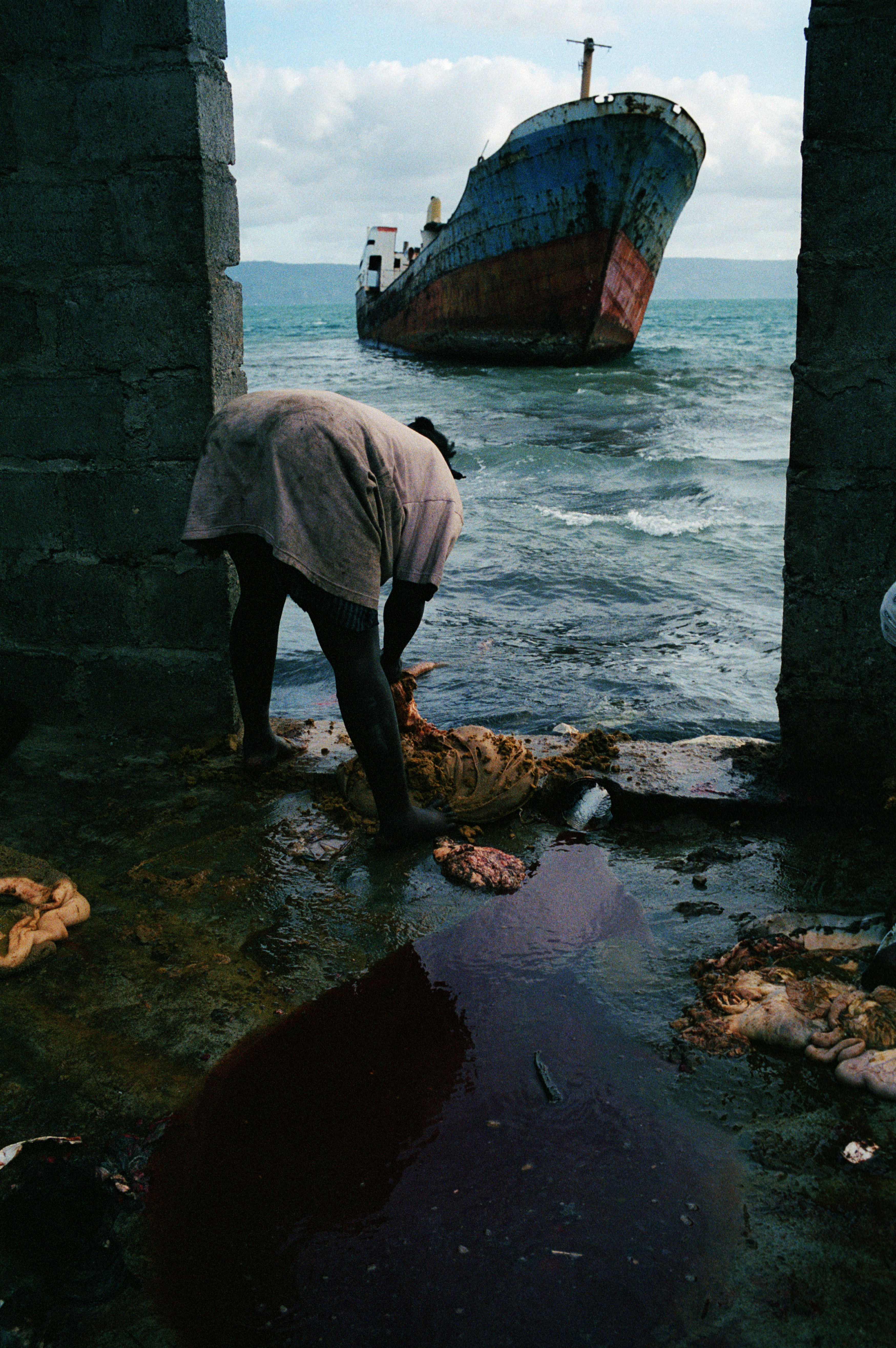 One year after the democratic elections of January, 2006, when Preval becomes President, not much changed in Haiti. Port de Paix, Haiti, April, 2007.

“Sometimes I feel the need to write with my photos. But I don’t exaggerate with words; I don’t use words to add something that I didn’t see. I’m an author, more than a journalist, I express myself with pictures as well as words—but any given story will always only be my take on it.”

Apart from her curiosity, the lack of information was also what enabled Jane to do projects that seemed intimidating and daunting; You are less fearful when you don’t know what to be afraid of. Her photographs of incarcerated women in 40 prisons across the globe, would become her most important project yet. Her pictures swing across two realities of this world—the ‘masculine-like’ environment that the women are placed in, and how it interferes with their physical wellness. By this time, Jane had become more ‘militant’ with her approach. “Contacting prisons all over the world, requesting access, dealing with fragile, needy, or violent inmates, manipulating guards, working with translators, digesting the terrible stories I was privy to and confronting the fear and danger that is omnipresent in most jails and penitentiaries, not to mention, doing good photos and writing…” Her pictures brought to light several ill practices carried out in the prisons… male guards forcefully stripping mentally ill prisoners, visuals of self-mutilation, pregnant women being handcuffed while in labour. The poignant image she made of the latter made a massive difference, and the practice was banned in several countries.

All of Jane’s projects have been the fruits of several years of labour. An involvement of such kind cannot be possible, unless you’re consumed by your work. “The subjects have always chosen me. And when it does, it feels like I’ve been bitten by something. And then comes the obsession. I find myself organising my life around it, so that I can do it,” she said. However, such intentness can sometimes blur the finish line, that is, knowing when to stop. “I know I’m finished when I understand the story from A to Z. At the same time, I do have a tendency to stay just a little too long. Because I’m not sure of myself. Because I’m afraid I don’t have enough. Because I’m sad to leave it! Sometimes I have to withdraw deliberately, force myself to stop,” she said. 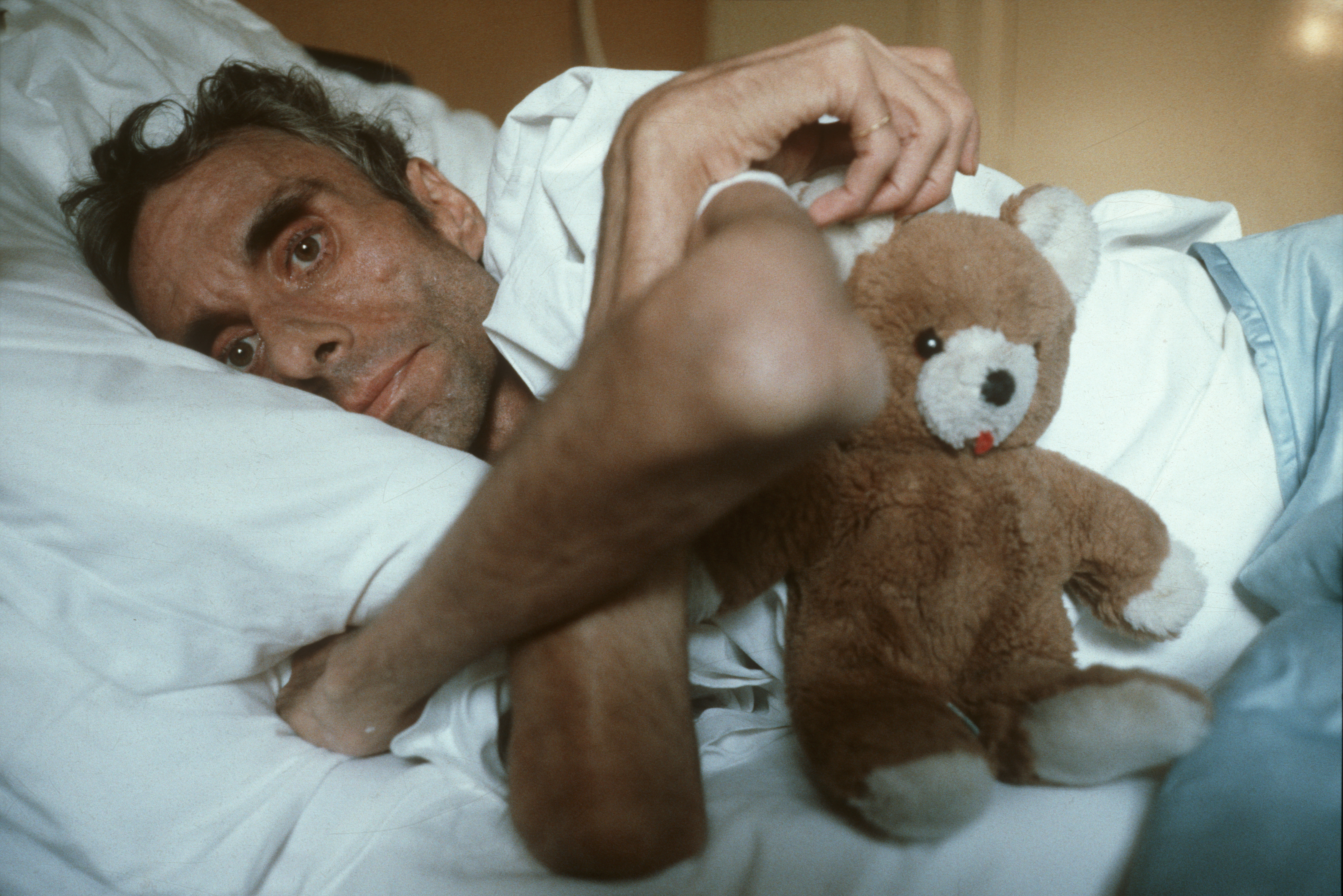 Paris, France, October-November, 1987. Jean-Louis, 43 years old, was the first person in France with AIDS, who accepted to be photographed for publication in the press and elsewhere, in order to inform the public about what AIDS really is. Jane lived with Jean-Louis for the last four and a half months of his life, at home, in his Paris apartment, and then in the hospital where he was eventually admitted, and where he died on November 26, 1987. Photos of his life at the hospital, his deteriorating condition, new treatments, visits, and waiting… The hopital allowed Jane to continue the story if she didn’t reveal the hospital’s name nor photograph the personnel, from Jean-Louis: Living and Dying with AIDS.

“It’s not that photography has had an ‘effect’ on my life. It’s given me a life—a fascinating, stressful, passionate, precarious, travelling life—which fulfills me completely when I’m working on a great story, but plunges me into despair when I’m in limbo, not working, worried about money, angry at how stupid people have become and how superficial and dangerous the world is now.”

At a stage where everyone is fighting against time, Jane’s work urges us against hurrying. It is in patience, in listening and in questioning everything, that she urges us to care deeply for all that matters, her work probing the fact that things are never the same as they seem on the surface. 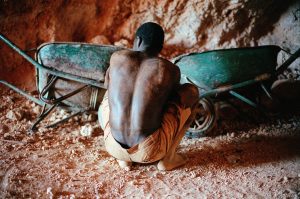 Men work in sand and gravel quarries high in the hills above the town. Port de Paix, Haiti, April, 2007. Daily life in the seaside town of Les Gonaives, devastated by Hurricane Jeanne in September, 2004 and in the poorest country in the world, Haiti. 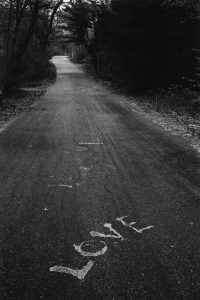 Cape Cod, Massachussetts, U.S.A., 1983. Right: Visiting rights for a married couple jailed for stealing a painting from a museum, Dijon, France, 1991, from Women in Prison. Visiting rights for a married couple jailed for stealing a painting from a museum. Maison d’Arrt de Femmes, Dijon, France, 1991. 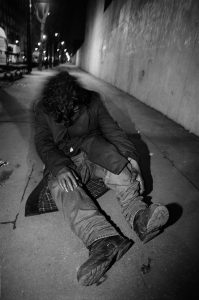 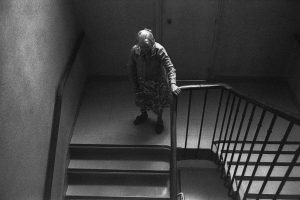 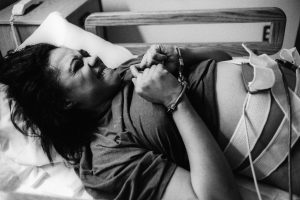 Handcuffed, pregnant inmate writhes in pain during a gynaecological examination, moments before she gave birth by caesarean. Two armed guards were posted outside the open door to her hospital room. Providence City Hospital, Anchorage, Alaska, U.S.A., 1993, from Women in Prison. 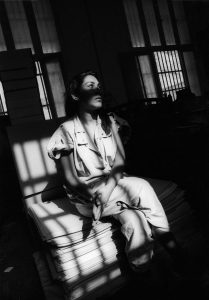 Prisoner in the prison workshop, Marseilles, France, 1991, from Women in Prison. 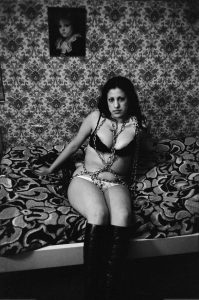 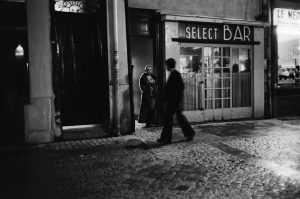