Raj Lalwani discusses the work of Henry Peach Robinson and marvels at how this pictorialist’s thought process influences photography even today.

“It is the photographer’s imperative duty to avoid the mean, the base and the ugly, and to aim to elevate his subject.”

The beauty of tracing the history of photography is in discovering how everything seems to be connected. The life of Henry Peach Robinson has a string of such clues. His work and thoughts define some of the most important concepts in photography today.

Robinson started off as a painter. When he was just 21, his painting was hung at the Royal Academy in London, a remarkable achievement for that time. This was in 1852, the same year he discovered the rather young art form of that time—photography. Maude and Ethel May Robinson (1868) is typical of Henry’s urge to make photos that show the relationships shared by humankind and freeze them with a timeless significance. Photograph/Henry Peach Robinson

Going Beyond the Medium
Because of his background in painting, Robinson was dissatisfied by the apparent limitations of photography. Why did it just have to be about documentation? Did it have to really show what lay in front? Or could it conjure up dreams and magic, the way the imagination of a painter’s hand could? These painterly leanings led him to collaborate with Oscar Gustave Rejlander, a pioneering art photographer who was the first person to combine multiple (32, to be precise) images into one final ‘montaged combination print’. Dawn and Sunset (1885) was one of Robinson’s several pictures to court controversy, because of the depiction of stereotypical gender roles. Photograph/Henry Peach Robinson

However, while Rejlander was the actual pioneer in this case, it was Henry Peach Robinson who recognised the significance of what had just been achieved. The final image was no more dependent on the subject, but was in control of the photographer. One could not just take, but also make an image. Recognising this potential, he went about conceptualising and creating photomontages.

“I must warn you against a too close study of art to the exclusion of nature and the suppression of original thought.”

The Creation of Truth
Robinson’s motive behind using the combination print was largely technical. Until then, it was difficult to include the sky as well as the subject on the same negative. The combination print was an easy fix to that, something similar to the HDR of today. Some of his most famous images, thus, either included a person lying against a skyscape, or a bunch of models in front of a bright window. Fading Away (1858) was criticised because it was considered inappropriate to show death in a medium as literal as photography. But the fact that it was a staged photo perhaps makes the protests a little ironical. Photograph/Henry Peach Robinson

“Man cannot stand too many facts; it is easy to get an overdose of reality, and he wants a little mystification as a relief.”

In fact, almost all his photos were staged. He justified this by saying that he had no qualms about mixing the real and the artificial. His eventual goal was to produce a photograph that looks like a painting, a concept that was, in effect, the birth of pictorial photography. Morning Mist (1893) shows his penchant for subjects that revolved around the pastoral, especially towards his latter years. Photograph/Henry Peach Robinson

What Should Be Shot? And What Shouldn’t?
Needless to say, like most new ideas, Robinson’s craft wasn’t immediately accepted. In fact, the Photographic Society of Scotland greeted the technique with howls of protest, especially as they hadn’t realised that the prints were manipulated. They felt deceived. The most vociferous of them said that this was mere patchwork, certainly not photography… a point at which Robinson decided that he would not divulge the intricacies of his craftmanship in the future, and just let people look at the final picture.

But then, that wasn’t the only controversy he encountered. Robinson’s most famous combination print was an image titled Fading Away. Made in 1858, it depicted a girl dying of tuberculosis and showed the despair of her family members. A lot of people felt that suffering was not an appropriate subject for photography. His critics accused him of “cashing in on the most painful sentiments which it is the lot of human beings to experience.”

Queen Victoria’s husband, Prince Albert disagreed with the criticism, struck by the poignancy of the created moment. He not only bought a copy, but also ordered every composite print Robinson made subsequently. It is interesting how this mirrors in the present world, where photography has been used to document human suffering, but the ethicality of what should be shown, and what shouldn’t, is still debated.

Besides being a pioneer of pictorialism, Robinson was one of the first few to use photography as a fictional narrative, as seen in this staged retelling of Little Red Riding Hood. 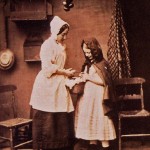 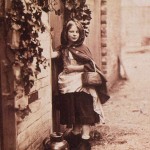 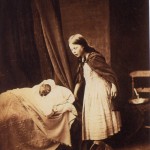 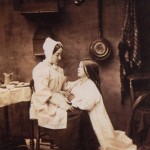 “Men usually see little of what is before their eyes unless they are trained to use them in a special manner.”

On Seeing and the Clash of Art with Craft
While he considered craft extremely vital, Henry Peach Robinson was one of the first to opine that there is more to photography. He wrote extensively on the need to ‘see’. “A new world is open to him who has learnt to distinguish and feel the effect of the beautiful and subtle harmonies that nature presents in all her varied aspects,” he wrote. There were two major camps that rose in the mid 1800s—those who wanted to document, and others who wanted to create. As the division grew sharper, Robinson left the Royal Photographic Society of Great Britain, and formed his own rebel association called the Linked Ring. Interestingly, the Ring was much like a secret society—with each member using a pseudonym at meetings that resembled ceremonies. On whether photos should be altered or not, of course, is a debate that we have even today. When the Day’s Work is Done (1877) is probably his most famous photomontage, comprised of six negatives. Photograph/Henry Peach Robinson

His wife recalled that when they married, she was told in no unequivocal terms that it must be “photography first, wife afterwards!”

Voices Through History
Today, pictorialism as a visual language is often considered old school. But the fact that the godfather of pictorialism was also a storyteller, would deal with issues of discomfort and pain and voice concerns that plague us today, tells us how he, and his style of photography, is still so relevant. One of the first photographers to look at non-visual art forms, Robinson created Sleep (1867) from four wet collodion negatives, inspired by a poem by Matthew Arnold. Photograph/Henry Peach Robinson

Maybe that is telling of the medium of photography itself. The more things change, the more they remain the same. And probably that is the reason why a deep study of the history of picturemaking and a rewind through the lives of these crazily passionate innovators, is so important.