Having lived most of his life in different cities, his Desert series prompted him to ask important questions about how much he knew about the environment and the impact he has had on it. Photograph/David Zimmerman

When you are a risk taker, the adventure never ceases. David Zimmerman discusses a roller coaster ride called life with Conchita Fernandes. Whether it is his iconic ad campaigns or landscape photos of at-risk areas, or even his intimate portraits, David Zimmerman makes you think. You begin questioning what you are looking at. This, in turn, creates a trail of curiosities. I, too, set out on this trail with him and I must say it was an incredible journey.

On the Move
From an early age, David knew that he was destined to work in a creative field. The prospect of studying business in college did not settle well with him. He quit his course and embarked on a life changing adventure that took him through Europe and the Middle East. “It was important for me to see another part of the world, other than what I was born and raised with.” Equipped with only an Instamatic camera, his photographs became a reaction to what he saw and felt. This was also an introspective time where he discovered his true voice. “I was never a conversationalist, and so I felt that photography fulfilled my need to communicate.”

Unfortunately, not all adventures go on forever. He ran out of money and was forced to return to the United States. This time around though, he had a purpose— photography. Except, he did not know how to proceed in this direction. “At this point I decided to enrol myself in an art school in California.” He studied photography there for four years.

“My parents were both graduates who worked in professional fields. They felt that a college degree was the only way to be successful. What they did not realise is that their world wasn’t the only one.”

Taking the Leap
Eventually, he drove across the country to New York, to be among the most creative minds of the country. The first 10 years were hard. “I was fortunate to be surrounded with positive people. Their support took the place of money and food and made the entire experience bearable.” Soon, his life would take a positive turn.

The term ‘regular’ has never featured in David’s vocabulary. He has never followed the traditional order of life. His continual experimentation and exploration with photos and equipment brought him to the attention of some of the bigger companies. Then, the barrage of offers from Pepsi, Coca-Cola and Mercedes Benz arrived. The projects tested his creative skills and the results were spectacular looking campaigns that he became synonymous for.

But life got comfortable, and that was something he could never get used to. With the onslaught of commercial projects, his personal work suffered. “I had to pick a direction.” So far, everything he had done in his life was a huge gamble, and he decided to jump into another one. His photographs of the environment are not just breathtaking, but deeply personal as well. They make us question our life’s choices and weigh the consequences of our actions. Photograph/David Zimmerman

A New Chapter
In 2001, he began to make regular trips to India. It was his way of slowly detaching himself from his commercial work. “It was a sort of epiphany when I started doing my personal work again. I no longer had to think about what somebody else wanted to see in my picture. In fact, it came back in full circle to where I had started at the age of 19, with the exception that now I had a big studio.”

“Before moving to New York, I was completely broke. I still drove across the country, because at that point, it did not really matter where I was.”

The Pursuit of Understanding
As inspiring as his life story is, I was also intrigued to know more about his vision and his approach to photography. A lot of David’s work has social and environmental undercurrents. “When I photograph landscapes, in many ways, I talk about people and how they have impacted it or vice versa.” He immerses himself in understanding nature and the power that it has in the natural world. He would set off to the desert for days at a time and expose himself to the best and worst elements of nature. It was scary, but to absorb the fear and uncertainties of being in the natural world completely defenceless, was riveting.

While most photographers are on the constant pursuit of recognition, David pursues understanding. He is not content with just uncovering the superficial layer of the issue. He prefers going deeper and eventually probing the subject when the time is right. Whether they are the portraits of the victims of the 2010 British Petroleum oil spill in the Gulf of Mexico or the exiled Tibetans, his images reflect his compassion and humanity. “My whole life has been about leaving comfortable zones.”

“I want to make photography accessible to those who possess the talent but not the means to learn it.”

The best part yet, is that he still embodies the zeal and rigour of his 18-year-old self and is not afraid of the unknown. David has recently purchased a Royal Enfield. I can only imagine the places it is going to take him. In fact, it is another chapter of his adventure waiting to be written. 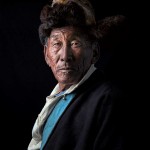 David has collaborated with several Tibetans to preserve the legacy of their culture. He has even set up the Himalayan Art Center in Dharamsala to provide interested individuals the opportunity to learn photography, for free. Photograph/David Zimmerman 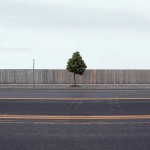 In Barriers, David has explored corporate, social and political boundaries, and the limits and obstacles that they represent. Photograph/David Zimmerman 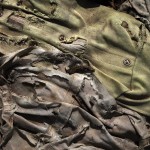 While camping out with a group of off-the-grid people, he first stumbled upon an odd pile of battered clothing. He later realised that it was part of the roof of a family’s home. The clothes insulated them from the cold nights. Photograph/David Zimmerman 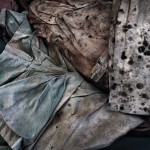 When the government takes away your car and your home, all you have are the clothes on your body. In Last Refuge, David has evocatively captured this last dangling thread, that we as humans desperately hang on to. Photograph/David Zimmerman 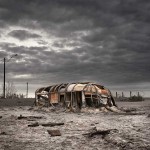 In a career spanning nearly four decades, David has spent a lot of time on the road. He mostly travels along the American west coast, which has not seen as much development as the east coast of the country. These trips allow him to gauge the changing topography of the landscape and its resulting remnants. Photograph/David Zimmerman 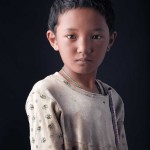 He mentions that when taking such intimate portraits of people, it is important to familiarise yourself to the extent that your subject knows that you are not there to take anything away from them. Photograph/David Zimmerman 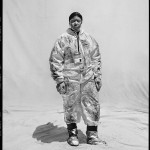 Wanting to photograph the Louisiana landscape after an oil spill, David faced threats, arrest, but did not stop pursuing the issue. Photograph/David Zimmerman