Circling Barracuda school, Papua New Guinea: David is masterful at capturing moments like these in the dynamic seas where activity changes every minute. Photograph/David Doubilet

Raj Lalwani takes a peek under the seas, to explore the magical world of underwater maestro David Doubilet.

“There are a million reasons why we should save a shark, but the bottom line is because it is beautiful.” — David Doubilet on assignment

Conversations with master photographers are often enlightening. What stayed with me long after talking to legendary underwater photographer David Doubilet, was when he spoke about his role as a photographer: “Whenever someone asks me what I do, I tell them that my job is to astound people. They ask me if I’m a magician. I just smile and say that I’m a photographer!”
This world of 62-year-old David Doubilet is indeed magical. Under the deep waters of the world, there are so many varied landscapes, creatures, forms and colours. It is ironic that while water covers a majority of the earth’s surface, it is the least explored part of our planet. David has been responsible for visually representing this beautiful, blue expanse since almost four decades now. Having worked on over 60 photo stories for National Geographic since 1971, he is probably the most influential and innovative underwater storyteller of our times. Weedy Sea Dragon, Tasmania, Australia: His photographs combine the drama and character of unique creatures in a beautiful world of light and colour. Photograph/ David Doubilet

The Making of a Master
David started diving when he was only 10 years old. By the time he was 12, he knew that he wanted to make pictures below the sea. So he improvised an underwater setup—by wrapping a Brownie Hawkeye camera in an anesthesiologist’s rubber bag that he took from his father’s hospital. “The first pictures were terrible,” David recalls, “After all, what would you expect? However, the idea of being underwater was a great escape, like a passport to a whole new world.” Being a good diver is an integral part of being an underwater photographer. But that is, of course, not enough. When David had joined National Geographic, Robert Gilka the Director of Photography, said, “Anyone can be a great underwater photographer. We merely have to teach them to dive.”
As David produced image after image, Gilka admitted that he was wrong.
According to David, an underwater photographer must have a diver’s spirit and a photographer’s eye. A diver understands the visual literature of the sea, and your photography skills must tell a unique tale of light, shadow, colour and emotion. David says, “It may be a Leafy Sea Dragon in South Australia or Great White Sharks in South Africa. But unless they are moving through an interesting complex world full of light, the pictures will not work.”
The past four decades of his life have seen him exchange frequent pleasantries with deadly Sand Tiger Sharks, huge whales and ancient wrecks. David has shot a few commercial campaigns above the surface of water too; but his heart lies in the seas. He wittily remarks, “When my friends get married and want me to shoot their weddings, I tell them to ask someone else. A shark is a lot less dangerous than an angry mother-in-law who wants you to shoot her in a particular way!”

Spirituality in the Seas
While marvelling at his dramatic wizardry in creating a surreal world underwater, you are bound to wonder about the thought process behind the photographs. How does it feel just before diving into the waters, surrounded by poisonous jellyfish and dangerous sharks? David pauses for a while before he answers, “There is a Zen-like quality to it.”
For David, each dive is a brand new voyage of discovery. The weightlessness that one feels underwater gives it a dreamlike quality. “It is not just the mindboggling things that you see; it is also a unique freedom from gravity. You get knocked around here and there; you end up going in a direction you did not intend to. Every single time, I wear my mask and gear, take a couple of deep breaths… that is when I have this spiritual high, and then I’m gone!”
While talking to him, I realised that it is this spiritual outlook that shines through in each of David’s photographs. What differentiates his images from others is that they have been taken by someone who understands the sea, appreciates it and never exploits it. All for Beauty
Besides having authored and photographed several books for the cause of marine conservation, he is the founding member of the International League of Conservation Photographers. Having actively used photography as a means of research, education and change, his opinions and beliefs have a touch of romance. “There are a million scientific reasons why we should save a shark or a coral reef, and they are all real reasons. But ultimately, the bottom line is because they are beautiful. That is the most important reason,” he says. David says that a beautiful image will always help the cause of conservation more. “If people find your pictures attractive, they will know what kind of beauty they will miss.”
When I asked him about his efforts to conserve the oceans, he said, “Photography is the most important means to make people aware of how fragile and vitally important our oceans are. For instance, the only reason why there are still a few sharks left in the sea is because people see pictures of sharks, and learn to appreciate them.”

The Voyage Continues
David says that it is unfortunate that each journey into the sea has a sense of doom, due to the manner in which humans have depleted and destroyed the oceans. That said, his voyage and efforts towards conservation continue with the same amount of zest and fascination. “I have seen a one-day old baby Humpback Whale playing on the tip of its mother’s nose. I have also been outside a cage with a very hungry Great White Shark, and had my palms tickled by a sea lion’s whiskers,” he says. There cannot be a more effective sum up of the beauty and poignancy of the magical world of David Doubilet.

You can take a look at more of David’s extraordinary underwater photography at www.daviddoubilet.com 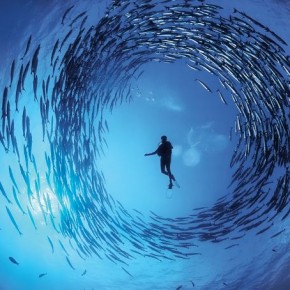 Circling Barracuda school, Papua New Guinea: David is masterful at capturing moments like these in the dynamic seas where activity changes every minute. Photograph/David Doubilet 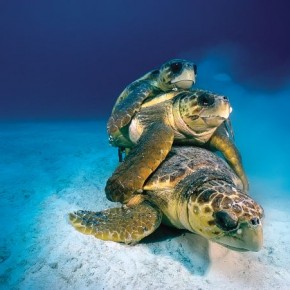 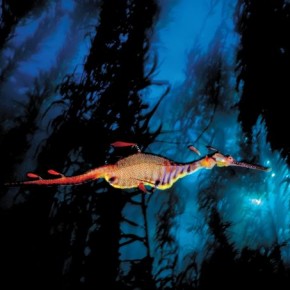 Weedy Sea Dragon, Tasmania, Australia: His photographs combine the drama and character of unique creatures in a beautiful world of light and colour. Photograph/ David Doubilet

Great White Shark, Gansbaai, South Africa: This photograph can only give us an idea of David’s interaction with dangerous subjects and the manner in which he must be shooting them. Photograph/David Doubilet 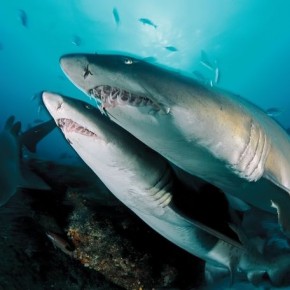 Ragg ed Tooth Shark, Al iwal, South Africa: His underwater imagery makes it seem as if the oceans accept him as one of their own. Photograph/ David Doubilet