A small herd of Camargue horses race across the waters of the Rhone estuary in France.Photograph/Art Wolfe

Like the soul is to the body, so is art to Art Wolfe. Neha Mutreja speaks to this artist to find out what keeps him on his toes, even at the age of 59.

While flipping through the leaves of an international magazine, I was transported to the world captured by Art Wolfe—a photographer who has dedicated three decades of his life to capturing the wonders of the world. But that alone is not what he does, as I discovered while studying his magnificent photographs. For Art, photography serves a greater purpose. It is a medium to interpret and record the world’s fastest disappearing vistas and wildlife.

Evolving Artist Turned Photographer
Born to middle class, self-employed parents, Art was never averse to the idea of being an entrepreneur. While in college, when he was pursuing studies in fine art, he took up photography to document his trekking and climbing trips and got hooked on to the medium. He says, “Inevitably, the allegiance from painting started shifting to photography. I found that photography was far easier for me, especially to create original compositions at a faster speed. It is a medium that suited my temperament—I am not hyper, but I am active…”

Realising and Overcoming Fears
Art attributes his initial success to something quite unusual—his challenge to appear confident. During his college years, he realised that he was always at a loss for words when he had to speak to people. After graduating, he took up a teaching job. It was here that he found himself overcoming his fears. “When you have a class of high school kids, you have to take control or die. If I acted confidently, they would pay attention. If I was quivering, they would eat me alive,” he says. This experience helped him a few years later. He was prospecting for photography assignments at National Geographic. He was able to look into their eyes and tell them, “I can do this.” He elaborates, “I learned to become a good communicator. This is one quality that many photographers and artists lack. I met and dealt with my biggest fear and that gave me a leg up!”

An Artistic Bent of Mind
While his confidence helped him get opportunities, inspiration and effort helped him build a strong photographic base. He gains inspiration from renowned photographer Ernst Haas and Dr Allan W Lobb, a famous doctor and art lover. His images have a certain harmony in terms of how he interprets compositions. He says “I often draw upon natural patterns, elements of design like shapes, textures and lines. This applies to all kinds of photography I do—whether I am shooting wildlife or even an intimate landscape photograph.”

Striving to Create Awareness
Art’s urge to explore and push limits drives him to add his slant to everything he does. For the past three years, he has been doing a television show called Travels to the Edge with Art Wolfe, which airs in the United States. Through this show, he endeavours to reach out to people, educate and uplift them through knowledge. “Through images, moving or still, we can communicate nearly all the details of a place, except smell… I want to communicate what is important through photography. I like to remind people that the globe still has a lot of great places that are worth fighting for,” he says.

Learning From Struggles
Art believes that “all the struggles and all the missteps that one makes, burn into you. It is all a part of process that helps you become strong.” He also believes that one should be focused on working towards their passion rather than getting boggled by the amount of money one canearn. He says, “People try to measure their success from a commercial point of view. That is not, nor should it be, a measure of success. Your measure of success should be personal happiness. Are you happy going out and shooting? If that is the case, then you are successful.” Hours of effort and a single-minded approach towards his subjects is what helps Art accomplish what he has done. Even after working on different activities at a time—like writing over 60 books, doing a television show and supporting a fullfledged office staff—his spirits remain high. In fact, it is this enthusiasm to get up every day and add a personal touch to a clichéd subject that keeps Art Wolfe going. 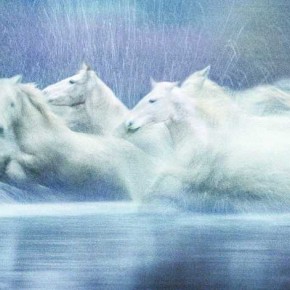 A small herd of Camargue horses race across the waters of the Rhone estuary in France.Photograph/Art Wolfe 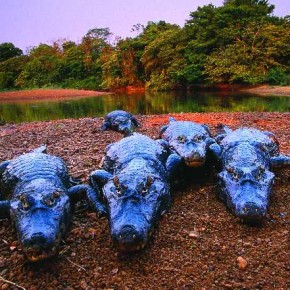 In the wetlands of Brazil’s Pantanal, caimans (a crocodilian reptile found mostly in Central and South America) approach for a treat from local ranch hands. Photograph/Art Wolfe 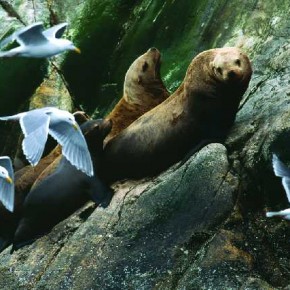 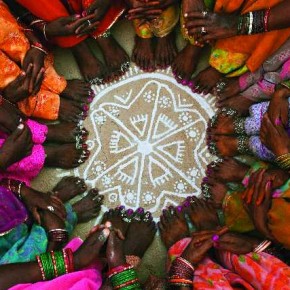 Even as they go about their daily work, the women of India’s Thar Desert wear beautiful jewellery and dress up in colourful clothes. Photograph/Art Wolfe 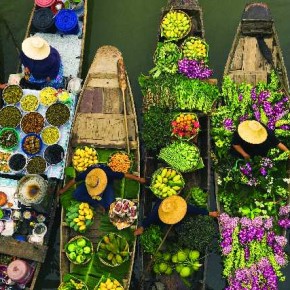 Thai vendors draw their boats together to exchange a colourful, tasty array of goods in Bangkok. Photograph/Art Wolfe 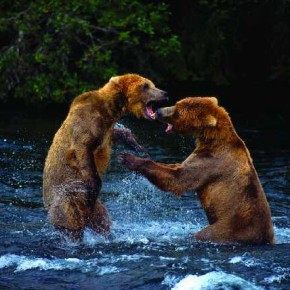 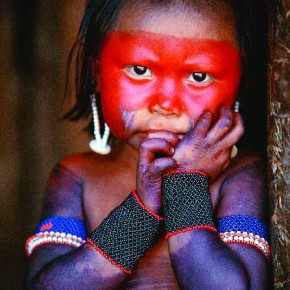 A Kayapo girl shyly stares from her doorway in Brazil. Her face is painted with carmine urucu dye, a pigment obtained from carminic acid. Photograph/Art Wolfe 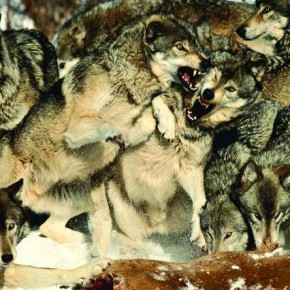 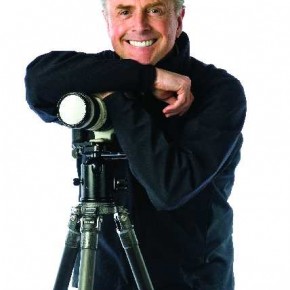 A portrait of Art Wolfe