Kabul, 2003: Afghan war widows are seen walking in a queue to get their monthly rations. Photograph/Arko Datta, Reuters

Supriya Joshi speaks with award-winning photojournalist Arko Datta about his many adventures on the field.

His journey began with a simple box camera. Arko was only eight when his mother gave him one for his birthday. “Each month, I was given a roll of film which contained only 12 exposures. That was my quota. If I spent all 12 frames, I would get another roll only in the next month,” says Arko, the veteran photojournalist. “I was fascinated with that toy. I loved it. I would hang it around my neck and go around shooting anything!” And this is how Arko Datta, one of India’s renowned photojournalists, began his tryst with photography. Arko has always had a long association with the world of photojournalism. He won a number of awards, one of them being the World Press Photo of the Year in 2005 for his stark image of the aftermath of the tsunami that had hit Southern India in 2004. Yet, he remains humble and grounded, as I found out in a free-flowing conversation with the great master.

Young Love
Once Arko received his camera, his interest in the art of photography kept increasing at a steady rate. “I made my first prints at home with some chemicals and a table lamp. It was magical to see images forming before my own eyes. Needless to say, my mother was not very happy about the mess I created!” he laughs. “I became my school magazine’s photo editor and would shoot all the cricket matches played there. I received my first SLR, the Zenit, and it is from there that my passion for photography grew,” he says. Arko’s first published photograph appeared in the national newspaper Hindustan Times when he was 13 years old. “I received a cheque from the newspaper which I still have not encashed. I love revisiting the pictures I took as a youngster—they remind me of the fresh perspective of the world I saw from my 12-year-old eyes,” he says.

The InternYears
Arko has fond memories of his first job. He started off as an intern with The Indian Express, a national daily, in 1991. He would be given a lot of local assignments, and he enjoyed every one of them. He remembers, “I would work in the newsroom till the early hours of the morning, developing pictures. There were no mobile phones those days. So if there was any breaking news, whoever was available at the earliest, would go to cover it. Since I would be around so late in the night I usually went on these assignments. In this way, I got a chance to photograph a lot of exclusives apart from the general work I did.” From then onwards, Arko became deeply involved in the aesthetics and art of photojournalism. For him, this field became very addictive. “Photojournalism is extremely thrilling because every day is different,” he says, and since then he has travelled far and wide, worked with several agencies, all for the love of capturing life as it is.

On the Field
After joining the global news agency Reuters in 2001, Arko visited a lot of grief-stricken areas during his assignments. On seeing such pictures, one often wonders how a photojournalist deals with his emotions. “The first thing a photojournalist must keep in mind is that he must be a professional and keep himself emotionally detached,” he advises. Personally, if Arko gets himself too involved in a situation, he finds it very difficult to shoot. Over the years, however, maintaining an emotional distance became difficult for Arko. “I used to feel that my camera was a wall between me and what I was photographing. But gradually the wall started breaking and I started feeling vulnerable. It reached a point where I began to feel what the other person was feeling,” he says. “There is something about crying men that touches me deeply. There had been a fire in a school in Kumarakom (in Kerala) and several children had passed away. During a child’s burial, I saw his father looking at the sky and dropping chocolates in the grave. I made my photographs, but I could not take it anymore. I went close to the man and patted him on his back to offer my condolence and also to give vent to my own emotions.”

A Lucky Escape
What kind of a role does luck play in a photojournalist’s life? Arko narrates a story to exemplify. He was at the Mashkoh valley (Kashmir), and it was his final day on assignment covering a conflict there, which had ended the day before. “There had been heavy shelling. I was apprehensive about going there, but my driver said that the area was fine. When we finally reached Mashkoh valley, there was no one there. All I could see was a single truck, and I told the driver to park the car to the right of the truck. “I was getting down from the car when all of a sudden I heard this huge explosion right behind me. A shell had landed behind the truck and shrapnel flew everywhere. A shell’s killing range is about 100 feet, but this one was 30 feet away from me. What saved me was that truck, which took the majority of the shrapnel. If we had parked on the left, I would not have been here. As it turns out, saying ‘gaadi ko right mein laga do’ (park the car to the right) happens to the be the most important line of my life.”

What Lies Ahead
At this point, Arko focuses mostly on personal assignments. He also heads and teaches at the Udaan School of Photography in Mumbai along with other photographers like Dhiraj Singh, Atul Loke and Bharat Bhirangi. Between hearing stories about shooting various wars around the world, to near-death experiences, I did not realise where the time went by. As I concluded my interview, I asked him what he would like his legacy to be. “Legacy?” he laughs, “I think I am too young to leave a legacy! However, on an individual level, I want to be remembered as an honest photographer, whose work made a difference, even if it was to one person. On a professional level, I hope I inspire the younger generation to take up photojournalism and do it to the best of their ability.” Of all his pictures, Arko is perhaps remembered most for his World Press Photo of the Year 2005 of a woman crying in agony after finding her relative’s body post the 2004 Indian tsunami. “There were clusters of people collecting at the shore waiting in anticipation to find their lost relatives. Sometime later, a woman’s body was being brought to the shore, and one woman recognised her as her family member. Upon seeing her, she immediately broke down. I was there for about five minutes photographing, and kept reminding myself that I was doing my job to keep my sanity and keep me away from depression.” Five years later, Arko visited the tsunami-hit area again to find the woman in this picture. When he reached the village, he found that his picture had made the woman really popular, and everyone was able to pinpoint her location. “It was a joyous reunion—we were both excited to see each other. In fact, she had a cut-out of the image I took of hers along with my own photograph. It was a humbling experience,” he says. This image went on to become a postage stamp in Europe in 2005. Photograph/Arko Datta, Reuters 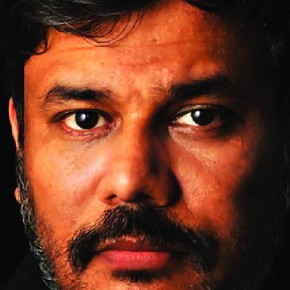 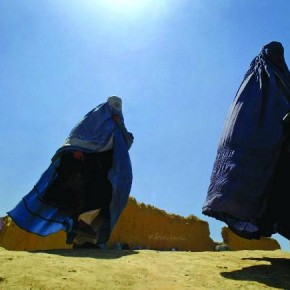 Kabul, 2003: Afghan war widows are seen walking in a queue to get their monthly rations. Photograph/Arko Datta, Reuters 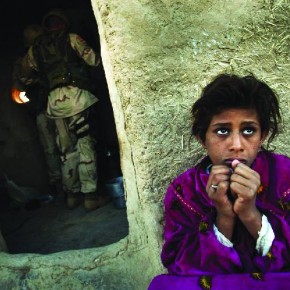 Iraq, 2003: An Iraqi girl reacts as US soldiers search her house during a joint raid with the Iraqi police. Seven persons were arrested during the raid. Photograph/Arko Datta, Reuters 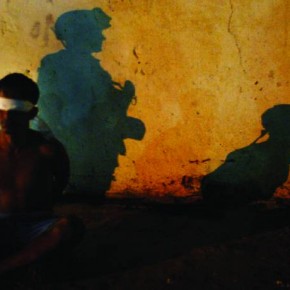 Baghdad, 2003: This photograph was shot when the US army used to conduct raids almost every night for suspected Saddam Hussein loyalists. No fl ashes were allowed for photographers. Here, the shadows of a US soldier and detainee are cast on a wall after a raid. Photograph/Arko Datta, Reuters 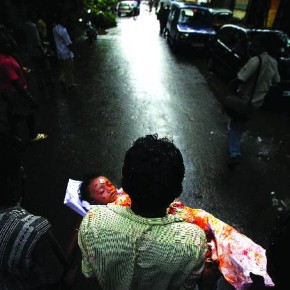 Mumbai, 2005: Several people, including seven children were killed in a stampede after rumours spread about a lake bursting its bank. Here, a man is seen carrying the body of his three-year-old nephew. Photograph/Arko Datta, Reuters 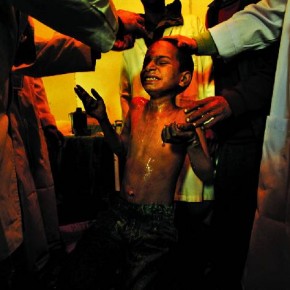 Kashmir, 2005: A Kashmiri boy receives treatment after he was injured in the 2005 earthquake. His screams of ‘chacha, chacha’ pierced the room and made Arko realise the pain he was in. Photograph/Arko Datta, Reuters 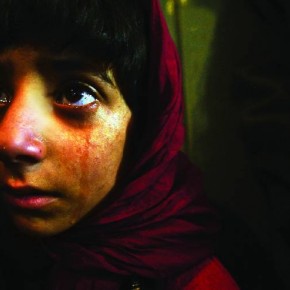 Kashmir, 2005: A Kashmiri girl cries as she receives treatment at a hospital near the Line of Control (LOC). She was injured in the South Asia earthquake. Photograph/Arko Datta, Reuters 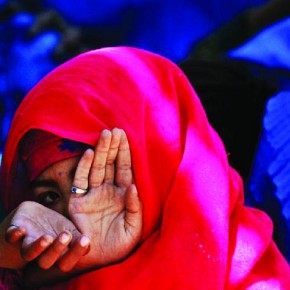 Near Kabul, 2003: This photograph of a girl shying away from the camera was made at a refugee camp. Photograph/Arko Datta, Reuters 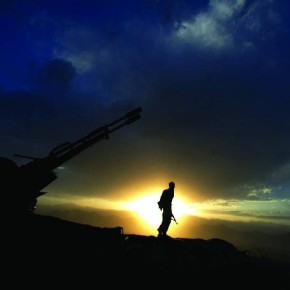 Afghanistan, 2003: In this photograph, a soldier is seen standing with his gun, on top of an army tank. Photograph/Arko Datta, Reuters