Through a curated set of photographs, Conchita Fernandes retraces the transformation of Calcutta as the capital of British India, to the bustling metropolis that it is today.

There was an ounce of uncertainty while stepping into the pages of Calcutta Then, Kolkata Now; that my first experience of the city would be purely through the frame of a book. The uncertainty was largely owing to past experiences of observing such books, ones that claimed to provide a nuanced documentation of the length and breadth of a place, but fell short on this promise. As Joan Didion had said, “A place belongs forever to whoever claims it hardest, remembers it most obsessively, wrenches it from itself, shapes it, renders it, loves it so radically that he remakes it in his own image.” Sifting through the book, I understood what she meant.

Calcutta Then, Kolkata Now is the fifth in the ‘Then and Now’ series by Roli Books, and was launched last year, in October.The distinctness of the series comes from the fact that the books have two different covers, one on either end, reflecting on the city’s colonial past to its present-day metropolis status, both culminating at a midpoint, within the book. I loved the format as it allowed me to enter the book from either point—past or present. I chose the traditional route and began with the city’s rich history. 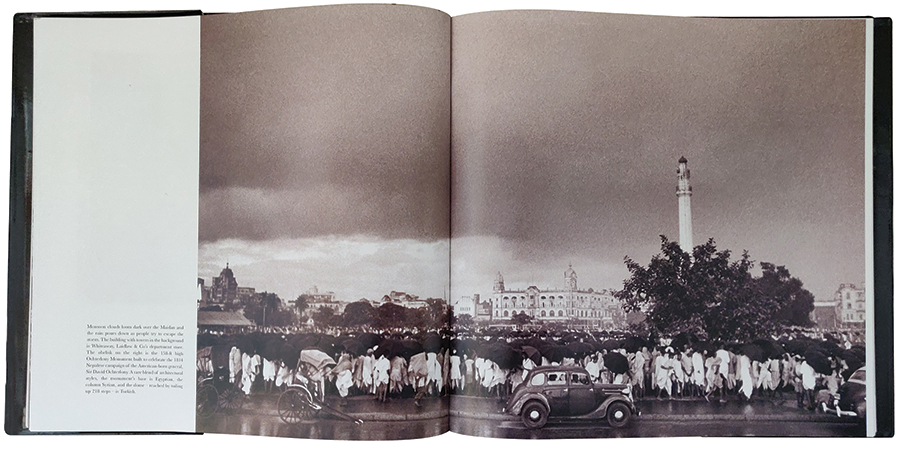 Monsoon clouds loom dark over the Maidan, and the rain pours down, as people try to escape the storm. The building with towers in the background is Whiteaway, Laidlaw & Co’s department store. The obelisk on the right is the 158-ft high Ochterlony Monument, built to celebrate the 1814 Nepalese campaign of the American-born general, Sir David Ochterlony. A rare blend of architectural styles, the monument’s base is Egyptian, the column Syrian, and the dome—reached by toiling up 218 steps—is Turkish.

On opening the book, there’s a beautiful and detailed hand-drawn map of the ‘City and Environs of Calcutta’ in 1832. Turn the pages, and there is a gatefold, along with a note from Pramod Kapoor, the Founder and Publisher of Roli Books. Kapoor visited 40 of the old families (former zamindars and maharajas, amongst others) residing in the city, to procure the historical images. The gatefolds open up
to an expansive kaleidoscopic panorama of Chowringhee (shot by Josiah Rowe, a surveyor, in 1859), and a description of its emergence. Turn the page once more and you are met with a brief history lesson on Calcutta, written by Sunanda K. Datta-Ray, former Editor of Statesman. Here, he delves into the social, cultural, political and economic factors that led to the emergence of the city as one of the vital ports in British India.

From then on, the book transforms into a historical visual feast. Image after image, procured from sources such as the Ambarish Singh Roy Collection, The British Library, the Burdwan Family Collection, the Partho and Prithvi Tagore Collection… lends a sense of wonder of the magnitude and command that the city once held. It was home to the Nobel Laureate Rabindranath Tagore and Mother Teresa, to some of the greatest reformers and political activists like Raja Ram Mohan Roy and Subhash Chandra Bose, to some of the most legendary writers, filmmakers and musicians like Sarat Chandra Chattopadhyay, Satyajit Ray and Ustad Bade Ghulam Ali Khan, and not forgetting its architectural marvels—Victoria Memorial, the Howrah Bridge and the Great Eastern Hotel…

he photographs on this spread are of the Poddar and Neotia families in Calcutta. The text dwells on the union of both
the families, and their contribution to the thriving business culture, in the city.

Every photograph in the book is accompanied by brief text. What I particularly enjoyed about these nuggets of information is that they went beyond the confines of a traditional caption to include interesting details of the subject being discussed. For instance, when Tagore passed away, “the funeral was marked by such a frenzy of public emotion that his only son Rathindranath couldn’t even reach the cremation ghat… The procession to the ghat was riotously chaotic, with people manhandling the body and plucking hairs from the famous head. At the cremation itself, the crowd invaded the site before Tagore’s body was completely burnt, to hunt for bones and other relics,” the book mentions.

Flip the book over, and you are introduced to the beginnings of modern-day Kolkata. This part of the book too, opens with a map of the city, though far less captivating than the hand-drawn map from earlier. Another gatefold follows after this, this time of a panorama of the sprawling area surrounding Victoria Memorial. Another history lesson ensues in the next few pages (written by Indrajit Hazra, a writer and journalist), detailing the evolution of Kolkata, starting with the Naxal agitation from the 1960s.

A Rashtriya Swayamsevak Sangh shakha, with the Victoria Memorial in the foreground. The organisation is more popular outside Kolkata, having added 250 shakhas in West Bengal, by 2018. Syama Prasad Mookerjee, who founded the Bharatiya Jana Sangh in 1951, in Delhi, after consultations with RSS head M.S. Gowalkar, was a Kolkata boy, son of educator, jurist and barrister, Ashutosh Mukherjee.

The book then goes on to follow the same format, and presents pictures from various dominions of the city. This part appeared familiar. To a certain extent, it almost felt like looking at images from Bombay, my home. The pictures here have a more street-style documentary approach, as opposed to the formal documentation in the first half of the book. It was lovely seeing the confluence of Chinese street-style food with Bengali cuisine, and where time slows its pace at the local addas. All the photographs here were sourced from private collections, as well as photographers who reside in the 23 city, or have at some point—Chirodeep Chaudhuri, Farah Gherda, Ranita Roy, and the Sourendra Mulick Collection, amongst others. Though I enjoyed the images, I felt that certain aspects of the city could have been discussed with better visuals accompanying them.

As someone who has never been to Kolkata, the book provided quite a comprehensive look at the city, without being too daunting or factual. The images are resplendent, particularly in the first half of the book. Even though the city today is not as radiant as it was, I could glean the fierce pride that the Bengalis inhabit, with regards to their cultural heritage. The book is a must buy for its enriching research into the history of the city.

Your Pictures: Bring on the Night