An incredible history of the Konyak tribe narrated by the last generation of headhunters. Nilofer Khan explores the spirit of the culture through the powerful portraits and anecdotes in the book. 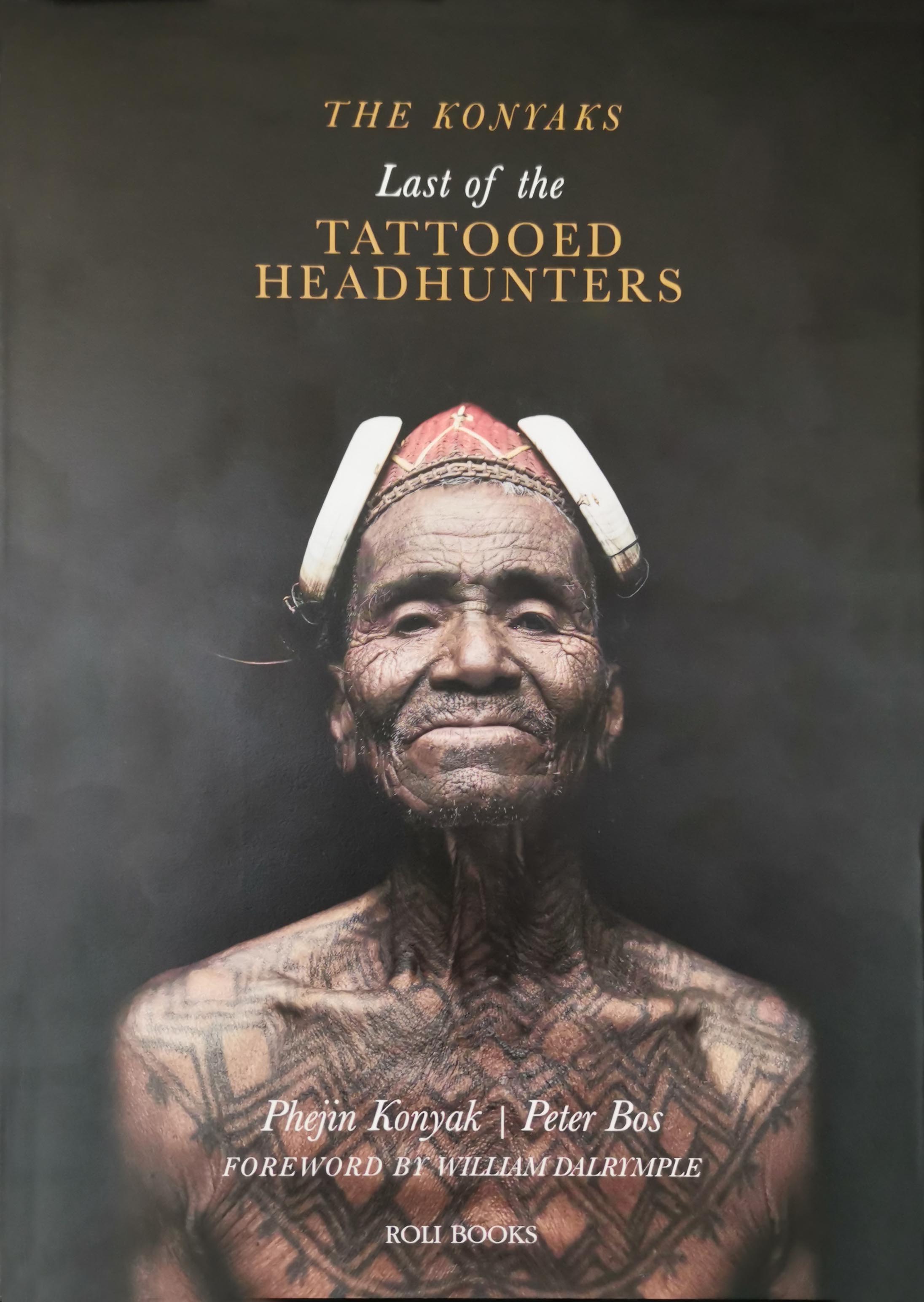 The Konyaks: Last of the Tattooed Headhunters

For centuries, humans have used their bodies as a canvas, embellishing it with intricate, traditional designs that stood as a symbol for their status, identity, religious beliefs, adornments, amulets, and even for therapy and punishment. The oldest recorded geometric patterns were discovered in 1991, on a mummy called Ötzi, also known as the Iceman, and dates back to 3370 to 3100 BCE. The markings point towards an early form of diagnostics or pain-relief treatment. While the origin of tattoo design in India is a mystery, the reasons to practice the art are similar to those that are seen across numerous cultures.

The Konyak tribe in Nagaland are no strangers to tattooing. But what surprises people the most is how their men receive the face tattoo; by decapitating members of rival tribes as a rite of passage for their young boys. The book begins with an entire spread of picturesque rice fields in a remote area of Nagaland. Flip a page, and you are given a brief history of the mysterious origin of the tribe, their discovery by the East India Company officers, and how due to globalisation and the conversion to Christianity, brought about changes in their lifestyle. “It is an oral tradition; nothing is written down. Now even some of the languages and dialects are dying. If we don’t do something about it now, it’s going to be lost forever. We will be lost in the global mulch and have no identity, no idea of who we are or where we are from,” Phejin Konyak said, the great grand-daughter of the prominent tattooed headhunter, Ahon. 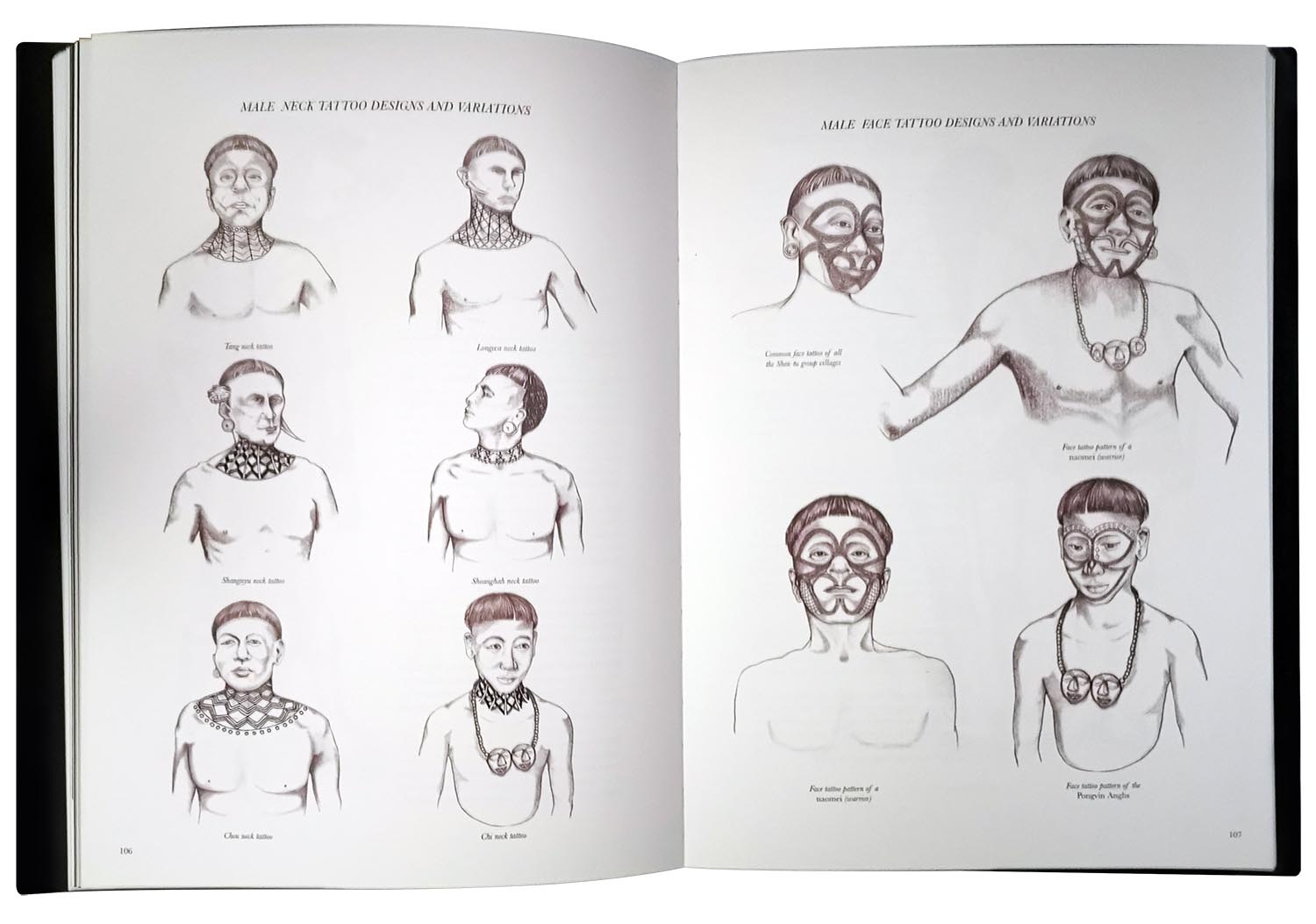 Sketches of the various male necks, along with face tattoo designs and its variations.

Over the next few pages, there is a map that shows where the three tattoo groups reside in the remote areas of Nagaland, followed by a compelling insight into Phejin’s childhood, which details her early understanding of her culture. Years later, as an adult, she had an epiphany that led her to document the last of the tattooed headhunters.

The book has been divided into various segments. The initial part gives an idea about Konyak culture and its traditions. Some text contains poems, details about their religion, festivals, social structure, occupation, and practices such as teeth blackening. It also explains the origins and reasons behind head-hunting, the tools and techniques involved, the artists, as well as the rituals that take place before and after tattooing. It also mentions how tattooing was officially banned by the 1970s. The books also includes three chapters that specifically discuss each tattoo group—the Shen-Tu (face tattoos), Tangta-Tu (body tattoos), and Kong-Tu (nose tattoos). 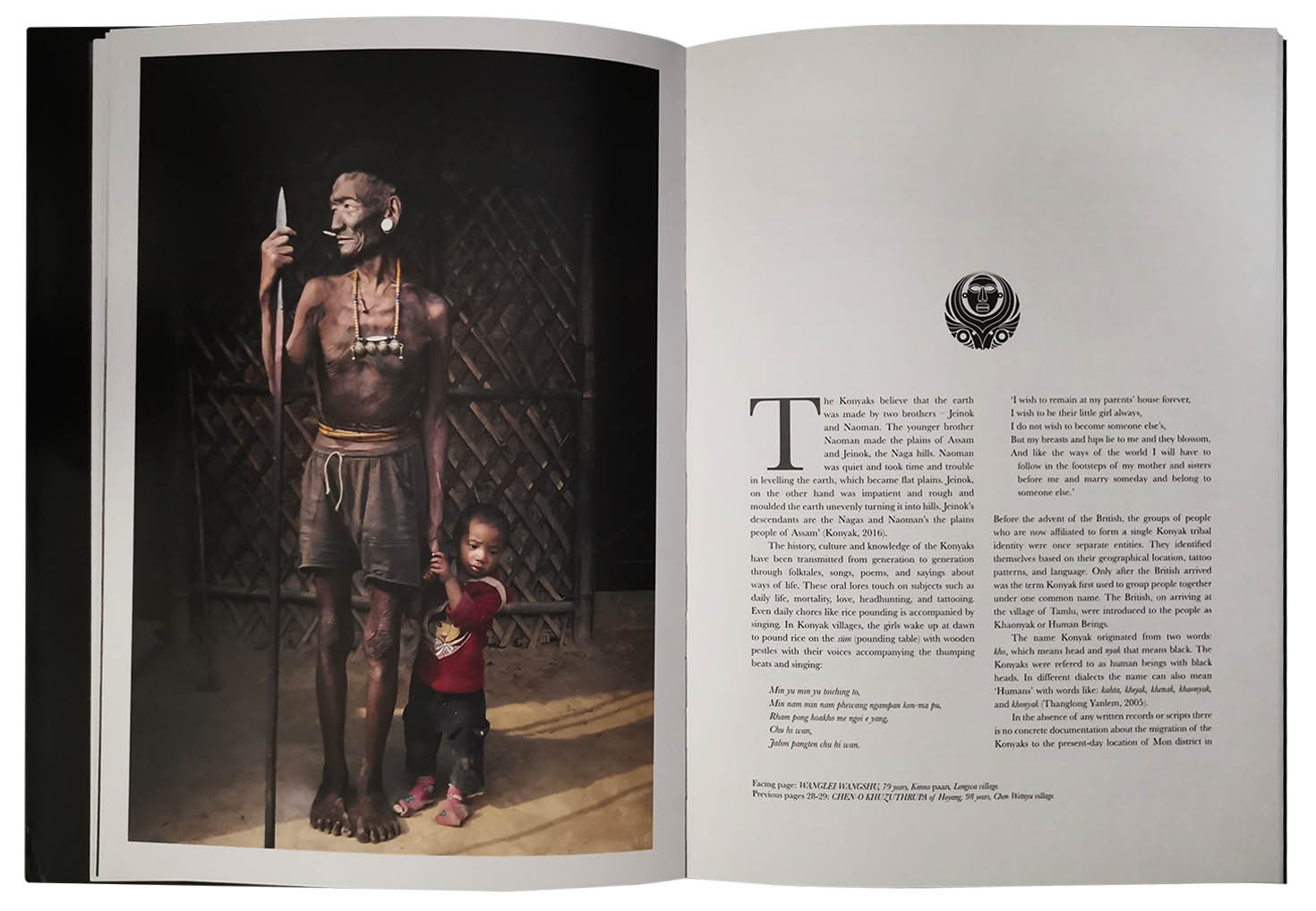 Each segment accompanies evocative photographs shot by Peter Bos, against a dark background, or against intricate backgrounds that feature traditional objects such as spears, headgears, and animal skull mounts. Some images have been shot inside the house and on the veranda. All of the elderly headhunters look at the camera with grace, their expressions tranquil, yet melancholic. Bos also includes pictures of the longhouses, the paan (men’s club), the grandchildren taking care of their siblings, and the festivals. Moreover, the images have a muted, subtle feel to them, which you don’t often get to see in photobooks. The printing and the paper are of excellent quality. The author has also incorporated detailed sketches that help you distinguish between the tattoo designs, as well as their folklores. Each tattoo has a name in their dialect that changes from group to group, the age of receiving it, and the reason behind it, too. 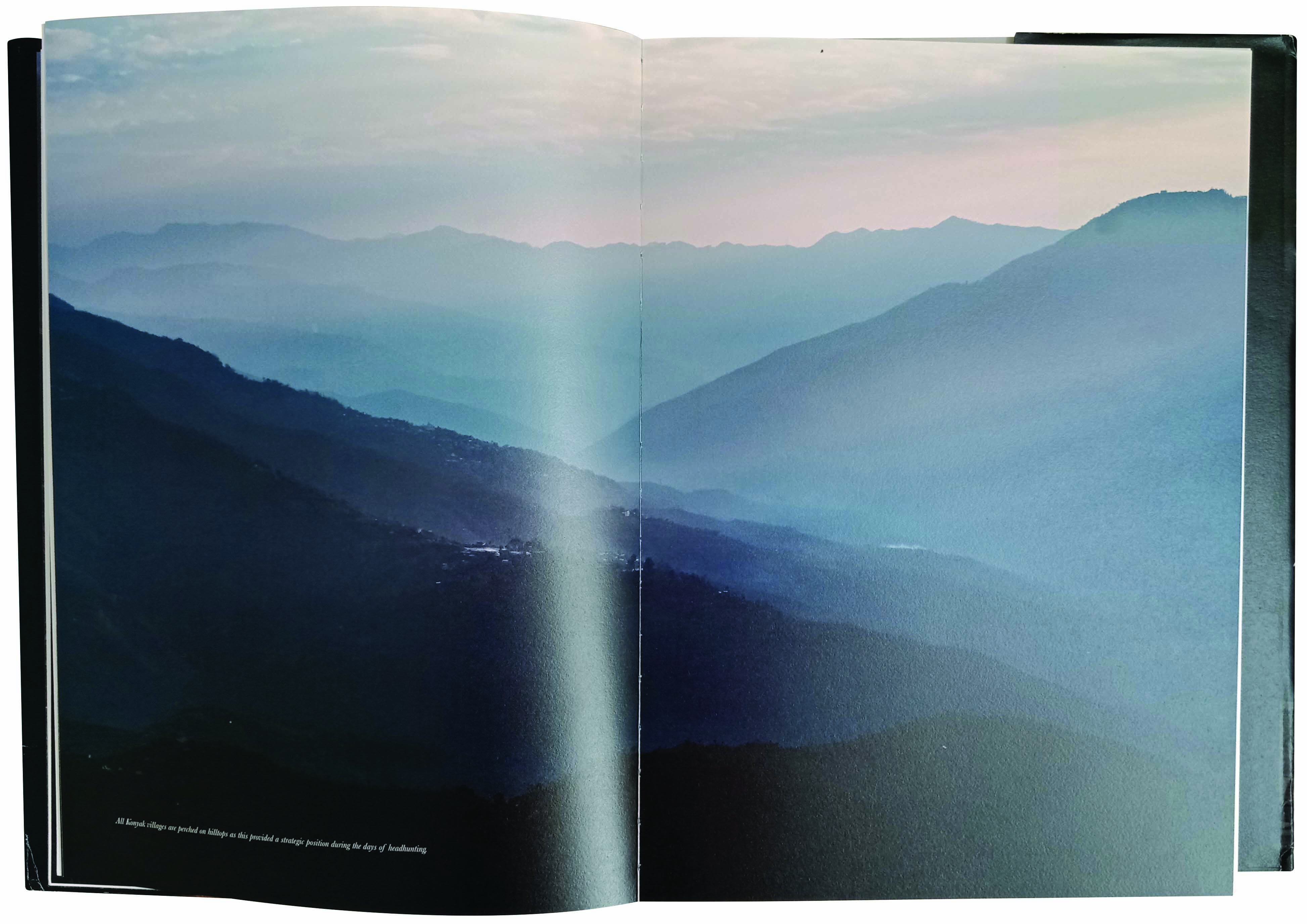 It took Phejin and Peter three long years to conduct a thorough research about the Konyaks. For Phejin, the book is a personal journey against all odds to retrace her dying roots that may be lost forever, with the passing of the last headhunter. The in-depth and meticulous documentation and representation of the tribe makes it a great book to add to your collection.