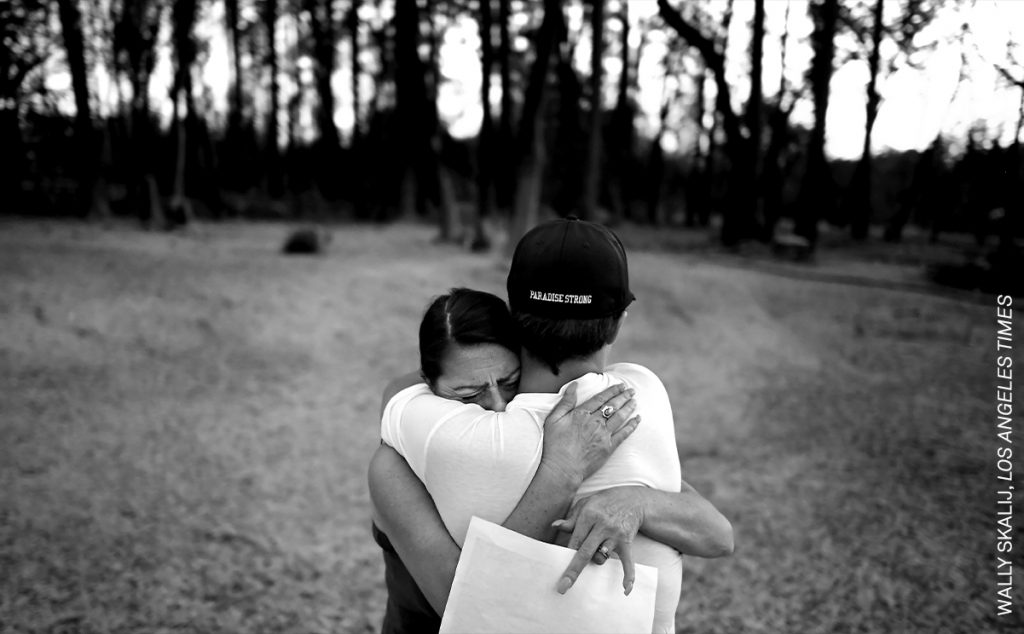 Emmie Morgan and her son Setson, a Paradise Bobcats running back, comfort each other as they visit the site where their home once stood, on 11 June 2019. Photograph/Wally Skalij

Rise from the Ashes: Following a wildfire that devastated their town, members of the Paradise Bobcats from the small rural community of Paradise, California, United States, returned to their football field to revive the team and embark on a new season. The November 2018 Camp Fire was the most destructive wildfire in Californian history. Paradise was almost completely burnt to the ground, and 90% of its population were dispersed to towns and cities across the US, but the fire stopped at the edge of Paradise High School’s football field, sparing it and the surrounding sports buildings. Nearly everyone on the team lost their home, but players began returning when coach Rick Prinz started practices, some commuting for up to 90 minutes to get there. They saw reviving the team as a part of rebuilding the community. The Bobcats went on to have a successful season, playing undefeated until losing the final for the championship at the end of the year. 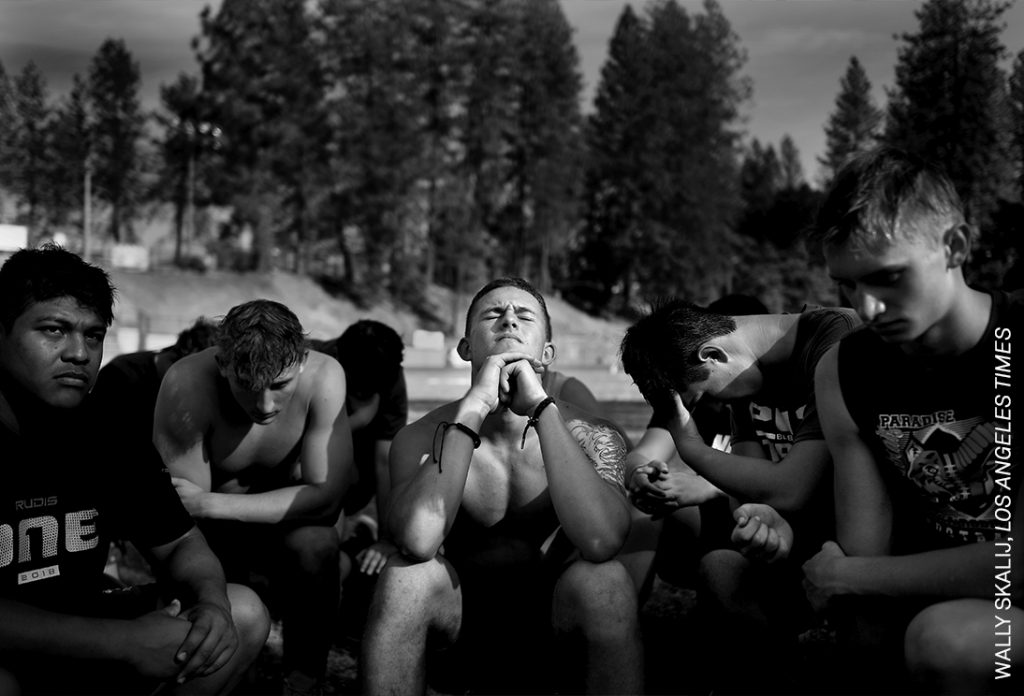 Lukas Hartley (center) listens to a Paradise Bobcats coach give a pep talk on 22 August 2019, before their first game of the season since Camp Fire devastated their town. Photography/ Wally Skalij

Emmie Morgan cheers as first responders are honored during the Paradise Bobcats’ first game on 23 August 2019 since the fire that devastated their town. Photograph/Wally Skalij 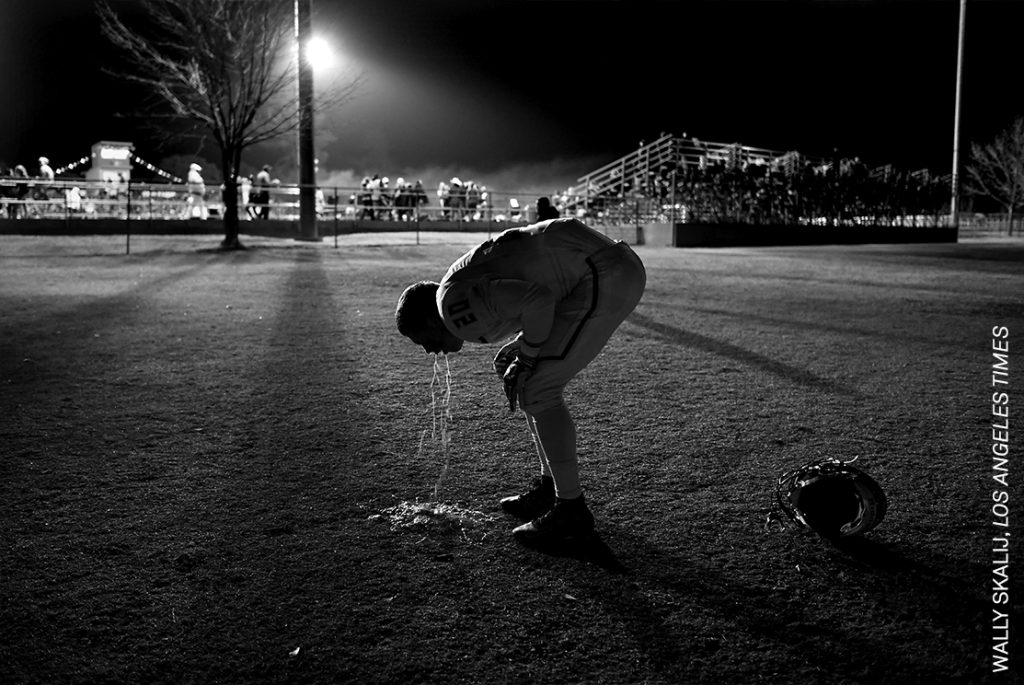 Running back Lukas Hartley Deals with his nerves before a Paradise Bobcats playoff game against West Valley in Cottonwood, California, United States, on 22 November 2019. Photograph/Wally Skalij 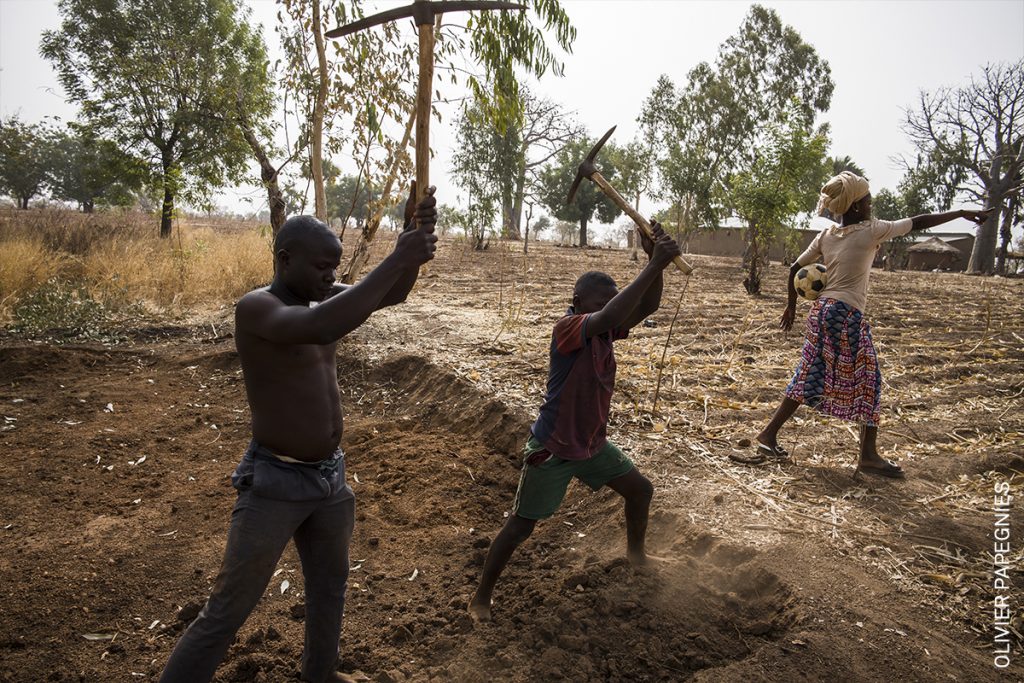 Virginie passes two cousins digging up earth for bricks, as she goes to visit her uncle in Gouandé, Benin, on 21 February 2019. Photograph/Olivier Papegnies 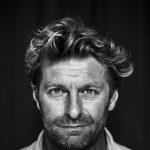 Olivier Papegnies lives and works as a photojournalist in Brussels.
Since becoming a photojournalist in 1997, his reports have been published by Belgian and international press and he has worked with various non-governmental organizations, including Médecins du Monde.
Image credit: Johanna de Tessieres

The Gouandé Gazelles: The Gazelles de Gouandé from Gouandé village in northern Benin is one of 16 football teams set up across the country with the aim of giving young women more control over their futures through sport. The project, established by the Plan International organization, aims to empower women by promoting self-confidence, widening educational opportunities, and through advocacy against early marriage. Following the 2019 Women’s World Cup, there was an international surge of interest in women’s football, and projects like the one in Benin can be seen as part of a wider view of the power of sport to unify and spread social awareness. In January 2019, Benin hosted a delegation from FIFA, football’s international governing body, aimed at supporting a new sports strategy in schools, and Beninese president Patrice Talon announced plans for four new football schools, including one for women. 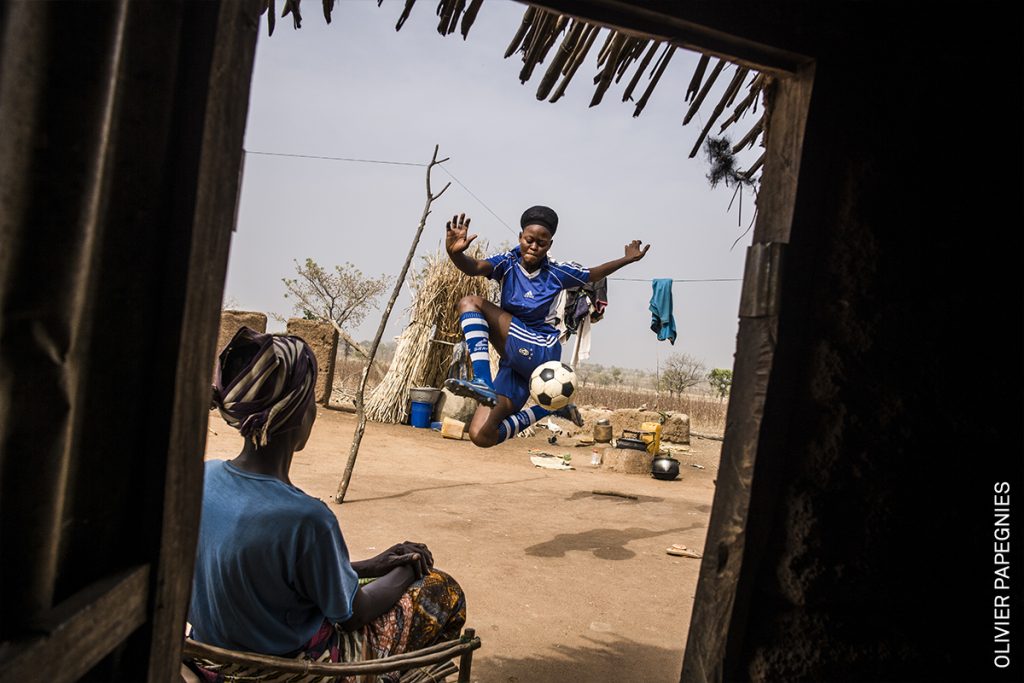 Bélassé Tchari (left), in Gouandé, Benin, gets up every morning to work in her field to feed her seven children. She works hard to put Virginie and her two sisters through secondary school and encourages their footballing ambitions. 21 February 2019. Photograph/Olivier Papegnies 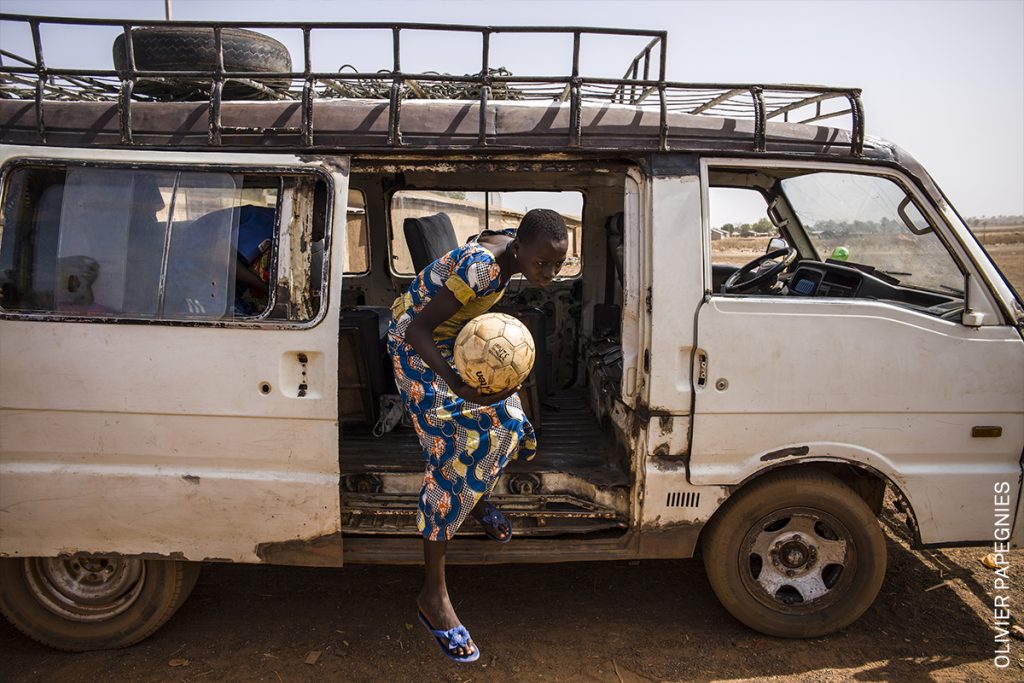 The Dassari football team arrive in Gouandé by bush taxi to play their first game of the season, against the Gazelles de Gouandé, on 24 February.  Photograph/Olivier Papegnies 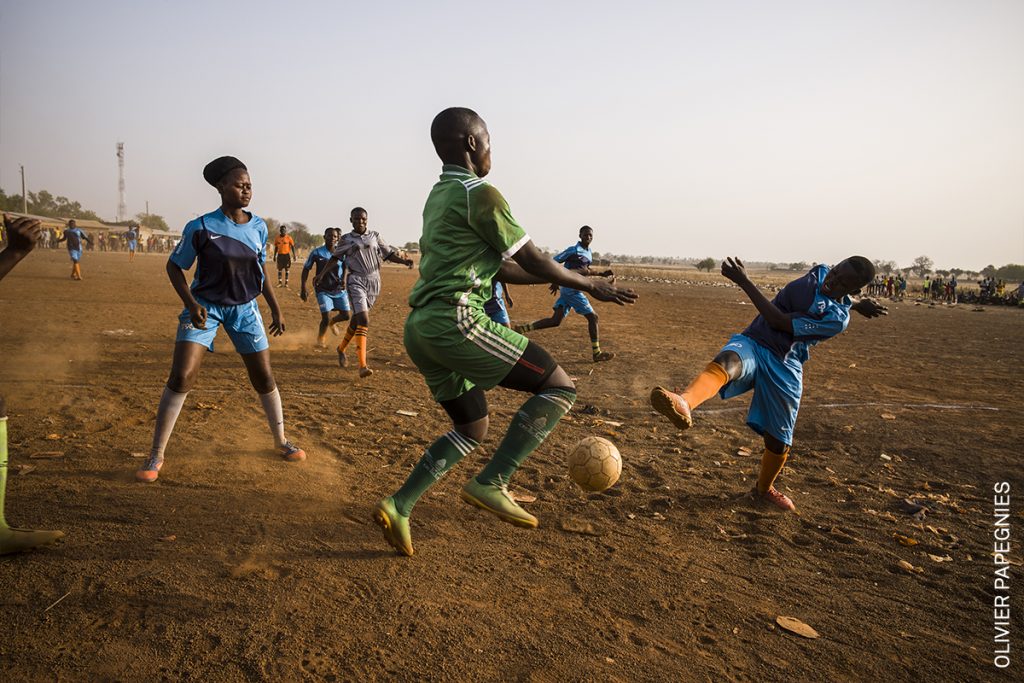 Two Gazelles strikers face ‘Beton’, the Dassari team goalkeeper, during a match between the two teams, in Gouandé, Benin, on 24 February 2019. Photograph/Olivier Papegnies 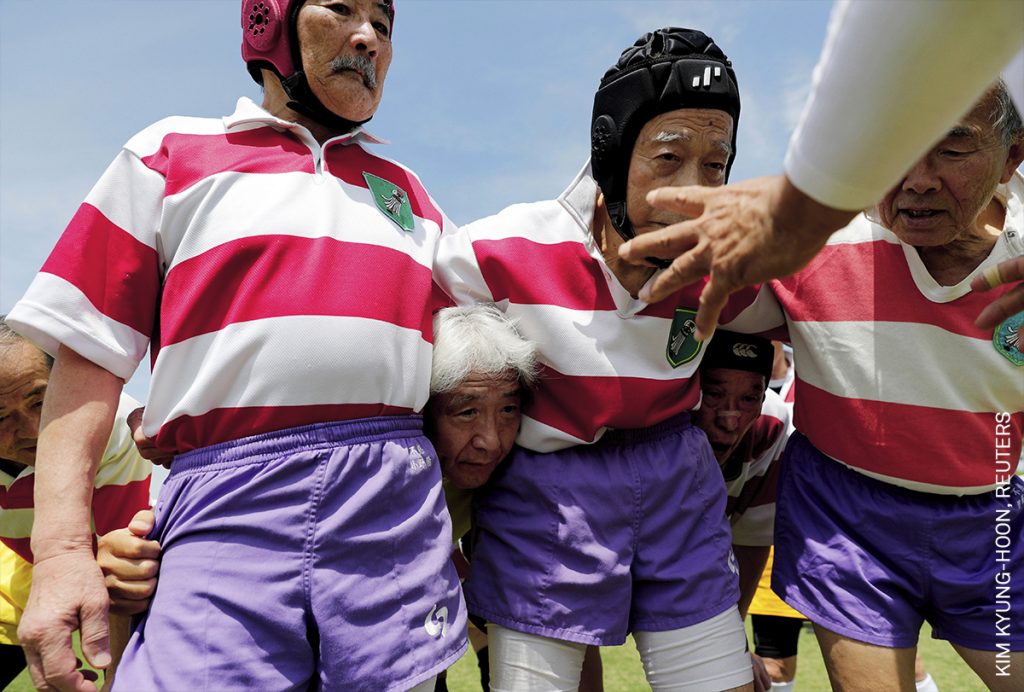 Ryuichi Nagayama (center) practices before a match in Kumagaya, Japan, on 3 May 2019. At 86 years old, he is Fuwaku Rugby Club’s oldest active player. Photograph/Kim Kyung-Hoon 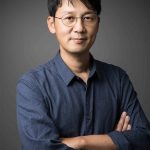 Kim Kyung-Hoon received a master’s degree in Photojournalism and Documentary Photography at London College of Communication.
n 2019, he was one of a team of Reuters’ photography staff awarded the Pulitzer Prize for Breaking News Photography. Image credit: Kim Jung Sun

Japan’s Veteran Rugby Players: Tokyo’s Fuwaku Rugby Club, founded in 1948, is one of around 150 Japanese clubs that stage competitive, full-contact matches for players over the age of 40. Japan is the country with the largest aging population in the world, according to a United Nations report, with 28% of its population aged 65 or more. Seniors are particularly vulnerable to loneliness, with 15% of elderly men who live alone having fewer than one conversation in two weeks, according to a report in The Japan Times. Rugby not only keeps the players active, but offers a ready-made social life. The 2019 Rugby World Cup, held in Japan from September to November, boosted awareness and enthusiasm for the sport, with match attendance breaking previous World Cup records. 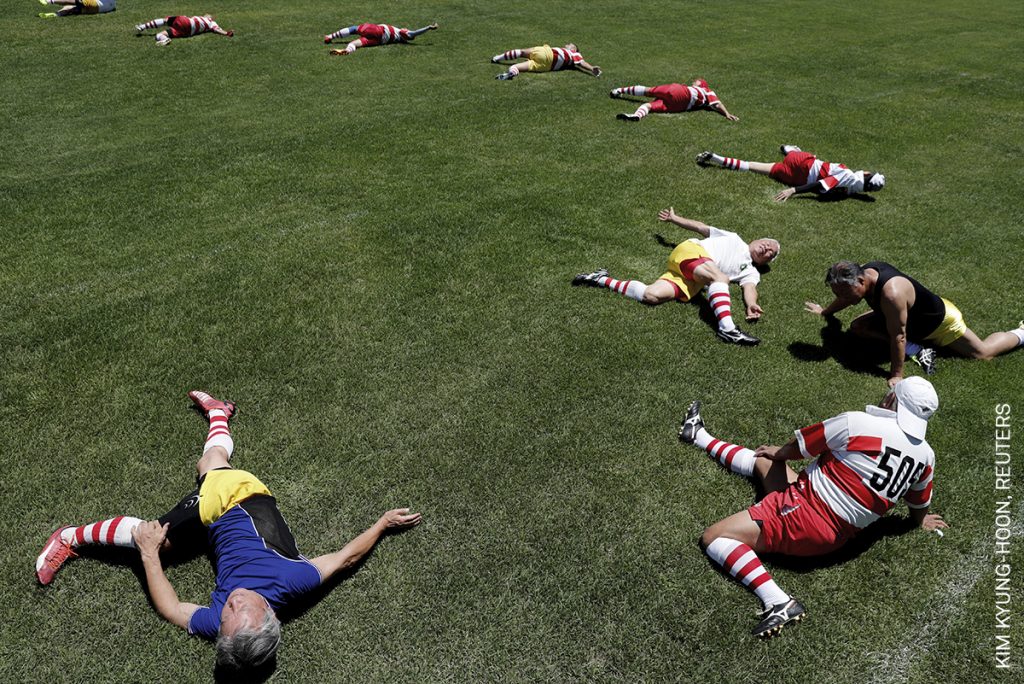 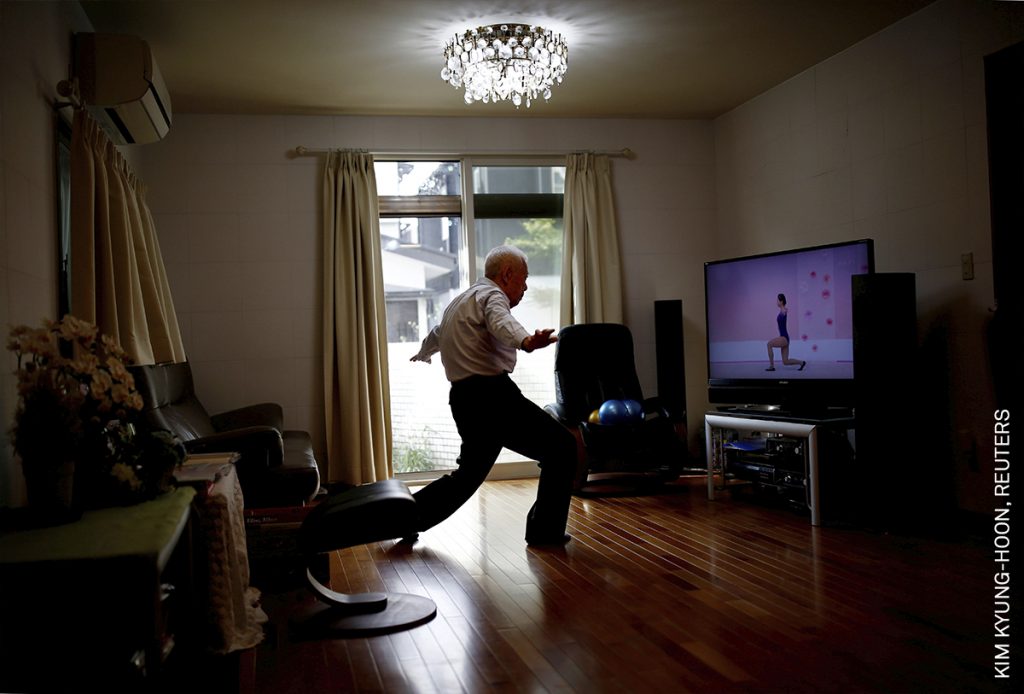 Ryuichi Nagayama (86) stretches as he watches a televised exercise program at home in Tokyo, Japan, on 18 May 2019. Photograph/Kim Kyung-Hoon 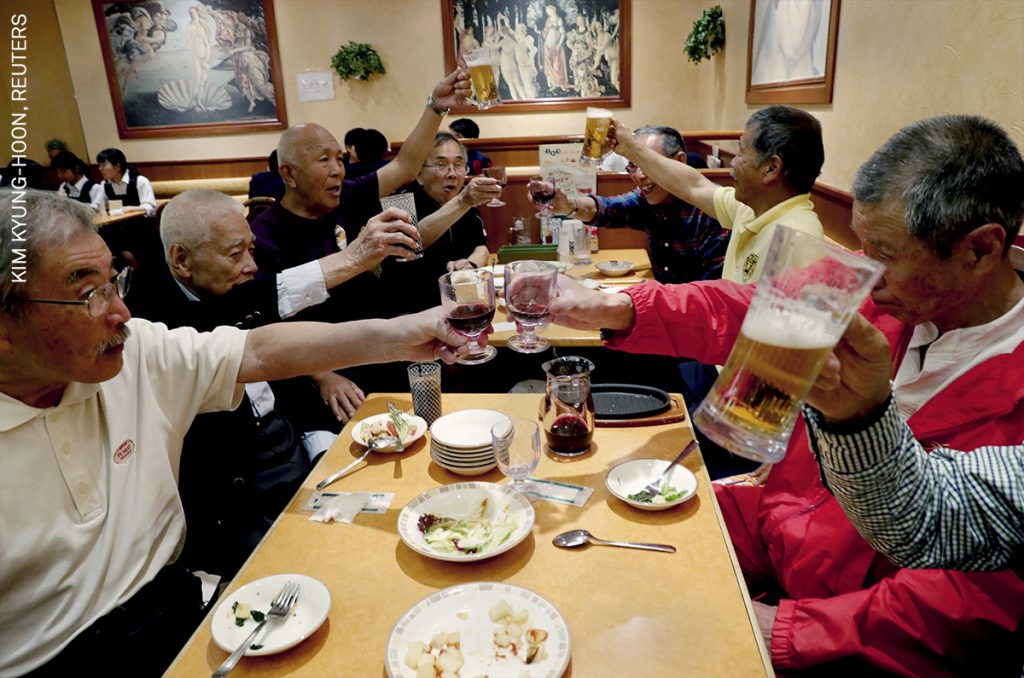 Members of the Fuwaku Rugby Club team have a drink at a restaurant after a match in Kumagaya, Japan, on 3 May 2019. Photograph/Kim Kyung-Hoon