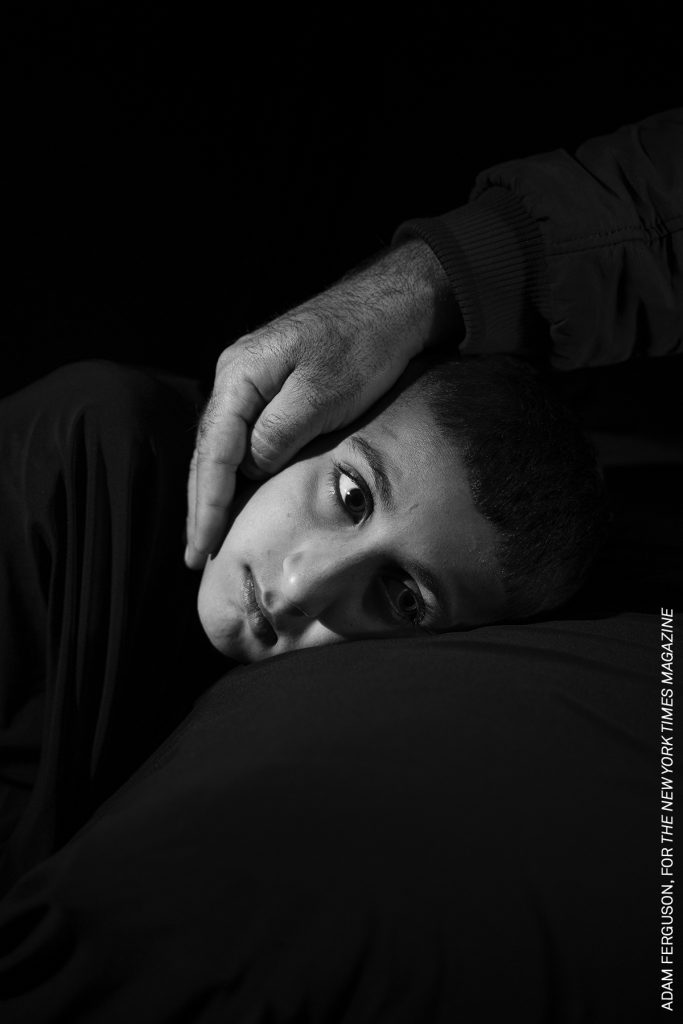 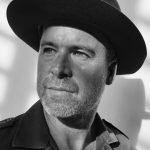 Adam Ferguson studied photography at the Queensland College of Art, Griffith University. After graduating, he traveled from port to port through the Caribbean and Mediterranean as crew on a sailboat to fund the start of his photographic career.
Image credit: Kathy Ryan

The Haunted: As the Islamic State group (IS) retreated from territory around Mosul in northern Iraq, thousands of former IS prisoners were liberated, many in severe states of trauma. The photographer took posed portraits of displaced Yazidi people and other minorities who had suffered human rights violations perpetrated by IS, in camps for displaced people in northern Iraq. The Yazidi religion is monotheistic and can be traced back to ancient Mesopotamian and Abrahamic roots. Due to their unique beliefs, the Yazidi people were seen by the Sunnis of IS as ‘devil worshippers’. When IS occupied ancestral Yazidi lands in northern Iraq in 2014, IS fighters massacred around 5,000 Yazidi men. Women and girls were abducted and forced into sexual slavery, and boys forced to train as child soldiers. Some 500,000 Yazidis were displaced. Many now live in refugee camps in Iraqi Kurdistan and Nineveh Governorate in Iraq. Jan Kizilhan, a psychologist working in one such camp at a center for people who survived the atrocities, points to the effects of this severe personal and cultural trauma. These include feelings of helplessness and powerlessness, tension, and a variety of physical illnesses. 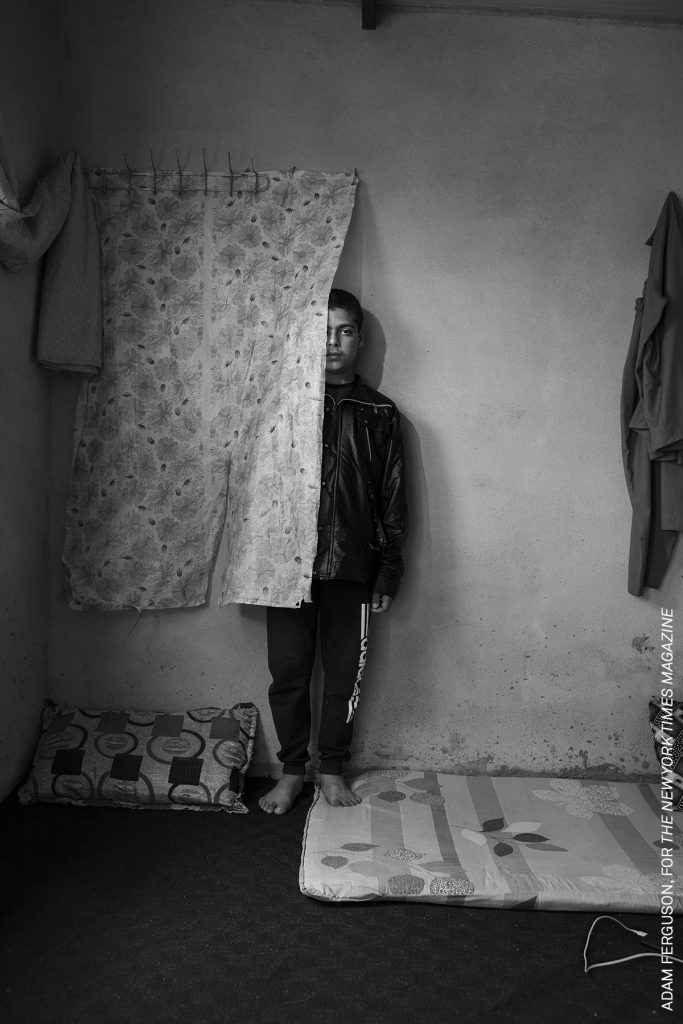 Jitan (14), pictured in Khanke Village, Dohuk, Iraqi Kurdistan, on 20 April 2019, was kidnapped in 2014 and now speaks Arabic better than his native Kurdish. Several members of his family are still missing. Photograph/Adam Ferguson 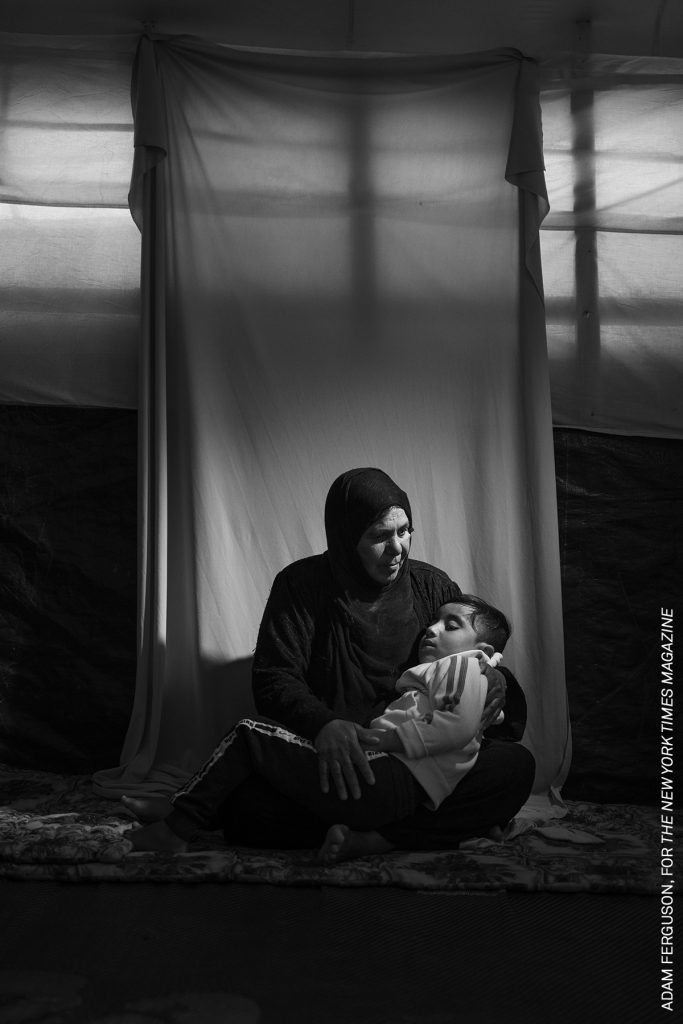 Noora Ali Abbas (60) sits with her grandson Harreth (6) in their tent in Salamiyah IDP Camp 2, Nineveh, Iraq,on 22 April 2019. Noora says Harreth’s father was taken by IS in 2015, but Harreth is stateless and unable to get an Iraqi government ID because the authorities believe his father was an IS fighter. Noora suffers from depression and anxiety and doesn’t like to let Harreth out of her sight. Photograph/Adam Ferguson 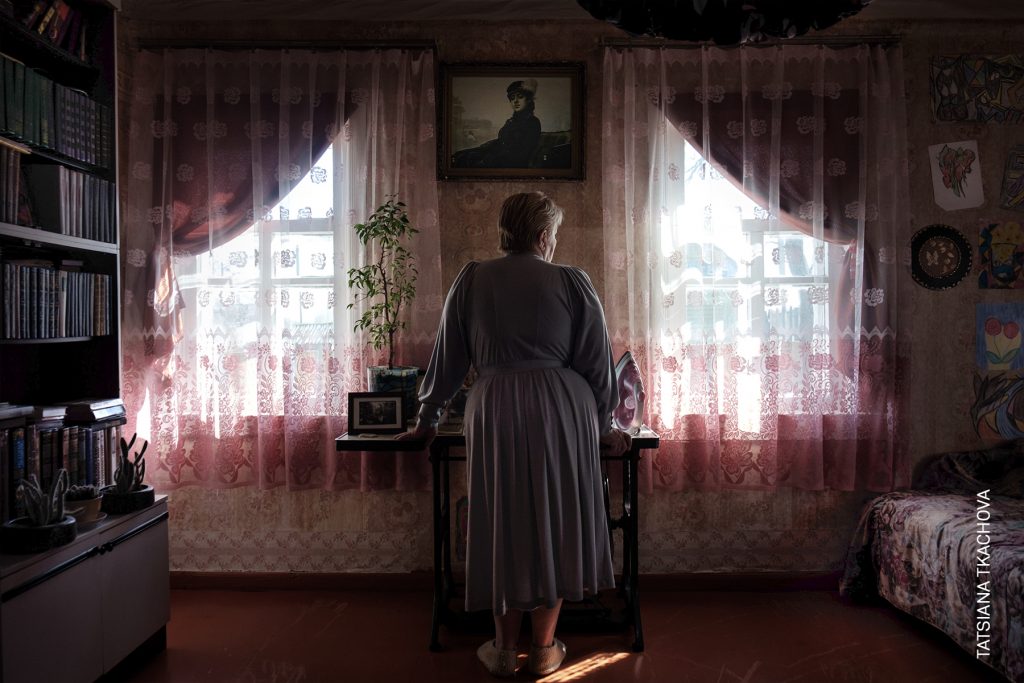 Natalia (62) was pregnant at the time of the explosion at the Chernobyl nuclear power plant. Although the baby was born healthy, she didn’t dare risk another pregnancy as she feared the effects of radiation. She also felt she could not cope with two children, so had an abortion the second time she conceived. 22 April 2018. Photograph/Tatsiana Tkachova 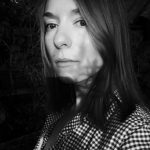 Tatsiana Tkachova is a photographer based in Minsk, Belarus. The main focus of her projects is women, particularly the topics of gender violence, conflict and resistance. Image credit: Tatsiana Tkachova

Between Right and Shame: Belarus abortion laws allow termination on request up to 12 weeks of pregnancy, and in certain medical or social circumstances up to 28 weeks, which places them among the most liberal in Europe. Nevertheless, abortion is still a taboo for many women, and many are reluctant to admit they have had a termination. ‘No abortion week’ campaigns are held annually, and the decision to have a termination is often accompanied by a sense of shame. In this project, Belarusian women who have considered or undergone abortion tell their stories. The women had a range of concerns behind their decisions surrounding abortion—from contamination after the Chernobyl nuclear disaster to fear of poverty, not wanting to be a single parent, or a background of sexual abuse. As their decisions were often made with difficulty, in this story they did not want to show their faces and their names have been changed. 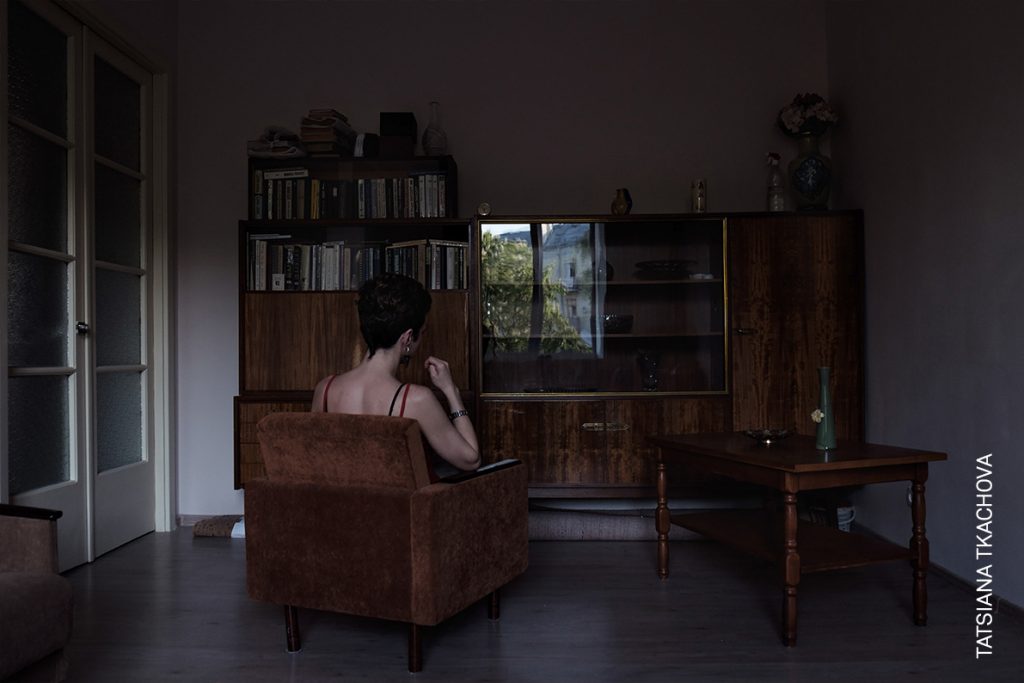 Alexandra (35) first had an abortion when she was 23 and living abroad, after her older boss had forced her into a sexual relationship. She says she felt relieved afterwards. Alexandra again chose to have a termination some years later, when she was married and expecting a second child. As a nursing mother at the time, she was not allowed a pill-induced abortion but had to delay and have a clinical procedure. Proceeding with a pregnancy she knew she was going to end upset her deeply. 25 May 2018. Photograph/Tatsiana Tkachova 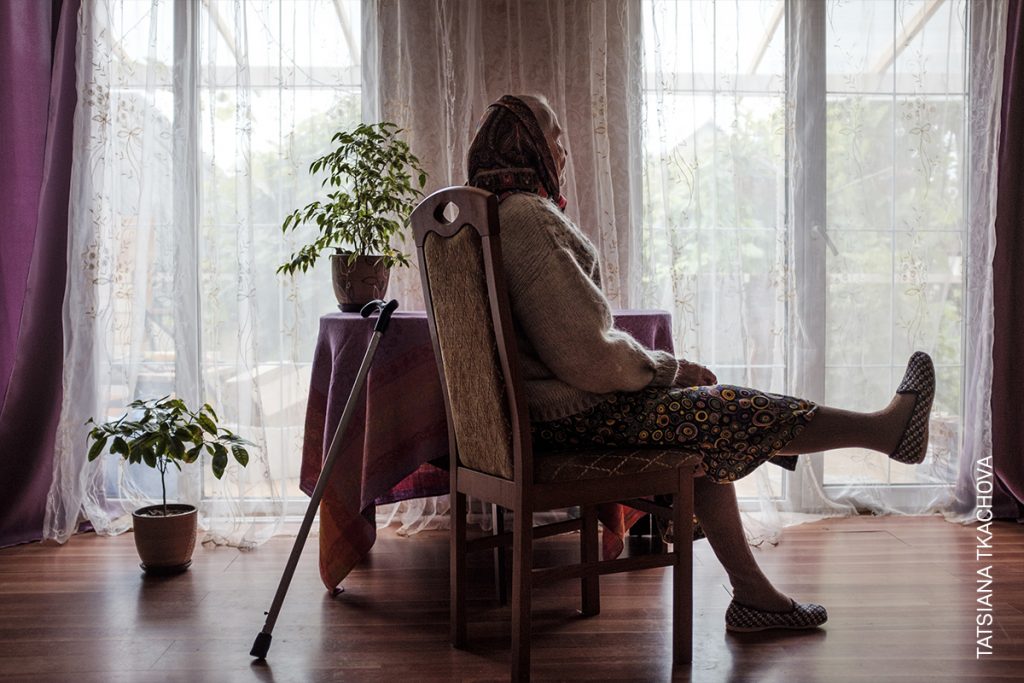 Diana (91) had her leg amputated when she was very young and fell pregnant at the age of 20. The father and she were in a casual relationship and he left her when he found out. His mother said she did not want a crippled daughter-in-law. Diana felt nobody needed her with her disability, never again allowed anybody to come close, and never married. 28 September 2018. Photograph/Tatsiana Tkachova 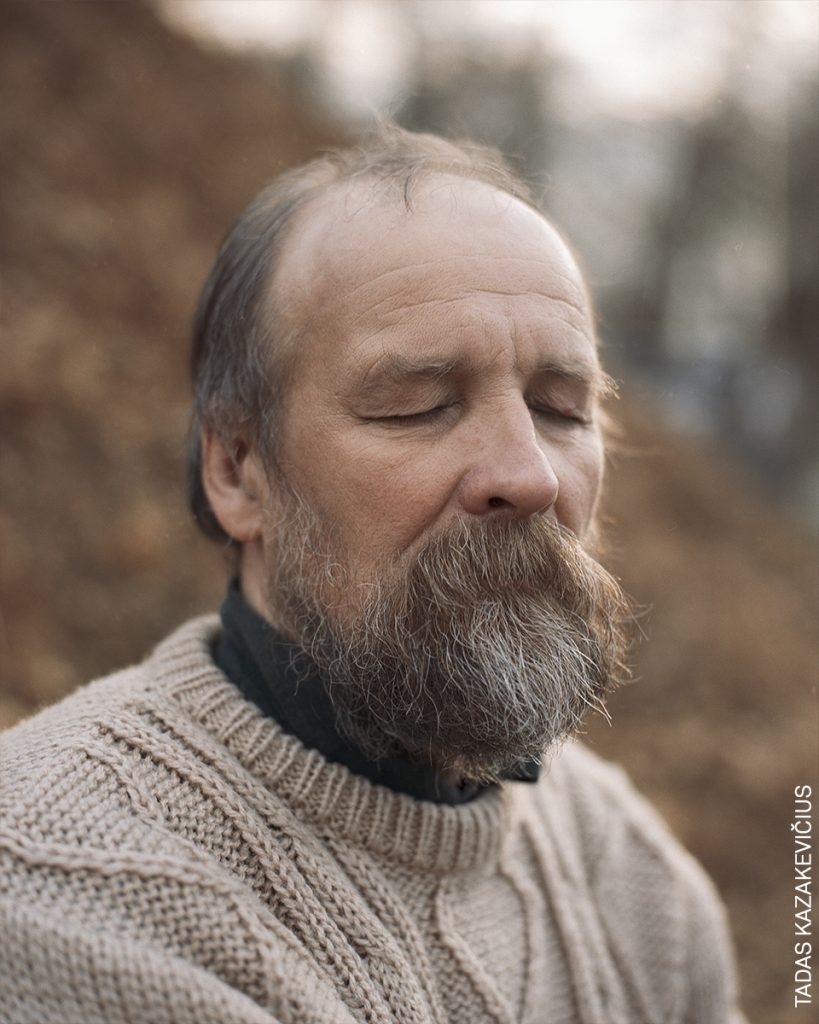 Local sculptor Albertas ‘feels’ his place in Griekyne, a boggy forest on the Curonian Spit, Lithuania, where, at a tree called Sin Linden, old people would come to pray to the Baltic gods and repent their sins. 27 April 2018. Photograph/Tadas Kazakevičius 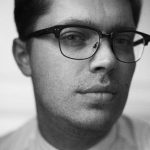 Tadas Kazakevičius is a documentary and portrait photographer based in Vilnius, Lithuania. In 2019, he became a member of the international documentary photography cooperative, ‘Inland Stories’. Image credit: Kęstutis Žilionis

Between Two Shores: The Curonian Spit is a 98-kilometer-long curved, sand-dune spit that separates the Curonian Lagoon from the Baltic Sea. Its southern portion lies in Kaliningrad Oblast; the northern part is in Lithuania. The dunes are among the highest in Europe, and the Spit has attracted artists for centuries. At times it is no more than 400 meters wide, at most 3,800 meters. Even at its heart, you are never far from one or the other shore. The photographer wants to convey that space is supposed to be heard, smelled, absorbed, and felt with all possible senses because the eyes do not show enough. The subjects of the portraits chose their own locations, and closed their eyes to emphasize their connection to the landscape. 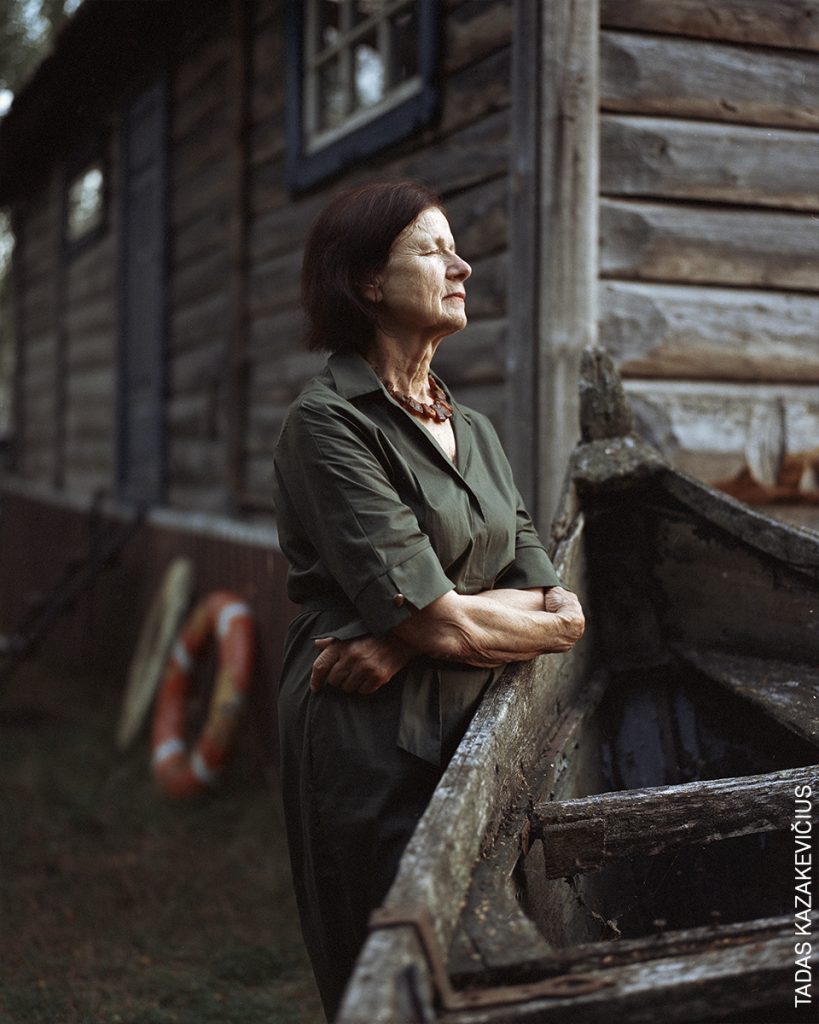 Vitalija, wife of an artist who has passed away, stands beside a boat her late husband was planning to restore, on the Curonian Spit, Lithuania, on 27 July 2018. Photograph/Tadas Kazakevičius 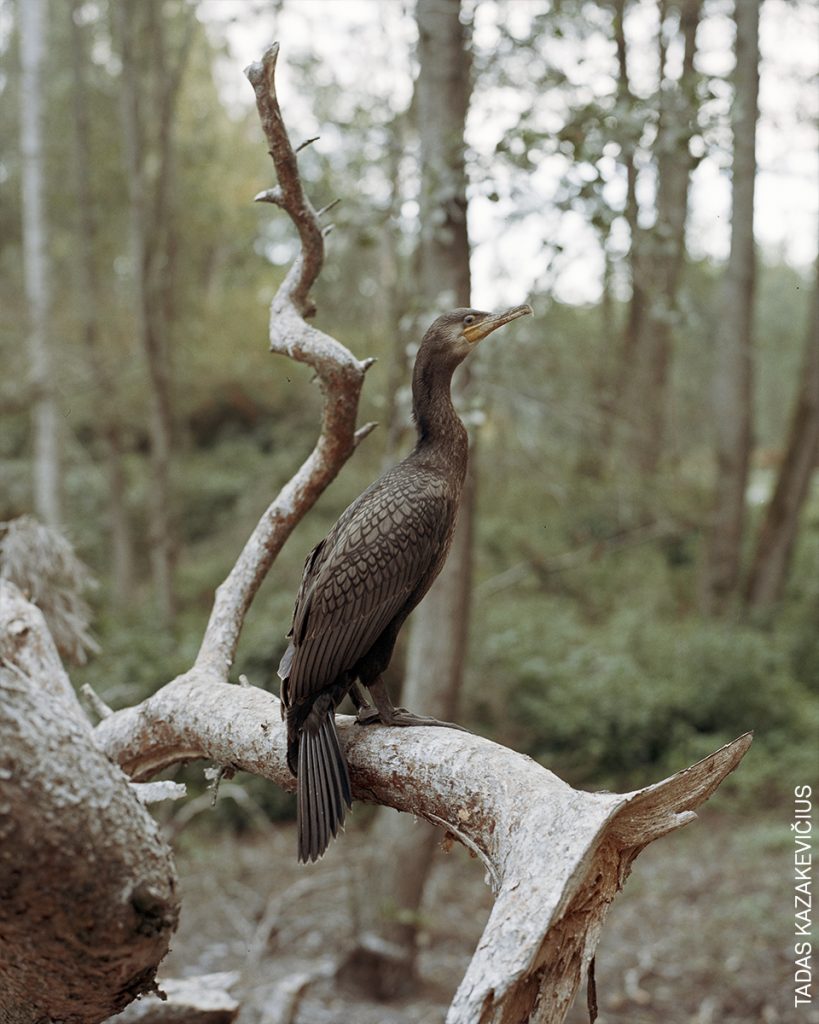 Cormorants were once culled as they reduced fishing yields, but have been making a comeback since the 1980s, just as Lithuanians have been returning to the Curonian Spit since World War II. 25 July 2018. Photograph/Tadas Kazakevičius 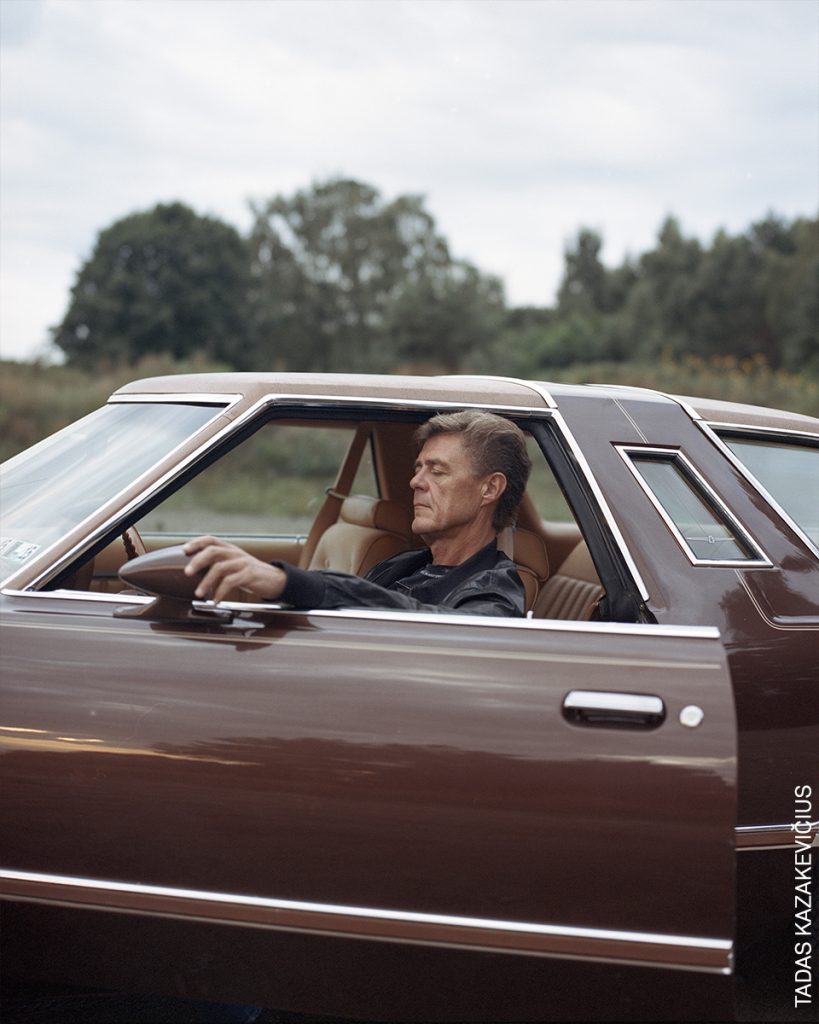 Arunas is famous for driving his big Ford Thunderbird around this part of the Curonian Spit, Lithuania, on 28 August 2018. Photograph/Tadas Kazakevičius