Over the years, the Hamdan bin Mohammed bin Rashid Al Maktoum International Photography Award (HIPA) has showcased incredible imagery from all around the world, symbolic of the unique themes of their contests. Water was the theme of their latest contest, where photographers made submissions based on their interpretation of the theme.

This year, the contest saw a distinguished judging panel that comprised of some of the biggest names from the world of photography—Haitham Fathallah Aziza, Kathy Moran, François Hébel, Robin Moore, Conrad Anker, and Cristina Mittermeier—who went through the entries of the following categories—Water, General (Black and White), General (Colour), Portfolio, and the brand new Mobile Photography category.

Secretary-General, Ali bin Thalith thanks His Highness Sheikh Hamdan bin Mohammed bin Rashid Al Maktoum, Crown Prince of Dubai, Chairman of the Executive Council and Patron of HIPA, for his continued support of HIPA and the art of Photography. Bin Thalith also said, “We conclude today the ninth season of HIPA, Water, man’s oldest friend on the planet. All the inhabitants of Earth know water, but some fear it. The relationship of a fisherman with water is not like that of someone who does not know how to swim. It is completely different from the relationship of the scientific researcher, who is concerned about the frightening acceleration of the melting icebergs underwater. We watch today how the creators of the world see the water through their lenses; Water, the major issue that concerns us all, and touches our lives and the survival of our planet.” 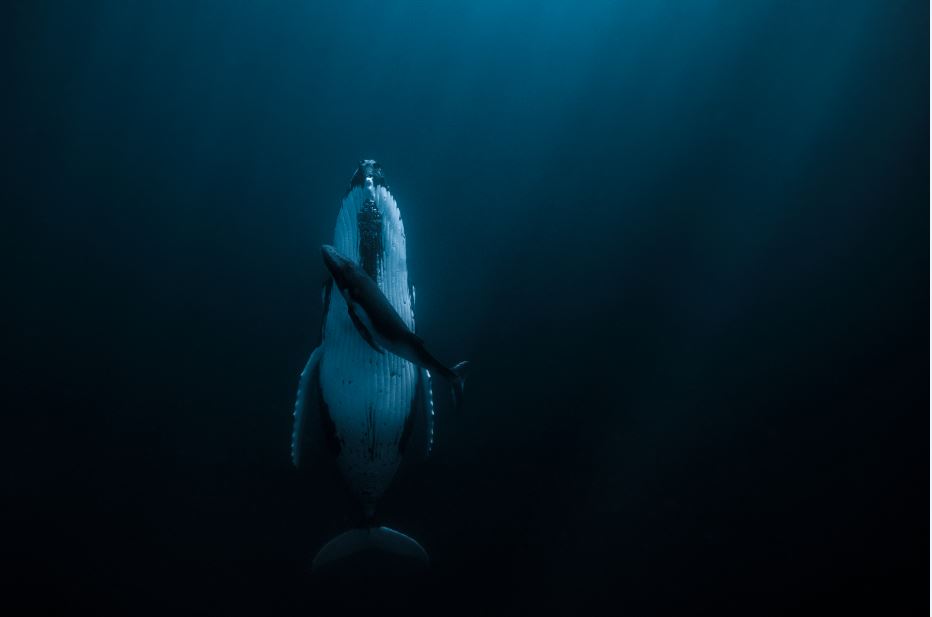 Essence of Life: A mother humpback whale is seen resting with her newly born calf in the Kingdom of Tonga. The rain fell rhythmically in a soothing pitter-patter on the water’s surface, gently lulling them. As we floated and watched them, the sound of the rhythm faded just a little and the ocean calmed just enough for the tranquil pair to rise up, meeting the light rays just starting to break through the surface.

The Downpour: This photo was taken in Iceland. The waterfall is called ‘Dynjandifoss’ and is one of the most beautiful waterfalls in Iceland (also known as the Fjallfoss or mountain waterfall). With this image, I wanted to capture the beauty of nature and portray how small and insignificant we are compared to this wild nature. By using a slower shutter speed (half a second), the water of the waterfall is shown as a beautiful bridal veil. 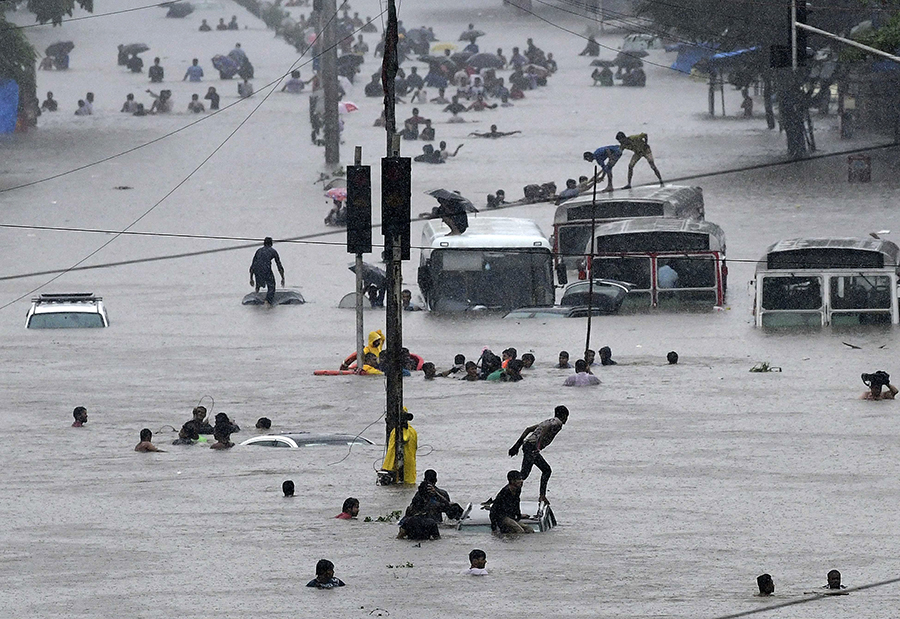 What a problem!: People climb onto buses and cars submerged in floodwaters to save themselves during the monsoons in Mumbai, India. Water has always been known as the essence of life, however in the recent past, due to climate change, water or the lack of it, has become a destructive force. Droughts, floods, tsunamis have become more common now than ever. 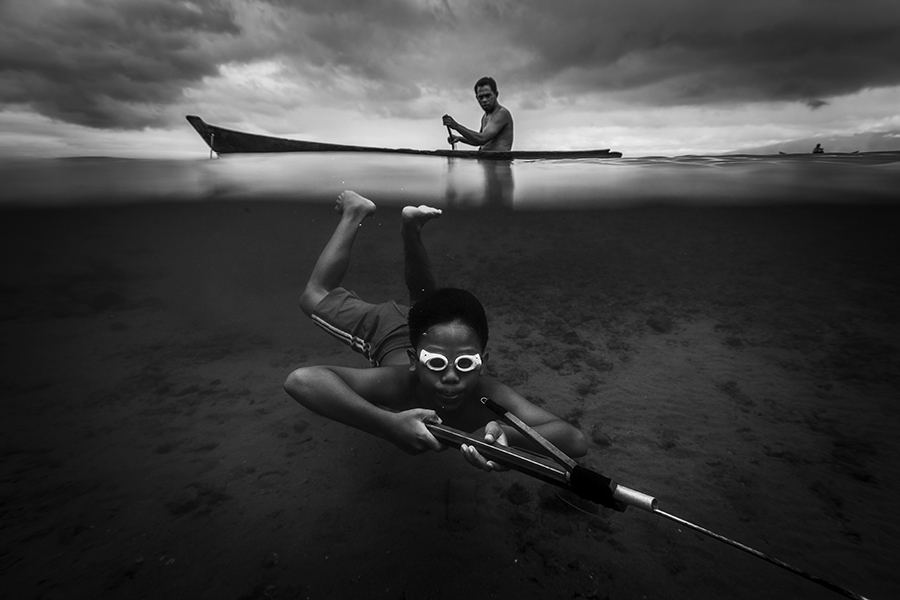 Octopus Hunter: A portrait of a child looking for an octopus around the coast of a fishing village in Ambon, the Maluku islands. The lives of children here rely on the sea, where they are used to doing everything themselves from a very young age. 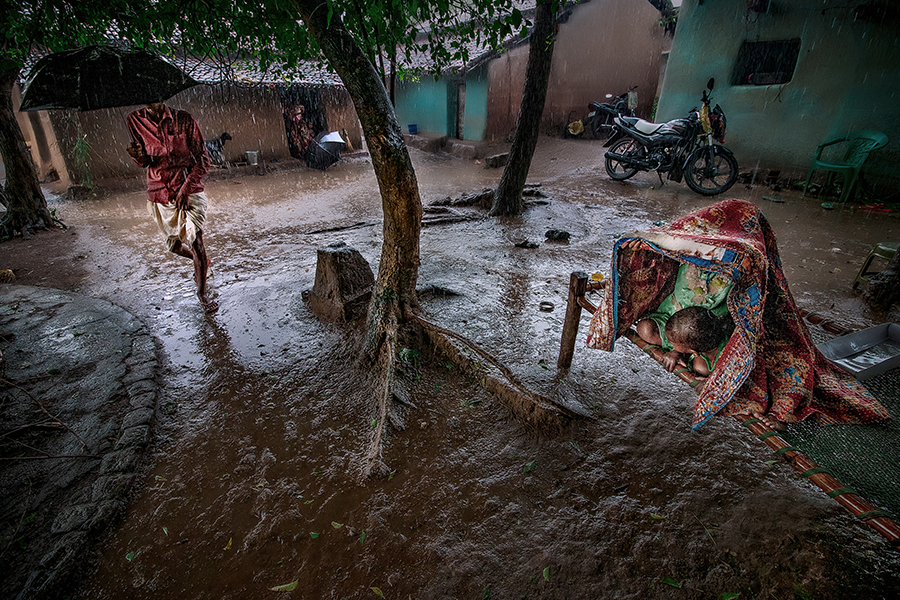 Save Me: At one point, a few children were playing and suddenly the sky collapsed and the rain came pouring down. There was no shelter in the area, until their father ran to save them from the rain. 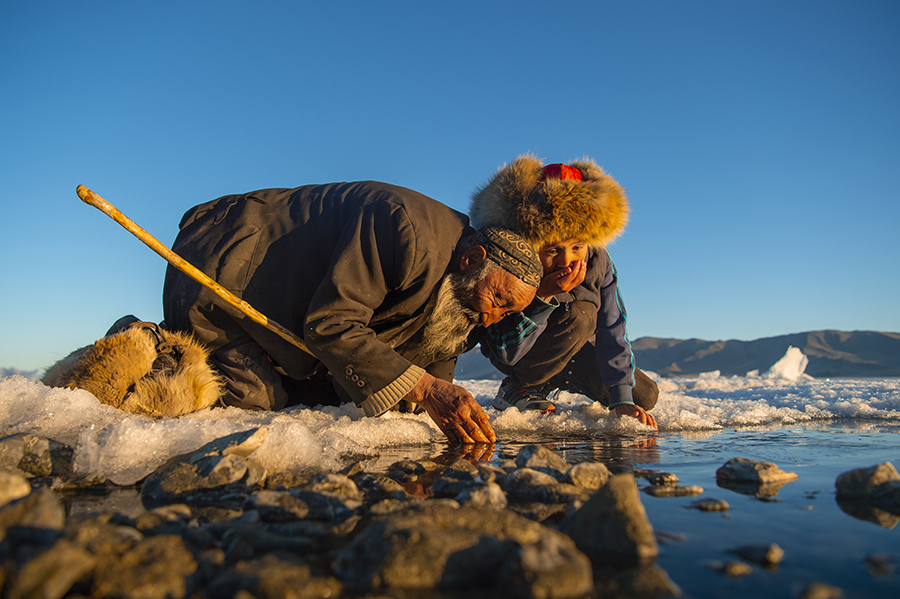 Water- The Secret of Life: This picture was taken near Bayan Olghi in Northeast Mongolia where there is a lake. This lake is a source of life, bringing fresh water for the village people. This spontaneous image of a father and his son was taken when they were drinking water from the lake after a painstaking walk from their home.