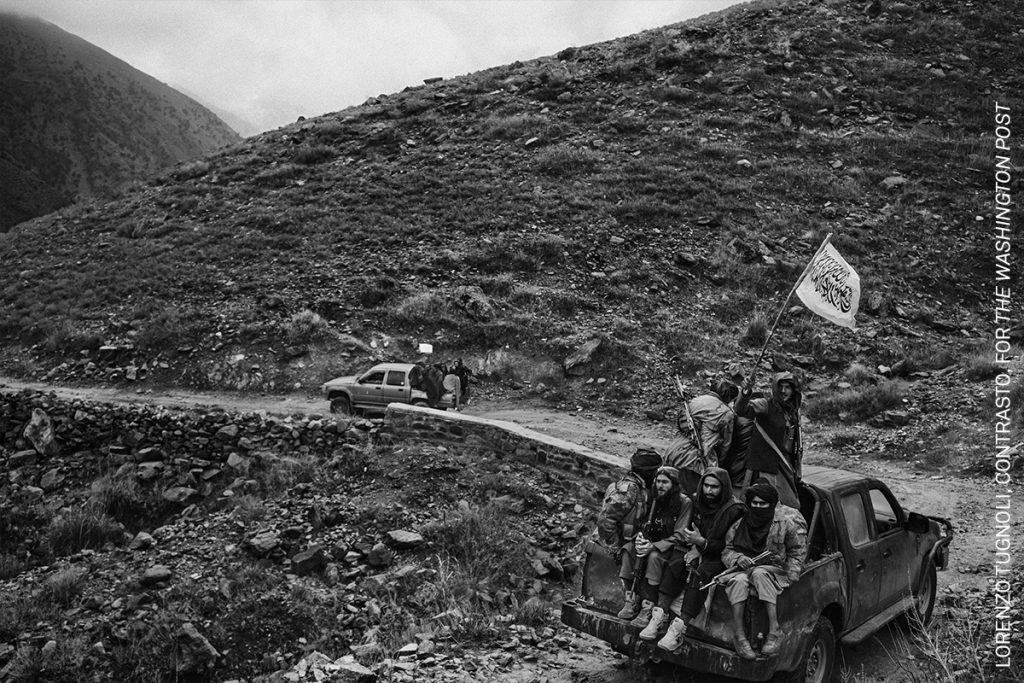 Taliban fighters drive displaying their flag, in an area in Khogyani, Afghanistan, previously controlled by the Islamic State group, on 11 December 2019. Photograph/Lorenzo Tugnoli 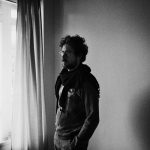 Lorenzo Tugnoli, born in Lugo, Italy in 1979, is a self-taught photographer. Tugnoli worked extensively around the Middle East before moving to Afghanistan in 2010, where he started working with international media and development organizations. Since then, his work has been published by The New York Times, The Wall Street Journal, Le Monde, Newsweek, Time Magazine, amongst others. Photo credit: Omaya Malae

The Longest War: The Taliban made significant territorial gains and increased their influence in Afghanistan in 2019. Eighteen years after the US invasion, and five years since the Afghan National Defense and Security Forces (ANDSF) have been responsible for securing Afghanistan, the Taliban control or contest around half the country, in some districts acting as a shadow government. Peace talks began in January appeared to be nearing agreement in August, but were scuppered by US president Donald Trump in September. Fighting escalated during talks as both sides tried to gain leverage, while on the ground the talks provided the Taliban with increasing political legitimacy. The frequency and spread of Taliban violence left the ANDSF overstretched and in some cases overwhelmed, with a high casualty rate. The escalation of the conflict also severely impacted the civilian population, resulting in high casualties, forced displacement, extreme insecurity, lack of access to education and a weakened public health system. A report published in June 2019 by the Institute for Peace and Economics named Afghanistan as the world’s “least peaceful” country, replacing Syria, though by early 2020 it seemed that a peace agreement was once again a possibility. 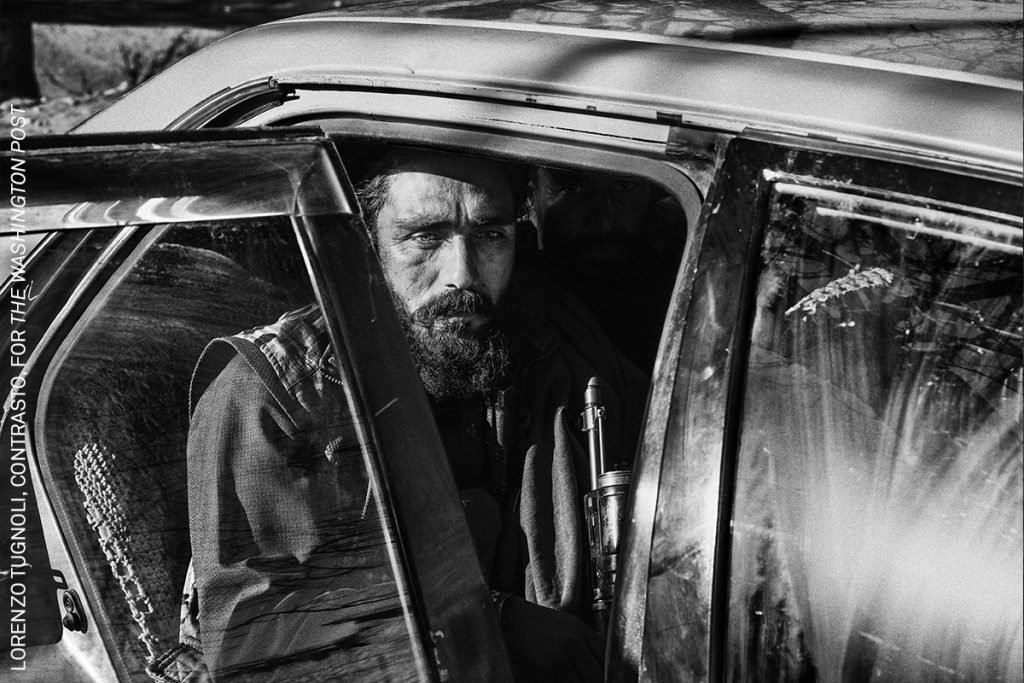 A Taliban fighter sits in a car in Khogyani, Afghanistan, in the morning of 11 December 2019. Photograph/Lorenzo Tugnoli 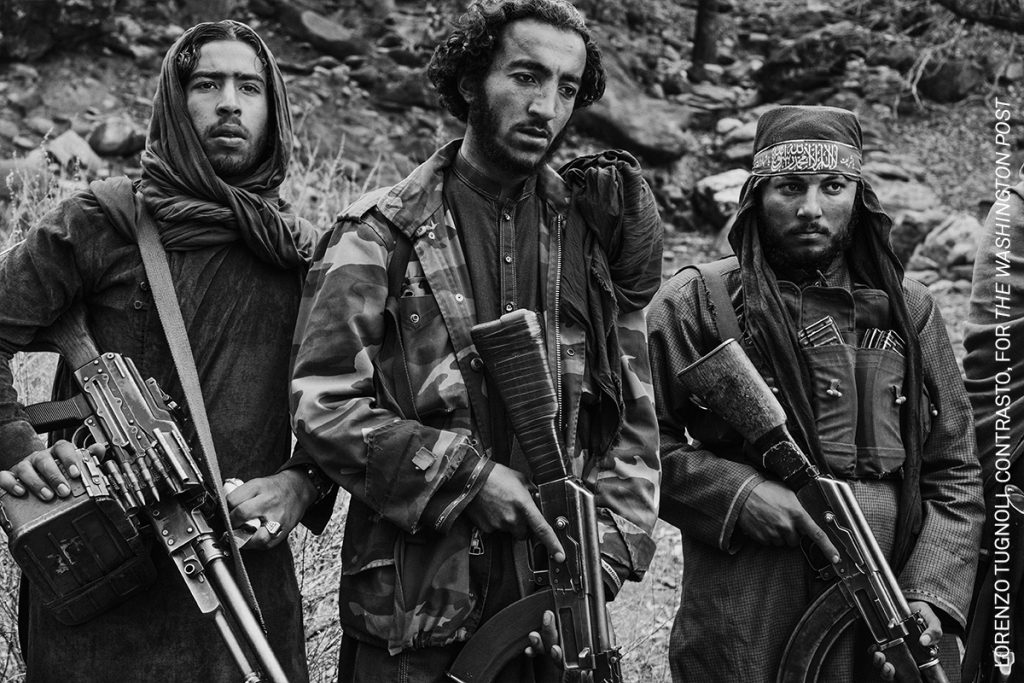 Taliban fighters parade their equipment in a remote hideout in the Khogyani district in eastern Afghanistan, on 11 December 2019. Photograph/Lorenzo Tugnoli 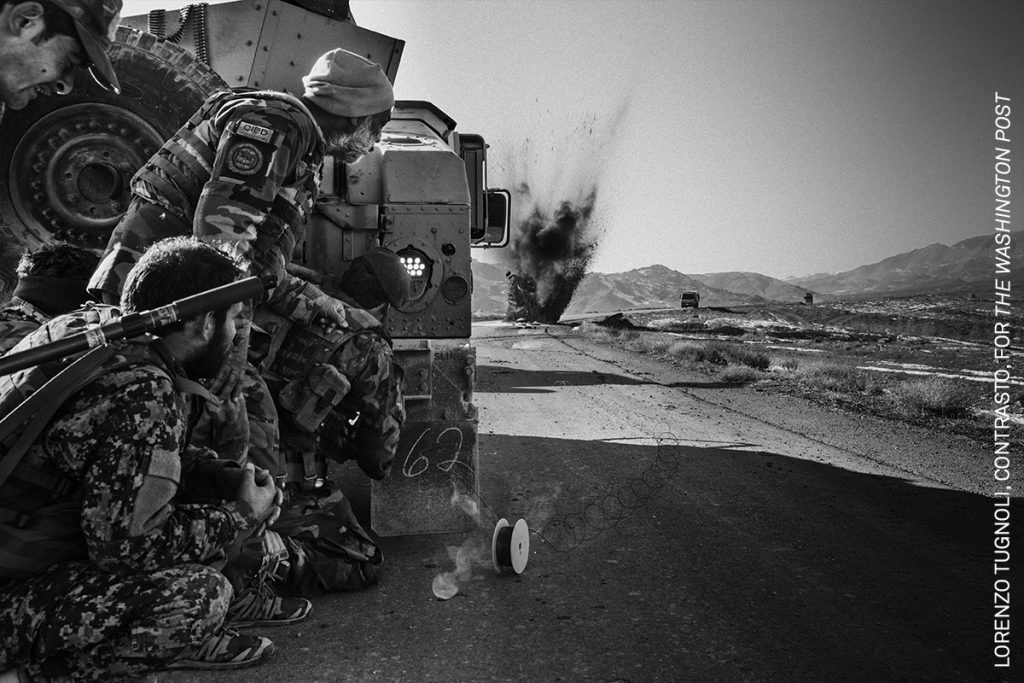 An Afghan National Defense and Security Forces (ANDSF) anti-mine team detonate an improvised explosive device (IED) found on the Ghazni-Kandahar highway in eastern Afghanistan, on 2 December 2019. IEDs are one of the leading causes of casualties among civilians and members of the ANDSF. Photograph/Lorenzo Tugnoli Kevin Antle poses with his staff in a swimming pool they use in a tiger show, at his Myrtle Beach Safari entertainment facility in South Carolina, United States, on 30 April 2019. Tourists pay upwards of US$399 each to join a morning tour, during which they play and are photographed with cubs. Photograph/Steve Winter 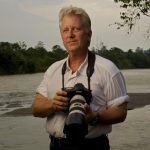 Steve Winter started taking photos as a child while growing up in rural Indiana. After graduating from the Academy of Art and the University of San Francisco, Winter signed on as a photojournalist for Black Star Photo Agency. Since then, he has produced stories for GEO, Time, Newsweek, Fortune, Natural History, Audubon, BusinessWeek, Scientific American, and Stern, among other publications. Image credit: Steve Winter

The Tigers Next Door: Between 5,000 and 10,000 tigers live in captivity in the US. Roadside zoos and other businesses breed tigers and charge guests to pet and pose with them. Individuals also keep tigers as pets. By contrast, there are only 3,900 wild tigers in Asia and 1,659 in accredited zoos worldwide. Many of America’s exotic pets are not covered by the 1973 Endangered Species Act, which applies only to those taken from the wild, not those bred in captivity. Four US states have no laws on keeping big cats as pets, and in ten others, although a permit is required, once secured for a small pet it can be used to acquire a larger animal such as a tiger. By the time cubs bought as pets are four months old they become too large and dangerous to keep domestically, and are sold on, opening concerns that this feeds the highly lucrative illegal international trade in tiger parts. Investigations by the US Department of Agriculture (USDA), which is tasked with enforcing the Animal Welfare Act, dropped by 92% between 2016 and 2018. In June, the US House of Representatives reprimanded the USDA for redirecting its focus from active enforcement to providing “teachable moment” interactions with the public. A federal Big Cat Public Safety Act has now been proposed. It will address the gap in state laws and prohibit the private ownership of big cats, and ensure that if they cannot be returned to the wild, they can be transferred to accredited sanctuaries. 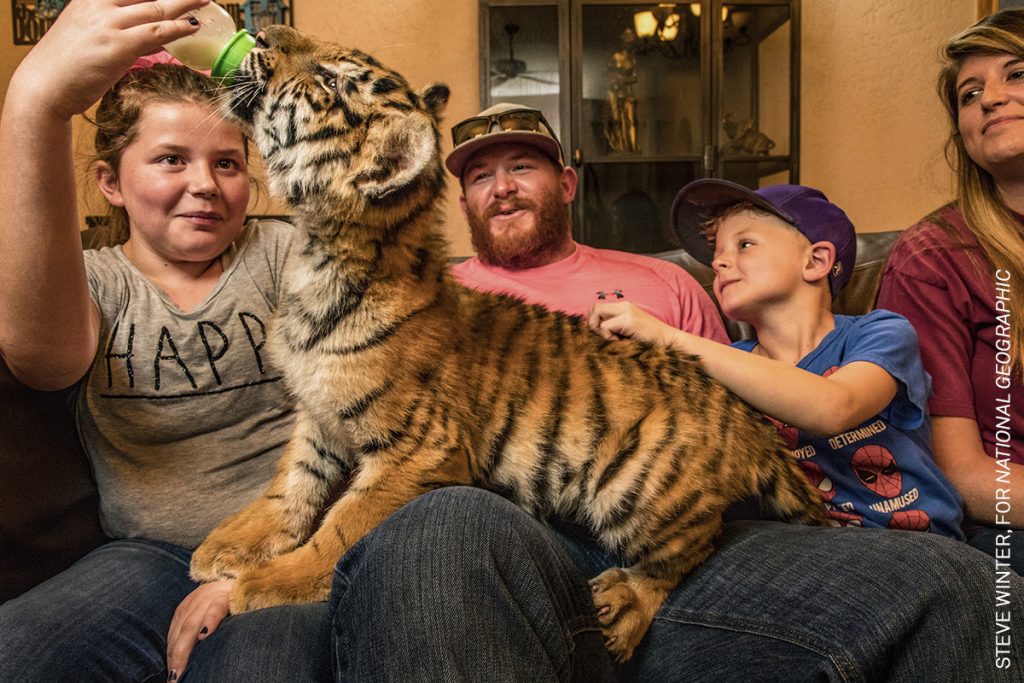 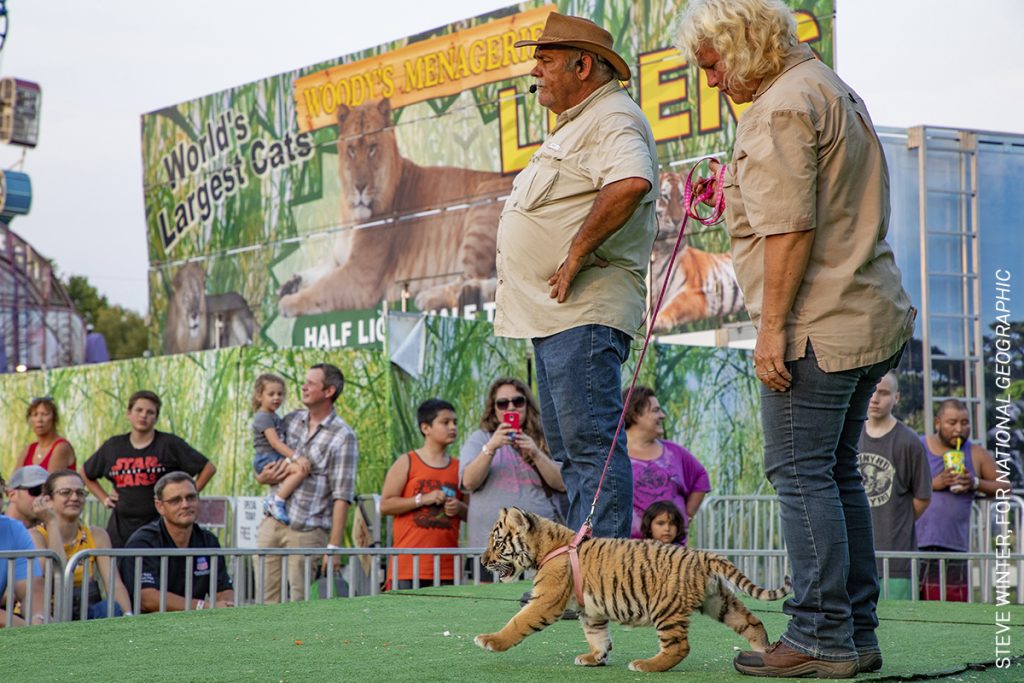 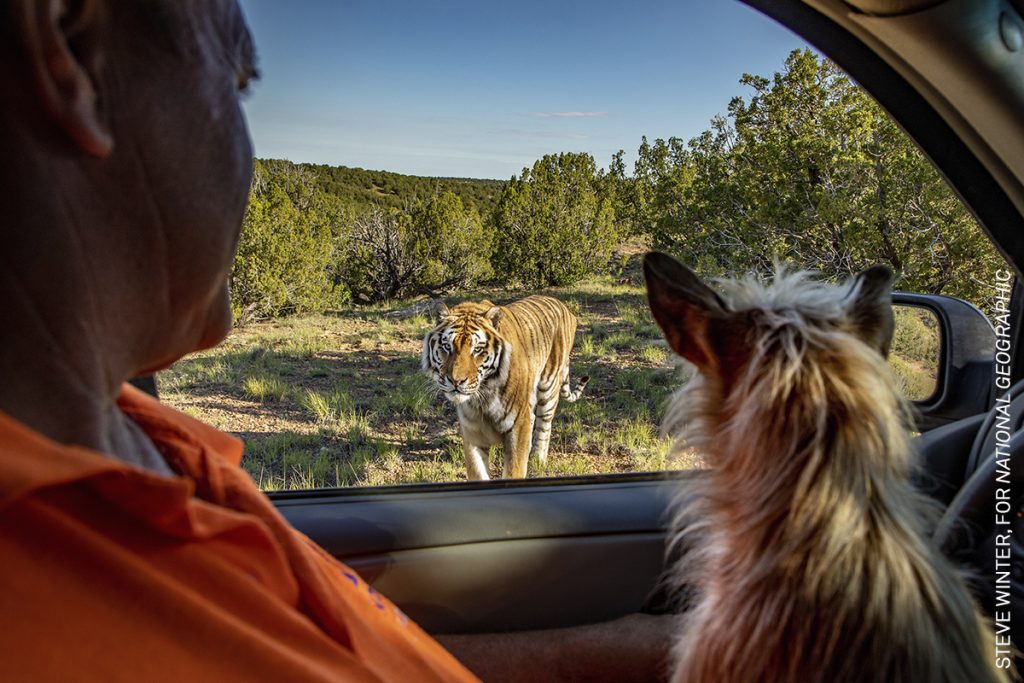 Owner Pat Craig and his dog Little Bit make the rounds of The Wild Animal Refuge, in Colorado, United States, on 12 July 2019. The accredited carnivore sanctuary includes a 4,000 hectare refuge for rescued animals that is not accessible to the public. Photograph/Steve Winter 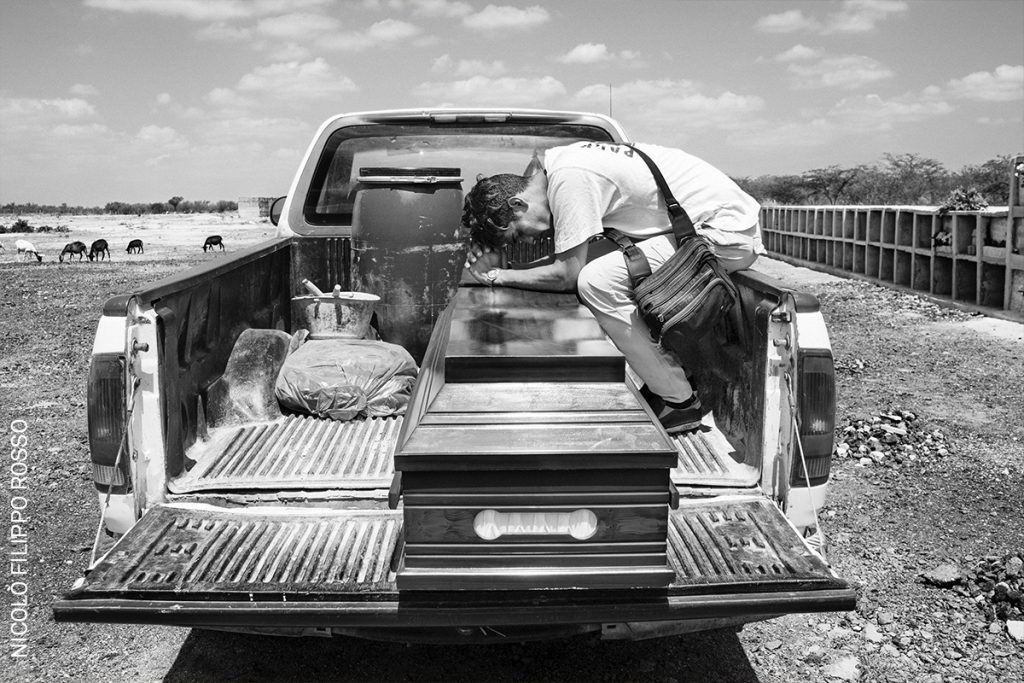 Luis Arevalo, a migrant from Venezuela, sits in the back of a pickup truck mourning his sister Luisana, in Riohacha, Colombia, on 17 August 2018. Photograph/Nicolò Filippo Rosso 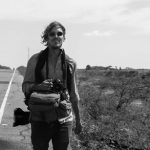 Nicoló Filippo Rosso, born in Italy in 1985, is a freelance photographer living in Bogotá, Colombia. His work focuses on long-term projects in Latin America. Since 2018, he has focused on documenting stories of Venezuelan migrants who cross the border with Colombia to reach other Latin American countries. Image credit: Dania Maxwell

Exodus: A political and socio-economic crisis in Venezuela, from 2016 onwards, led to an increasing outflow of migrants from the country. Venezuelans said they were compelled to leave for reasons of insecurity and violence, lack of access to food, medicine and essential services, and loss of income due to the political situation. Colombia feels the impact of this exodus most keenly. According to the UNHCR, by October 2019 approximately 4.5 million Venezuelans had left the country, of which 1.6 million were in Colombia. Others had moved through Colombia before going on to surrounding countries. Even though Venezuela officially closed its land border with Colombia in February, around 300 clandestine crossing points remained active. More than half of Venezuelan migrants in Colombia lacked regular status, and so had no access to health, education or legal employment. Charity organizations and NGOs helped supply people with medical attention and food, but many ended up in informal settlements or living on the streets. Early in 2020, the Colombian government announced two new Special Stay Permits that would allow more than 100,000 Venezuelans to stay and work in the country, and ruled that children born in the country to Venezuelan parents could acquire Colombian nationality, but vast numbers of people remain dispossessed. 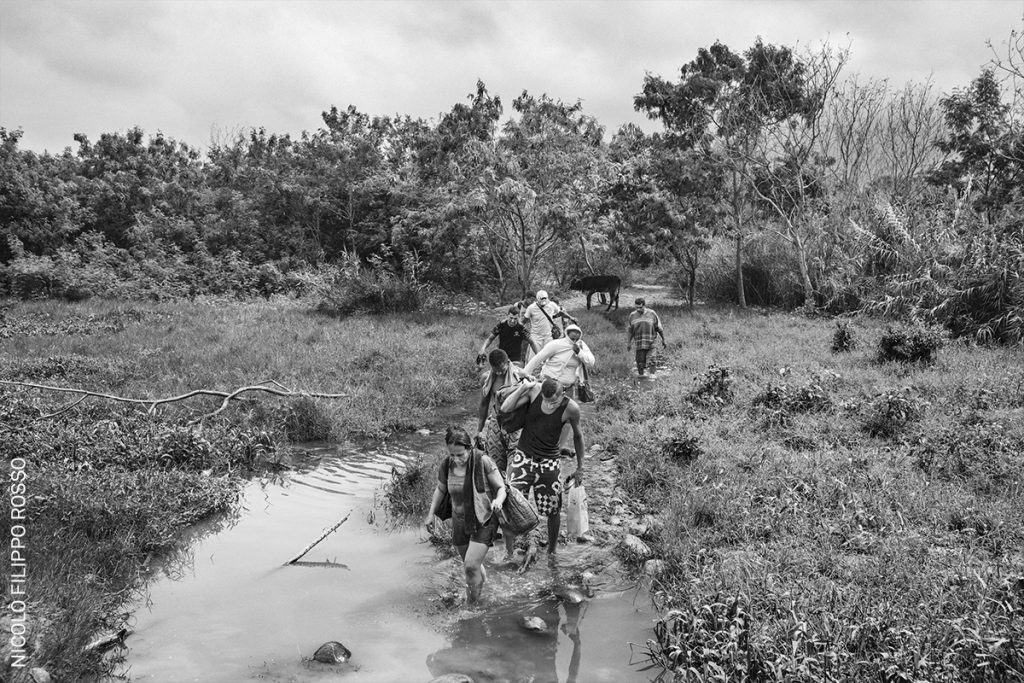 People follow a path to enter Colombia illegally, near Villa del Rosario in North Santander, Colombia, one of the busiest regions for border crossings, on 9 October 2018. Photograph/Nicolò Filippo Rosso 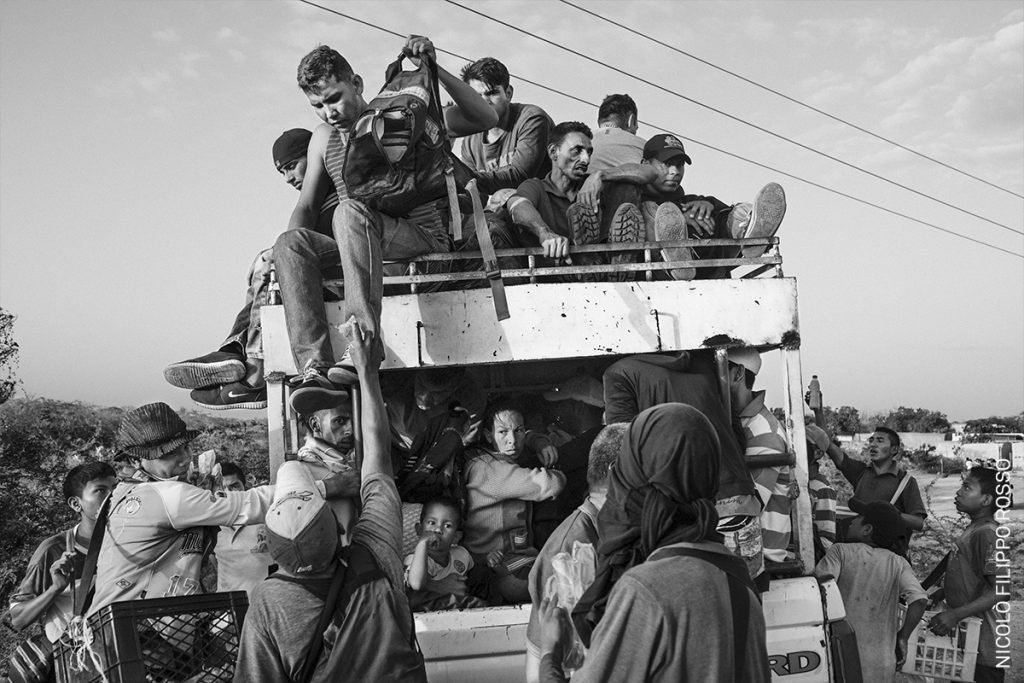 Migrants crowd onto a truck near the Colombia-Venezuela border, in La Guajira, Colombia, on 6 July 2018. Photograph/Nicolò Filippo Rosso 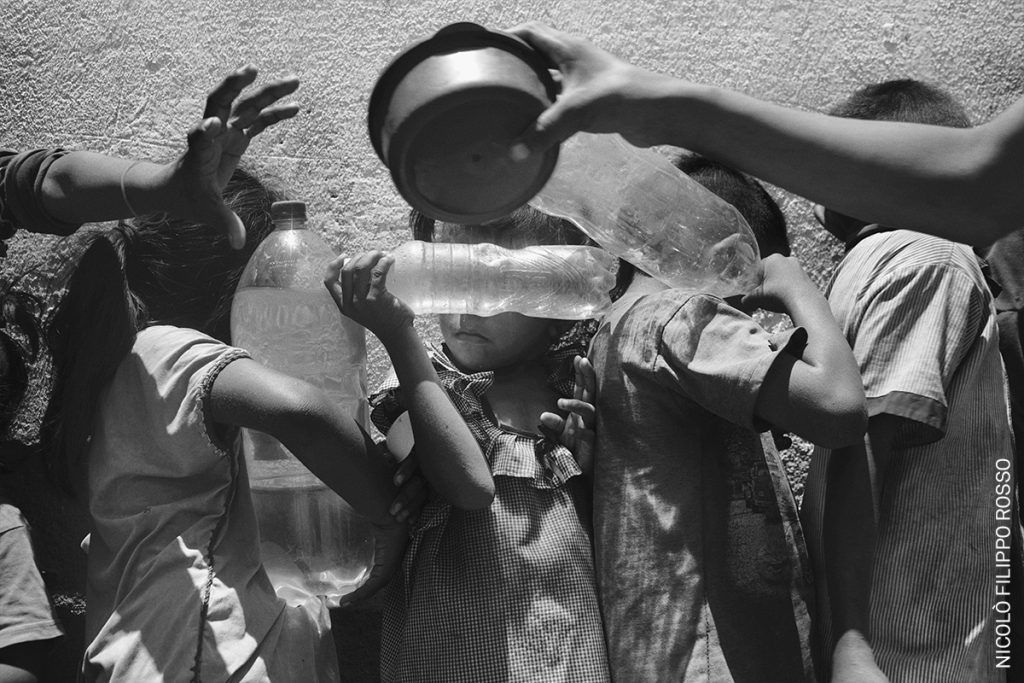 Venezuelan children holding plastic bottles to be filled with water wait in line for a free meal at a charity organization in Paraguachón, Colombia, on 10 August 2019. Photograph/Nicolò Filippo Rosso