Quote of the Week by William Eggleston 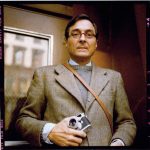 “I never know beforehand. Until I see it. It just happens all at once. I take a picture very quickly and instantly forget about it.” —William Eggleston (1939)

William Eggleston is one of the most influential photographers of the latter half of the 20th century. His portraits and landscapes of the American South reframed the history of the medium and its relationship to colour photography. His initial style was influenced by Henri Cartier-Bresson, Robert Frank, and Walker Evans. He began experimenting with colour film during the 1960s, challenging the conventions of photography. In 1976, curator John Szarkowski mounted the exhibition “Eggleston’s Guide” at The Museum of Modern Art, a solo show of the artist’s colour photographs that was famously condemned by the traditional photographer Ansel Adams. Since his debut exhibition, Eggleston has gone on to produce a number of important photobooks, including The Democratic Forest (1989), which have in turn influenced a younger generation of photographs, including Martin Parr and Stephen Shore. His works are held in the J. Paul Getty Museum in Los Angeles, the National Gallery of Art in Washington, D.C., the Victoria and Albert Museum in London, and the Whitney Museum of American Art in New York, among others.