Quote of the Week by Weegee 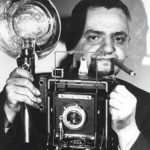 “When you find yourself beginning to feel a bond between yourself and the people you photograph, when you laugh and cry with their laughter and tears, you will know you are on the right track.” —Weegee (1899-1968)

Weegee, a pseudonym of Arthur Fellig, was a photographer and photojournalist based in New York. His work was characterised by stark B&W photography depicting real scenes of the life, crime and death in the city. After working as a press photographer for years, he obtained permission to install a police radio in his car, and he was often the first to make the most eye-grabbing photos of incidents. He went on to publish several books and moved to Hollywood in 1947, where he began making his own short films. He returned to New York a few years later, where he lived until his death.