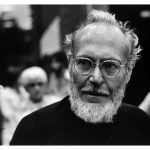 “My camera, my intentions stopped no man from falling. Nor did they aid him after he had fallen. It could be said that photographs be damned for they bind no wounds. Yet, I reasoned, if my photographs could cause compassionate horror within the viewer, they might also prod the conscience of that viewer into taking action.” —W Eugene Smith (1918-1978)