Quote of the Week by Todd Hido 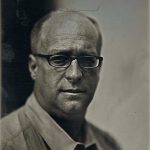 “One of the most magical things about photography happens when you place one picture next to another picture to create new meanings. When you see a picture of a person and another of a place, your mind automatically fills in the gaps as if they’re connected.” —Todd Hido (1968)

Todd Hido is a contemporary American photographer whose work has often focused on the dark underside of suburbia. Hido’s work, inspired in particular by Alfred Hitchcock and Rineke Dijkstra, is characterised by the singling out of “bright spots” amid desolated spaces. His early series Houses at Night (1997) showcased various farm and suburban homes lit with a single light source, lending a sense of urgency and despair to the otherwise ordinary scenes. He has also completed multiple photographic series of prostitutes set in spare hotel rooms, including Between the Two (2008) and Fragmented Narratives (2011). His photographs are in the permanent collections of the Getty, the Whitney Museum of Art, the Guggenheim Museum, New York, San Francisco Museum of Modern Art, the de Young Museum, the Smithsonian, the Los Angeles County Museum of Art, as well as in many other public and private collections.