Quote of the Week by Tina Modotti 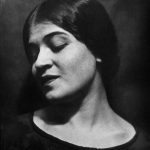 “To know whether photography is or is not an art matters little. What is important is to distinguish between good and bad photography. By good is meant that photography which accepts all the limitations inherent in photographic technique and takes advantage of the possibilities and characteristics the medium offers. By bad photography is mean that which is done, one may say, with a kind of inferiority complex, with no appreciation of what photography itself offers: but on the contrary, recurring to all sorts of imitations.” —Tina Modotti (1896-1942)

Tina Modotti was an Italian-born photographer known for her skillful use of composition and shadow. Her most famous images captured the milieu of Mexico City between World War I and World War II, including portraits of artists and intellectuals such as Frida Kahlo and her husband Diego Rivera.  In 1913, she emigrated to the United States to live with her father in San Francisco. She became involved in acting in Los Angeles during the early 1920s, and entered the circles of several artists including her future partner, Edward Weston. In 1923, Modotti and Weston set out for Mexico City, established a photography studio upon arriving, and subsequently joined the Communist Party. Though Weston later returned to his wife in California, Modotti stayed in Mexico and became more involved in radical politics before being exiled in 1931. She stopped producing photographs after this time, and in 1939, returned to Mexico under a false name. Currently, Modotti’s works are held in the collections of the J. Paul Getty Museum in Los Angeles, The Museum of Modern Art in New York, and the National Gallery of Art in Washington, D.C., among others.