Quote of the Week by Ted Grant 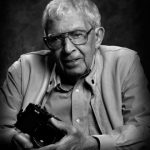 Widely regarded as the father of Canadian photojournalism, Ted Grant has been a seminal figure since the start of his career in 1951. He was instrumental in shaping Canadian newspaper photography, as he was one of the first photographers to use 35mm film, which would become the industry standard. From 1957 to 1971 he worked predominantly as a freelance photographer for the National Film Board Still Photography Division, and was influenced greatly by Gar Lunney, Alfred Eisenstaedt and LIFE magazine. In 1999, Grant was awarded the Lifetime Achievement Award from the Canadian Association of Photographers and Illustrators in Communications. His work comprises the largest collection by an individual photographer in the history of Canada and was honoured by the University of Victoria with an Honorary Doctorate of Laws Degree in recognition of his remarkable and outstanding career.