Quote of the Week by Sarah Moon 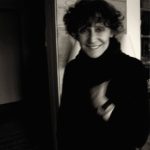 “For me, photography is pure fiction. I don’t believe that I am making any defined statement. Instead, I am expressing something, an echo of the world maybe.” —Sarah Moon (1941)

Sarah Moon is a French fashion photographer who rose to prominence in London during the 1970s. Characterised by her painterly, ethereal aesthetic, Moon’s photographs are often saturated with jewel tones and feature romantic, magical imagery. Born Marielle Warin in Vichy, France, and she and her Jewish family fled occupied France for England when she was still a teenager. Moon began modelling in Paris and London under the name Marielle Hadengue, and in 1970, she took up photography in earnest, adopting the moniker Sarah Moon. She worked extensively with Barbara Hulanicki of the London clothing brand Biba, and later the French label Cacharel. She has also produced photographs for Vogue magazine, Comme des Garçons, Chanel, and Dior. In 1972, she became the first woman to shoot the Pirelli calendar, and since 1985, has focused on gallery and film work. Her accolades include New York’s Clio Award in 1984 and France’s Grand Prix National de la Photographie in 1995.