Quote of the Week by Ruth Orkin 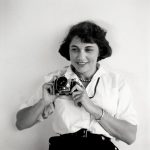 Boston-born Ruth Orkin grew up in Los Angeles, and the movie industry and music were both formative influences. Orkin honed her skills in portraiture by spending the summer of 1946 documenting the Tanglewood Music Festival; later that year, LOOK published her first major photo essay, Jimmy, the Storyteller. She sent the series to Edward Steichen at the Museum of Modern Art in 1947, and he subsequently included her in every group photography show at the museum until his retirement, including the great 1955 exhibition, The Family of Man. Orkin married photographer Morris Engel in 1952, and the couple collaborated on a prize-winning film, Little Fugitive. Their filmmaking endeavours continued through the mid-1950s, and while Orkin continued to photograph, she admitted that still photography “held little interest” after her experience of making a film.